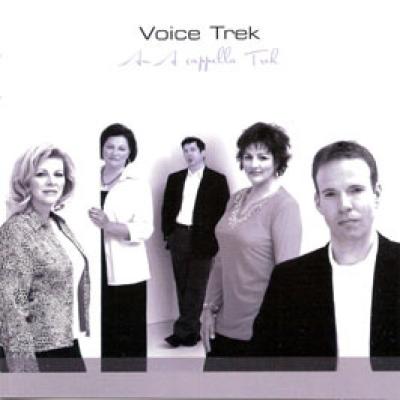 Voice Trek are champions of creamy, breathy, airy, jazzy, blendful goodness. They could teach a masterclass on proper unison singing. They frequently find the silkiest, lushest, most tooth-decayingly sweet material and smooth it over with heaps of extra smoothness. Their chord choices are rich with gentle color notes. There's a market for An A cappella Trek: Show Choir Fanatics. But for fans of contemporary a cappella, Trek is decades behind the times.

When the material calls on Trek's formidable super smooth jazz skills, the match is a win. Both Sides Now, A Little Luck, Fly Me to the Moon, The Windmills of Your Mind and America The Beautiful all fare quite well under the graceful attentions of Voice Trek. But on the occasions where they depart from the extra smooth jazzy material, the group sounds decidedly challenged.

Ticket To Ride wanders uncomfortably, blindly searching for its hipness. Take Five is a nice arrangement with some challenging scat, but the metronomic rhythm fails to swing entirely, and the decision to feature some disappointing VP doesn't help matters. The William Tell Overture is clever if you've never heard of Gene Puerling or Ward Swingle but is otherwise tired and occasionally screechy, despite being meticulously well-rehearsed.

Two songs deserve special mention for their arrangements. First is America The Beautiful whose arranger Denis Allaire deftly evokes the patriotism and majesty of the work in novel expressions of both chord and melody to stirring effect. Although I have to say that including in the liner notes this self-serving comment: "it's the best vocal group recording of this song to date" is of highly questionable taste.

Second is Rosanna, the most stylistically repugnant arrangement of recent memory. Despite a technically excellent performance by Voice Trek, Paul Langford's surgical removal of the heart and soul of the song makes this track wholly unlistenable. My scoring reflects Trek's hard work, but this arrangement is the hands down Golden Turkey winner for its entirely failed merger of show choir and rock.

Voice Trek is too easy for today's easy listening. They're not rhythmically "in the pocket" enough for jazz. They're well-produced and well-rehearsed, but they're noticeably dated and sometimes miss the artistic marks they set for themselves. But when Trek applies its talents to the right material, the talents of these singers make the marriage is a good one. I look forward to a new album with a little more carefully chosen material and a bit less bragging in the liner notes.

Truly this can’t be the same group that put out some annoying muzak dreck that once put me to sleep. And yet the photos on the front of the album are identical to those in the liner notes for Voice Trek’s Voices of Light. Regardless of my skepticism, this is actually a killer album. Ridiculously complex, deliciously textured, and a fun ride through all ten songs.

Riding on the shirttails of Sixth Wave, Voice Trek takes off on its own orbit with contemporary interpretations of American jazz, folk, and rock standards. Ticket to Ride, a fantastic pop-jazzy presentation with a rather prominent but not overbearing bass and kick drum, layers in wonderfully dissonant chords with a vibrant energy that still keeps the integrity of the melody of the Beatles’ original. And who knew (according to the liner notes) Brubeck’s Take Five, one of my favorite instrumental pieces, actually had lyrics penned by the composer’s wife? The first two minutes of the track feature two verses and follow with soprano Shelley Plaster Jwanouskos on a lovely if not overly intricate scat solo. My concerns come in the third minute with arranger Denis Allaire’s take on the difficult percussive riffs that feature so prominently. His, sadly, do not mimic the original, and unfortunately sound more like a cat coughing up a furball. Digestive spasms aside, Take Five is a worthy contribution.

The only aural hint that Voice Trek once released an album of what they call "impressionistic" music is the slow snoozer Both Sides Now that doesn't pick up until halfway through. Even then, this is the weakest piece on An A Cappella Trek. Lest I run out of space, allow me to quickly add in that The William Tell Overture is a comparable if not slightly sparser composition to the popular Swingle Singers’ tune in both arrangement and execution.

And finally, for those who thought Rosanna couldn’t get any better than the knock-your-socks-off 2003 edition by York University’s Wibijazz’n’, this song raises the bar even higher. Where Wibi lacked interpretation, playing the song closely to the original, Voice Trek takes a new direction, making it more jazzy with a swing rhythm and some staccato horn blasts that kick it up a notch. The interlude more closely resembles the TOTO original with layered women’s voices replicating the organs. My only qualm is that where Wibi had strength in numbers, Voice Trek might have benefited from laying additional tracks to add fullness. Nevertheless, Rosanna is probably my favorite piece on the album next to the salsa-beat of Fly Me To the Moon, which does make use of some Brazilian percussion instruments.

Almost as good as the music appearing here are the liner notes which present a surprisingly immense and interesting amount of American musical history about previous recordings of the songs on An A Cappella Trek. In light of the musical execution, it was a thoroughly difficult decision to award this album a 4 when I gave its predecessor the same score. We reviewers don’t get to say this is a "high 4" in the numbers boxes up there, so please let my review persuade you that your vocal jazz collection is incomplete without this submission. Its smooth, cool backgrounds and spot-on solos, combined with an unmatched blend, make An A Cappella Trek one of the stand-outs of my a cappella albums.

At first listen, Voice Trek's An A cappella Trek is a really fine album. Endowed with a strong, rich blend and interspersed with catchy arrangements, it has everything you could ask for from a Real Group-esque coed quintet. But on subsequent listens, one thing becomes all too clear — Voice Trek puts so much effort into its songs that the group ends up cutting all emotional ties to the music.

The main way this manifests itself is in the arrangements, which concentrate so much on complex chord structures that they too often lose track of the source material. Rosanna, an overarranged jumble of styles and textures, is a good example. And in Both Sides Now, what starts as a promising solo by Rae Plaster Allaire with smooth backup chords quickly dissolves into generic vocal jazz. The Windmills of Your Mind, however, keeps its atmosphere throughout a multitude of texture changes.

The solos, for the most part, fail in the same way. Soloists seem so preoccupied with the vocal jazz blend that they forget to emote any of the songs' sentiments. Songs like Rosanna and Ticket To Ride lose a lot of flow and structure due to the soloists' overriding efforts to blend and tune. There's not a hint of edge or gruffness in the whole album.

And last, but not least, the instrumental additions to the album serve only to detach the listener from the power of the group's voices. I'm not sure why the extraneous congas, bongos and shakers in That's What She Says and Fly Me to the Moon were included — it seems as though the group felt the arrangements didn't stand for themselves. In my view, however, they do — and the inclusion of non-vocal sounds only detracts from them. The final song, a cheesily (non-)sentimental rendition of America The Beautiful has full instrumental backing, and totally breaks from the style and mood of the rest of the album.

On the whole, Voice Trek has loads of talent. I just wish they didn't try so hard on this album. There are so many excellent, similar groups that it's hard to recommend An A cappella Trek except to those who have a vested interest in the group's welfare.

To order this album visit A-cappella.com or Primarily A Cappella.