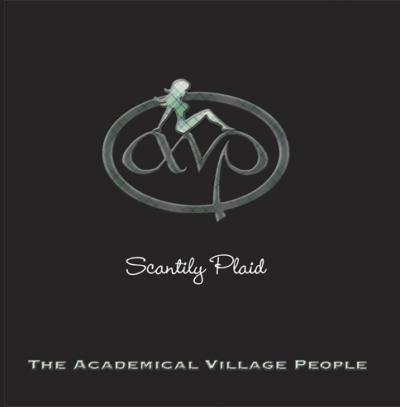 I liked The Academical Village People's previous album (Room Zero, reviewed way back in December 2001) a great deal. Two years later the group does it for me again, and then some, on their newest disc, Scantily Plaid. All of the good things from last time around have stuck around: good blend (Ordinary World), high energy (We Built This City), unusual innovation in song choice and arrangement (Beautiful Mess; Rock My World/Body), and restrained guy-group humor (So Happy To Get Her, the liner notes listing other possible album titles). They're complemented by some signs of maturity: more sensitive interpretation (a melancholy Ordinary World, a reflective Beautiful Mess) and better studio work (throughout: see below on hallways).

Above all, the disc stands out for its sheer listenability. I have the musical attention span of a two-year old, and usually can listen only to the first 30-45 seconds of a song (intro, verse, chorus, bridge and that song is dead to me). But I have no problem putting Scantily Plaid in my player and letting it repeat. None of the songs is annoying (with the possible exception of Doin' Time until the bass kicks in). None of the studio work is overbearing (again, see below on hallways). None of the soloists seems like a democratic pity pick. The music is listenable in an understated way that too much of contemporary (read: studio-bloated) collegiate (read: emotionally undercharged and hugely oversung) a cappella utterly fails to understand.

Some standouts: the ending of Seven Days; the hair-raising blend of Ordinary World; the graceful lead on Beautiful Mess; the groove of Doin' Time; the delicate harmony on Happier; the lead on I'll Be There. In general, I love how each soloist seems entirely aware that he is singing as part of a group. Any ego is only collective.

Oh, yes: hallways. The title of AVP's previous album refers to an acoustically engaging hallway between two buildings on the Virginia campus, whither the group would retire when in need of enjoying a cappella again. A second hallway appears on Scantily Plaid: a hallway where the group RECORDED ITSELF. And ENGINEERED ITSELF. Major kudos to Messrs. Gammon and Garibaldi. Thank you, thank you for knowing how Kate and We Built This City both should sound, and for knowing that the sound is not the same.

Although mixed with help from the ubiquitous Bill Hare, the disc is a real testament to the vitality of which collegiate a cappella is capable on its own, to the ways in which it can capture the feeling of being young and talented and invigorated by the first few tastes of the world, by the ineffable friendships forged with fellow singers, by love of singing itself. Scantily Plaid gives me hope that collegiate a cappella will not soon go the way of barbershop, with competitions and thus groups' sounds essentially determined by a small number of coaches (you may laugh; but ask yourself how many groups competing in the ICCA are curricular and have even part-time professional direction). So long as groups like AVP continue to fill hallways with singing, keeping pace with the sound of the world and letting the world know who they are, we have nothing to fear.

A postscript about postcards: AVP's previous album came to us from a hallway in Virginia. This album purports to come from the highlands of Scotland. If the singers' peregrinations have anything to do with the finished product, I wish them, for our sake, many happy travels to come. Keep us posted, People.

The Academical Village People have reached into their bag of a cappella wizardry and pulled out a masterpiece of an album. Scantily Plaid is the complete package — the real deal — that I've been waiting to hear from AVP. Welcome to the mountaintop, boys ... enjoy the view.

In past reviews of Gracias Por Favor and Room Zero, I was critical of AVP for not finding the balance between performance and production in studio. With the release of this album, those concerns are no longer even remotely valid. This album has everything. It's very well put together: creative, daring, tight, and clean. All of the directors and engineers deserve a big-boy spoonful of praise for this one. Amazing work, gentlemen, a job well done.

The album opens with a fiery arrangement and performance of Kate. Josh Hailey provides a perfect combination of control and style singing lead, and the arrangement by James Gammon and Drew Willson is one of the strongest on the album. This group shows its teeth right from the beginning, and confidently never looks back as the album moves forward.

Almost every song on this album is a highlight: the emotion of I'll Be There and Ordinary World, the comedy of So Happy To Get Her and She Thinks My Tractor's Sexy, and the soulfully stylish Doin' Time (Summertime). AVP gives us the best version of We Built This City that I've heard from any a cappella group, and as a country music lover, the harmony-filled Beautiful Mess became a personal favorite very quickly.

I need to say a few words about Mike Daguiso. There are two possibilities that exist: Mike has either not gone through puberty yet, or he just simply wasn't born with a Y chromosome and is thus singing illegally in an all-male group. This guy is hella high. The only man that I've heard sing in the same stratosphere as Mike is Britt Quentin from m-pact. This kid is an arranger's dream come true, and a very integral part of AVP's overall sound. He will be sorely missed when he graduates.

Okay, so there have to be a few peeves that I have about this album — it couldn't all be good, right? The autotune on the soloists (specifically on Daguiso singing I'll Be There) was just not needed. It may have been an attempt for effect, but when a soloist has a vibrato like Mike does, it becomes a distraction instead. The soloist on Seven Days missed the syncopation in the hook that made the original song a commercial success. The attempted Rock My World/Rock Your Body medley simply missed. Transitions were weak between the songs, and the overall energy in the song slumped from the standards that the rest of the album established. Finally, the liner notes were fun for AVP, but not very commercially appealing. They didn't give credit to any original songwriters, and the group doesn't seem to grasp the concept of margins. Not a huge deal, but the look of your album does reflect upon the overall quality of the album as well.

I could sit here for hours and praise the sounds on this album. It's the new highlight in my collection, and you're all crazy if you don't purchase it for your own collection. AVP has done it ... game, set, and match.

I wanted to love this album. AVP's history of accolades, including a bunch of CARA nods, gave me reason to expect great things out of Scantily Plaid. Technically solid, but overly effect-heavy, the album presents a variety of hits and misses with songs ranging from '80s synth pop (We Built This City) to country (She Thinks My Tractor's Sexy). The selection of Kate, the album's opener, on BOCA 2004 is indeed well-deserved. As a total album, however, I was ultimately unimpressed.

Don't get me wrong. This album is dead on, note-for-note and beat-for-beat. But most of that's studio-produced effect, and it's rather distracting. I think engineering does wonders for today's a cappella albums, but it needs to be done appropriately, and while Bill Hare is a pioneer and genius in the realm of mastering vocal music, most of the music on Scantily Plaid feels as processed as lunch meat. There are some pieces that benefit from such work; the disco/rock Rock My World/Your Body rocks out with a kickin' bass and tight solo, and the popular, soulful Seven Days works because of the percussion effects that so closely resemble those of the original. Looped tracks on She Thinks My Tractor's Sexy (particularly the drum kit) and Ordinary World are ineffective, as they stand out more to my ear than do the solo and backup vocals. The worst offender of this unmistakable studio manipulation is So Happy To Get Her, which, despite clever lyrics, complicates the simplistic and satisfying pop of The Turtles by insisting on a hard-driving bass and parallel percussion that makes the song mechanical and impersonal. It just doesn't sound, oh, I don't know, like it's a cappella anymore.

Arrangements are only sporadically remarkable, leading to few likeable, exemplary pieces. Beautiful Mess (arranged by Andrew Garibaldi and James Gammon) stands out from the rest. The music starts with minimal background, closed syllables that climb to more open "ahs" on the chorus. This song actually goes somewhere. It doesn't end the same way it begins; the music escalates to achieve a vocal peak, both with its emotion and dynamics. James East's vibrant solo is not only pleasant on the ear, but convinces me that he believes what he's singing. Props also go to fellow RARBer Mark Manley for his energetic arrangement of Happier by Guster.

Even the songs have too many internal inconsistencies. The opening to I'll Be There comes off as unexpectedly amateurish with its "doh doh" syllables, and I had to wait two entire verses before hearing Mikey Daguiso's beautiful solo realized at full strength. Yet somewhere around the fifth repeat of the chorus, "just call my name" attempts syncopation parallel to the clearly edited bass and background and the timing is oh-so-slightly off.

I give credit to the AVP for their diversity of musical choices, but (what I imagine to be) their impressive vocal chops are sorely overshadowed by Scantily Plaid's engineering, mixing, and mastery. Too many hands on the equalizer slides? Perhaps. I don't think the average listener will be as perturbed by the studio work as I was (see the RARB Forum discussions on Off the Beat's latest, More Screaming). I like my a cappella cooked well-done, and this was a little burnt around the edges. Some folks may like their meat crispy, but I prefer to taste the juices and texture for what they really are.

Available from the group's website or Mainely A Cappella.