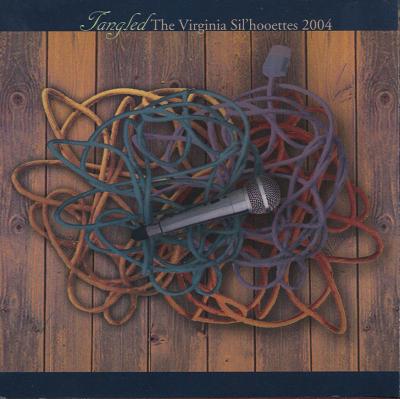 Tangled, the latest release from the Sil'hooettes, was just about what I was expecting from these ladies. It's got well-tuned, pretty backgrounds behind some really nice solo work, but there's a sameness that permeates the album that brings it down a bit.

The Sils have quite good tuning, and the blend of the block is very nice, in a soft and fuzzy sort of way. They have some tempo issues from time to time, with some parts lagging behind the others (Beautiful Day is probably the biggest offender), but they mostly work together well as a whole. There is some really nice solo work on this album, too. The disc opens with a ballsy lead from Olivia Bloom and Melody Akhavan (2003 CARA runner up for best female soloist) graces this disc with another emotional turn on My Immortal, to name a couple, but all of the solo work is good at the least.

All the basics are there, but the album lacks diversity. Despite a repertoire including covers of Stevie Wonder, Martina McBride, En Vogue, and Evanescence, most of the tracks feel as if they are at the same energy level with a similar wet feel to the production. The group's version of Signed, Sealed, Delivered is distressingly missing the kick and funky edge that it needs, so that by the time Don't Dream It's Over rolls around, the sweetness of it is lost due to the lack of contrast. The opening track has a nice edge that sets it apart from the rest of the disc, but the group doesn't really take advantage of song choices to add a dynamic edge to the entire album. This sameness problem is also present within single songs, with not enough growth in some songs. The most obvious example of this is in Where Would You Be where there is no growth after the modulation, leaving the powerhouse soloist, Anne Foster (who does a great job on the majority of the track), unsupported while she's trying to emote and wail in the big section of the song. I suspect this lack of support is largely responsible for the pushing that unfortunately comes through in her performance at that point, leading to some pitch slips.

One last bit of nitpicking before I get to the positives: nearly every track starts off with a big multi-person breath, sometimes accompanied by some lip smacking. This is an extremely easy thing to edit out, and I'm surprised that nobody thought to do something about it in the editing and mixing process.

But that's enough talk of negatives when there are so many positives to point out. For example, the mix engineer, James Gammon, tastefully used an octave pedal on many of the bass parts to add a nice amount of support to the low end of the sound, though the group's low altos do a nice job without the help of the studio, too (Power of Goodbye and Landslide, for example). They make a nice use of the air-popping, beat-box style kick drum sound in several tracks that is a nice thing to hear in a women's group. They also pull out the country feel really well, and it is nice to hear that in a cappella. There are a lot of good things on Tangled. I just want to hear more dynamics and shifts in energy and feel to spice up the tracks. Keep up the good work, Sils, but never stop challenging yourselves to bring it better and harder each time.

I've long been a fan of the Sils; they cover a great range of tunes with aplomb and attitude, and they're one of the few women's college groups that is consistently able to use the studio to its advantage. In many ways, the group's latest disc, Tangled, is a step forward, but it's ultimately too inconsistent to earn my unqualified recommendation.

For starters, no college a cappella group in the nation has a better touch with country music. Landslide, modeled on the Dixie Chicks' wondrous cover, is the best track on the album; Mary Lorraine Stewart, Blaire Reinhard, and Anna Palumbo blend the tripartite lead vocal to heartrending perfection. Martina McBride's Where Would You Be, which will appear on the upcoming BOCA CD, falls short of "5" status only because of some minor tuning issues that mar an otherwise excellent solo by Anne Foster. But the real star on this track is Karen Partlow's arrangement, which should be studied by everyone who joins a college a cappella group in 2005 for its seamless integration of background melodies and the song's basic chord progression. Partlow's arrangement of Jamie O'Neal's When I Think About Angels is too harmonically static during the chorus, but if soloist Tanya Marsh doesn't have a recording contract in Nashville within two years, there is no justice on this earth.

It's been said before, and she's won numerous awards for it, but the Sils were blessed with a hell of a vocal percussionist in Karen Partlow. She never shows off, but on track after track, she lays down the beats with presence and drive to rival the best male VPers in the world. The five tracks on which other Sils percuss are noticeably less rockin'. I'm sure the Sils miss Partlow greatly now that she's graduated.

The production on this album, mostly by recent AVP alum James Gammon, is quite impressive, especially for an in-house job. At the end of My Immortal, Gammon summons up a fierce guitar roar that you won't believe was produced solely from women's voices. He always knows just what to do with Partlow's percussion and has a great feel for when to octavize the alto 2's and when not to. My only recommendation would be that he develop a somewhat lighter touch with the Auto-Tune; a distracting electronic warble is audible from time to time.

Unfortunately, many of the songs on Tangled have glaring flaws. While the end of My Immortal is a triumph from a production standpoint, Kelli Harris' arrangement and Ana Casanova's diffident percussion don't complement Gammon's gorgeous distortion with the necessary drive to make the ending as powerful as it is in the original. Are You Happy Now loses a lot of power because of Melody Akhavan's simplistic percussion and a tempo that's a hair too fast, and soloist Emily Mollick fails to summon up the rage no one ever expected to hear from Michelle Branch, the reason the original worked. (Mollick is much better on Don't Dream It's Over, one of the disc's few non-country highlights.) Partlow blundered by arranging the intro to Signed, Sealed, Delivered literally, and the song is drained of most of its soul as a result. Soloist Amber Payne scuttles a nice performance with incongruous echoes of Michael Jackson.

Partlow's solo on Free Fallin' is unlistenable. As the passable choruses prove, she has a nice voice; the verses are simply far too low for her. On Power of Goodbye, the arpeggios don't quite line up with the beat; this could easily have been fixed in ProTools. And by eliminating Bono's octave-leaping histrionics from her solo, Reinhard sabotages her own excellent arrangement of Beautiful Day, rendering it monotonous. The usually reliable Partlow stumbles on this track as well, offering a gentle rimshot on the chorus when a piledriving full-kit attack is called for.

Several tracks on this album are destined for iPod immortality, and the Sils retain their status as one of the top women's groups around, but for me to recommend plunking down $15, they will have to put together an album consistently as good as the best stuff on Tangled.

It's no secret that the Sil'hooettes have put out another fantastic album. If you're not convinced by its selection as Best Female Collegiate Album in this year's CARA awards (and also a runner-up recognition for Best Female Collegiate Solo that garners its appropriate recognition as a BOCA 2005 track), I hope my RARB review will persuade you. It takes a lot for a women's album to impress me. While all groups face the difficult tasks of putting out a sound that extends the natural range of the voice, creating a successful vocal percussion, and developing and executing intelligent arrangements, it's a rare compilation that attacks each of these charges fiercely and bravely. With bravado, flair, and sass, Tangled is a fantastic listen for all of these reasons.

To be honest, I didn't think it could get much better after After Shock, and yet Tangled wowed me from the first listen. The soloists dazzle with personality all the way from the opening Devils & Angels through the closing Beautiful Day, and everywhere in between. I could rattle off all of the vocal superstars, but I'd just be listing all of the women in the group who appear as soloists. While the choice of song selection is not quite up my alley in terms of genre ('80s pop, country, and what I call chick-rock: your standard En Vogue, Dixie Chicks, and Martina McBride), the arrangements and performance nevertheless are fitting to each style. Blaire Reinhard and Karen Partlow are separately credited with arranging ten of the twelve tracks, each piece with an individuality that creates an overall sense of diversity on the album. My only qualm is the weak Signed, Sealed, Delivered that, unfortunately, doesn't quite deliver as good an arrangement as the others and appears in front of two other tired pieces, Don't Dream It's Over and Free Fallin'. Sadly, the weight of these three songs (a full quarter of the album) brings my overall score down a point to a 4.

These three mediocre tracks aside, Tangled is an excellent submission to the collegiate a cappella world that certainly marks a positive development in female groups. A rather satisfying and delightful listen, this CD is one that will remain in my rotation for awhile. That is, until the next Sils' album comes along.