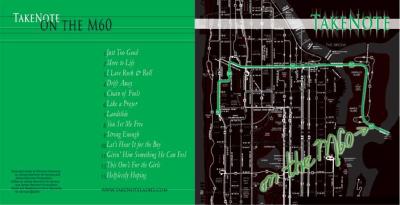 Take Note has the rare all-female winner with its pop release, On the M60. What makes so many women's groups fall short of their male or mixed counterparts? And how does Take Note beat the odds?

They obey the cardinal rule: just because you can sing a note, doesn't mean that you should. Women's groups tend to casually arrange notes that listeners just don't perceive as casual but rather as "screechy" or just "way too freakin'" high. Exacerbating their pedagogical blasphemy, many women's groups don't respect the pyramid of vocal balancing. Consequently their already "too" high notes are also too prominent.

Take Note, by contrast, worships at the temple of the glorious and sexy alto. This religion isn't confined to range but with equal conviction embraces timbre. Take Note belts it out, full on, anytime the song calls for it. That makes tracks like Can't Take My Eyes Off You, I Love Rock N' Roll, Drift Away, Chain of Fools, Like a Prayer, Let's Hear It For the Boy, and Giving Him Something He Can Feel satisfyingly powerful and emotionally grounded. If this is girl power, then boy do I like it.

(Actually I like "it", whatever it's called. It may be that "girl power" is just a phrase that nubile young temptresses emblazon on pink, glittery, extra small baby-tees. Clearly, further research is indicated.)

All this praise for the belters is not to say that the lilting, balladic and grooving tracks that make up the rest of the album don't also have their honored place. In fact, even the two-decades-overplayed classic Helplessly Hoping is sung with a flair and richness lacking in countless other renditions. The invisible hand of artful musical direction has its prints all over this disc. (This is, by the way, an entirely different invisible hand from the one that corrects market pricing issues related to supply and demand.)

M60 gets better with multiple listenings. Go on, try it.

Take the nearest means of transportation (the M60 if you are in Harlem or Astoria) to the nearest place that will get you access to TakeNote's third CD On the M60. AND. BUY. IT. TakeNote comes from Clemson University, which recently burst onto the a cappella scene when one of the men's groups (Tigeroar) landed on the latest BOCA CD and because of a little scurfluffle with last year's ICCA tourney.

The ladies bring with them a wealth of talent and chutzpah that is becoming increasingly apparent on female collegiate recordings. Their sound is warm and mature, especially in the lower altos whose solos pack a lot of punch. The album’s generous budget is evident in the recording techniques. The drumming is adequate (it doesn’t draw attention away from songs), but it’s not terribly innovative. The repertoire skirts the edge of “standard" girl group fare while infusing those unfortunate few songs that slip through with a healthy dose of 21st century femininity (Like a Prayer, Helplessly Hoping, Chain of Fools and Let's Hear It For the Boy).

On the M60 starts off by grabbing your attention with Can't Take My Eyes Off You. The bass rumbled in my stereo without sounding too forced or overly processed. I love Gillian Trimboli's style as a soloist, but she's a bit overdramatic on the choruses where a more subtle touch would have made this track almost perfect.

Jennifer Stephens, on the other hand, knocks it out of the ballpark with both of her solo appearances on the tracks: I Love Rock N' Roll and Giving Him Something He Can Feel. Talk about range of vocal and performance ability. Hers is definitely a name to look out for in the future.

The biggest issue that I have with TakeNote is that only one of the women currently in the group has an arranging credit, and it's a co-credit at that. The arrangements are strong, don't get me wrong, but it rankles to not see ownership in all creative facets of the process. I know the group has made concerted efforts to change its style, commitment, and caliber over the last two years (guided superbly by Trimboli). Until they remove that particular shackle from their feet, they are going to be stuck on the number 4 bus for a long time.

And never EVER end a CD with such a tepid version of Helplessly Hoping. Ever.

Clemson TakeNote's album is a decent addition to the a cappella collection with typical collegiate female fare. Its major flaws stem from the ongoing conflict of soloists who desperately try to push the line of edginess against all-too-soft and sweet backgrounds. Most leads have a deep, raw, raspy timbre that rarely emotes successfully the desired effects these songs should have. Other leads fall flat or try too hard to be rough, sexy soloists, usually performing ineffectively and inappropriately.

While listening to the tracks appearing on On the M60 I kept waiting for a great big wall of sound to come in at the apex of a song, to bowl me over and impress me with the arrangement writing and its execution. Problem is, this never happens. There are modulations that happen, to be sure, but there's no change to the arrangement in rhythm, vowel sound, or background vocals to do any good. Drift Away builds up excitement by offering a "1, 2, 3, 4" count-off near the end, as though the listener should expect a major change to the arrangement that resolves the dissonance between gentle background and the irritating soloist. (I hesitate to add that before looking in the liner notes, the lead on Strong Enough also annoyed the heck out of me, and I am only learning now that it's the same woman.) Instead, most of the women come in on the chorus in only two voice parts, leaving the vocal percussion and a few gals left to continue the "oooh"ing. Similarly, the final third of More to Life sounds exactly the same as the first two, except that it's in a higher key, and that is unfortunate for the soloist, as she struggles to achieve a fullness of sound and centeredness of pitch.

Most of the songs are aurally too hollow in the middle ranges. The alto and tenor voices are often given too few open syllables like "ah" or "oh", and consequently they hide between the outer sections. A better blend is achieved in Drift Away, when everyone is singing on "ooh" (albeit in parallel movement). There are a few pieces here where this technique actually works, however; the arrangement of Chain of Fools is more soulful with the balance of voices near the bottom of the female register. The remainder of songs on the CD are steered by mechanical percussion, predictable arrangements, and are abnormally bottom-heavy. Let's Hear It For the Boy exemplifies all three of these issues.

My favorite songs on the album were actually those that have been made standard in the female collegiate repertoire, like Giving Him Something He Can Feel. Jennifer Stephens takes a respectable turn at the En Vogue number's soulful lead. I also enjoyed the rolling background vocals and sweet-but-not-sappy Landslide, the single track on the album with a progressively changing arrangement that deepens the texture of sound throughout the song.

I've never really heard a group with this kind of soprano problem: I have a feeling I'd have liked this album a lot more with arrangements that actually give credit to their ability to sing a melody. I'm actually going to recommend less energy on the part of the soloists. So take note, TakeNote. Step back and relate your solo to the style and feeling the song intends to project. Pop some more excitement into the dry arrangements and have the backgrounds open up more on wider syllables. The consistency of sound between lead and backup will make TakeNote's next effort easier on the ears. The current release is one to pass over.

To order a copy of TakeNote's On the M60 please visit their website.