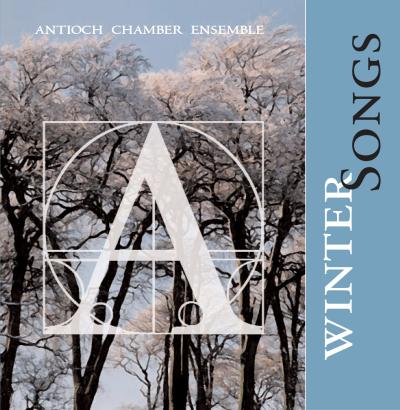 The first time I listened to Winter Songs, I was captivated by the jagged, energetic chords that open the disc. The Antioch Chamber Ensemble, based out of Summit, NJ, has a beautiful, lyrical sound that works well with the 20th century choral music they focus on here. But classical music is admittedly not my forte, and I did my requisite background check to see if I was off the mark.

Cue to group website. A group chockful of accomplished singers, nearly all who graduated from Westminster Choir College. Appearances on PBS and with the New York Philharmonic. Praise from the composer Lauridsen himself.

Feeling encouraged, I returned to my stereo and put on the CD again. And again. And again. Antioch's sound is the most powerful for me in Lauridsen's opening song cycle. They also shine in lovely arrangements of classics, bringing a chilling darkness to the Coventry Carol and an appropriate bittersweetness for Greensleeves. Antioch is not perfect — the franticness of Wassail left me underwhelmed and I wish their version of O Magnum Mysterium had lingered a bit more instead of rushing by. But these are nitpicking comments for an ensemble whose technically superior instruments leave many groups I've heard in the dust.

The melancholia of Winter Songs may seem out of place as the seasons warm up in Antioch's home geography, but their music resonated for me — and now I have a perfect soundtrack for when the chill comes back into the air.

Quite honestly, I'm a little baffled as to why the Antioch Chamber Ensemble has submitted its newest album, Winter Songs, to RARB for review. That's not to say that the music is not good or enjoyable, but it is unlike 99 percent of the albums RARB normally deconstructs and critiques. Technically, it's not even a cappella, as some of the tracks have piano accompaniment.

Winter Songs is an album of chamber music — no more, no less. You will not find any vocal percussion or sounds such as "do do be do" on this album. If you're here for the collegiate sound and the pop/rock songs, then you likely won't enjoy this album and you should steer clear of it.

HOWEVER, if chamber music gives you serenity and peace, then Winter Songs would make a great addition to your music library. I haven't heard much chamber music (ok, ok, I've never listened to any outside of my temple's choir), but I can't imagine many ensembles being better than Antioch. The ensemble is spot on. The group's blend and tuning is flawless. Full chords ring out all over the place. The music makes me feel like I am sitting in the most beautiful concert hall, next to a loved one, with my eyes closed and a smile on my face.

As for the negative points... well, I don't have any. This album deserves 5s across the board. I only gave the "Repeat Listenability" category a 1 because I don't enjoy this style of music. But if you like chamber music, look past my stubbornness and treat yourself to a little bit of Antioch.

When I first heard I had to review an album by the Antioch Chamber Ensemble, I was hesitant. I had never really been a fan of chamber music — when I want classical music, I go for big things like Verdi and Mahler. And when I actually got the CD, and looked at the track listing, I was plain scared. This "who's who" of 20th-century classical music made me flash back to my fourth semester of musicology, where I had to listen to the genre every day but never learned more than a grudging respect for it.

And with all this going for it right off the bat, I put it in my player. And what came out of my speakers was beautiful. I couldn't believe my ears! The music that I had hated for so long was actually affecting me! This was a good album!

For that alone I think the Antioch Chamber Ensemble deserve props. For making me like what I had previously dreaded, for making me actually want to listen to Poulenc and Lauridsen, the group deserves more than a 5. Yes, there are six songs with instruments, but those only serve to highlight just how good the group is on the songs without accompaniment.

But apart from just affecting me, the album is a spectacular example of what a classical choir should sound like. Joshua Copeland's music direction is brilliant — the group has a wide range of energies, from gentle delicacy to controlled raucousness, and he manages it deftly. The balance and blend is outstanding (especially for a live recording), and the tuning is spot-on. The group's diction, even on the French songs, is impeccable. There are only the tiniest hints of solos, but they are enough to show that the soloists can certainly hold their own. In fact, I can't find one thing to complain about!

From the first song to the last, Winter Songs truly dazzled me. And I still can't believe it.