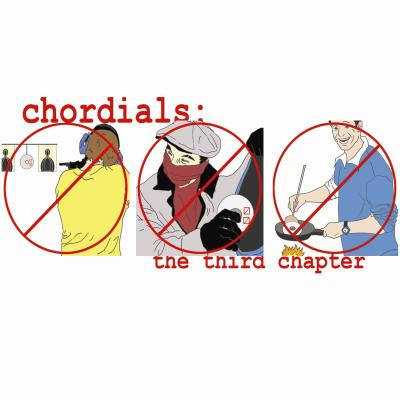 The Third Chapter is a cappella au naturel, or at least what passes for it these days. The Chordials have produced a nice, honest album that probably sounds a lot like they do — and there's something to be said for that. Plus the songs are nice; they got a good beat and you can kinda dance to it.

The songs are what elevate this album a little above the standard muddle. Cake is always a good idea, and Love You Madly is no exception. Precious Things features a great lead by Bridget Tracy, who is channeling Ani DiFranco instead of Tori Amos, to great effect. I'll Be Okay has this great indie feel to it. Plus, it's hard to really screw up I Heard it Through the Grapevine, and Gladys Knight is a great person to crib from. Please Don't Go has a lovely urban soloist, even if the liner notes quit at track 12 (of 14) and don't tell you who it is. The Lion King songs are nice (and if you haven't seen the stage show yet, it's worth the 80 bucks). Even the new age Alegria is a good choice, although the execution can't quite keep up.

You focus on the songs on this album, because the singing isn't enough by itself. There aren't many memorable vocal moments. Bridget is almost the only soloist who made any impression, the backgrounds don't blend so well, and the arrangements are run of the mill. The basses have a pleasant resonance. The percussion is sparse but limited. Ok.

It's not awful. And it's honest. And it's not the same old dreck. Points for that, and good luck to the Chordials as they continue along their way.

I'm not entirely sure what to make of The Third Chapter from the Cornell Chordials — an album that features enough different arranging styles, divergent repertoire choices and varying overall ensemble sound qualities to be mistaken for three or even four different groups.

Group I: a better-than-average a cappella ensemble that performs good, if not stellar, arrangements focusing on a cohesive background sound, and featuring solid, if not impeccable tuning, and good, if not mind-blowing soloists. Best examples would be I'll Be Okay which gets a lovely treatment from Rob Shapiro and a beautiful solo turn from Francesca Decker (though she's also credited with VP so that's gotta make live performance tricky!); and I Heard it Through the Grapevine which, despite some messing with the melody line/chord structure that I can't quite pinpoint (even more than what Gladys did), has a nice groove and a fun feel.

Group II: what sounds to my ear like an "Off the Beat"-wannabe group with super-busy arrangements of somewhat edgier, or at least more alternative material, with lots of unusual and funky syllables and plenty of enthusiasm. Trouble is, Off the Beat's polyrhythmic and poly-syllabic complexity (at least until more recently) didn't get in the way of an overall cohesive group sound with the core chords ringing through behind all the ornamentation. The Chordials get busy alright, but the result sounds like listening to four sectional rehearsals simultaneously. At times, the many varying lines even sound like they are fighting one another for prominence and all semblance of blend is lost. See Paper Bag and Precious Things as the worst offenders.

Group III: a very simple group with overly simplistic and spare arrangements. Might have been an enjoyable listen back in the late '80s just for the novelty of the material, but now they just sound empty and uninteresting. Alegria and You and I Both fall into this category, and it's a shame that they fall back-to-back at the end of the album, followed by the aforementioned Paper Bag.

Group IV: A fun bunch of singers, having a great time, with a really nice blend and plenty of infectious energy to go around. Unfortunately, the Chordials only really become this group during the first two-thirds of their final track which goes from One By One into Circle of Life. The African chanting is rendered wonderfully and literally caused me to sit up in my chair and re-focus my listening energy. The segue into Circle of Life and the performance of that section was less interesting but for just a moment, I caught a fleeting snippet of what the Chordials could be but are not as yet.

To be fair, all of the 3s above, including the overall one for the album, may seem a bit harsh for an effort that has many elements and individuals that offer good work. But the bar in collegiate a cappella, let alone in modern a cappella in general, has been raised over the last several years and even better-than-average often still does not equal "good".

The co-ed Chordials of Cornell University deliver an album almost painfully difficult to listen to with their latest, The Third Chapter. Saddled with sub-par elements across the board, it leaves much to be desired.

The album is fraught with pitch problems throughout. Very few pieces are in tune at all. The worst offender is the modulation in One Sweet Day where the various parts modulate to different keys. Blend is atrocious as well. Basses have a uniform and consistent sound, but all other parts lack any sense of cohesion or unity. Voices constantly and inappropriately stick out of the texture.

The weakest aspect of the album is the soloists, who are just plain bad. Songs are out of soloists' ranges, dreadfully oversung, with a lack of any emotional appropriateness, while sliding all over the place each and every performance. There isn't a single solo I would want to listen to a second time.

Production tends to take the edge off several of the tracks, especially those produced by James Gammon. His treatment especially of the basses makes the tracks more palatable and adds some sense of cohesion to the otherwise disjointed parts. There is little to be done to cover the poor performances and inability to sing in tune.

A few tracks pass muster, including All for Leyna/I Just Died in Your Arms Tonight and I Heard it Through the Grapevine which offers a fresh look at this classic. The bad certainly outweighs the good, however, the album would be much better with everything after Grapevine being scrapped entirely.

The Chordials need to start again at square one, relearning the fundamentals of individual and group singing before their next recording attempt. I hope they can find their footing to meet with future success.