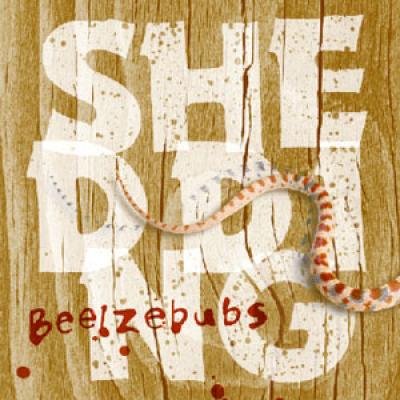 Fabulous new album from the Beelzebubs! Finally, a thoroughly modern album to adore without reservation. The songs are good, the voices are good, the production is good and the overall effect is superb. This really is the a cappella cover band at its best, a collegiate album that can hold its own with the pros.

Shedding is warm where Code Red was cold, and more convincing in just about every way. The backgrounds are recognizably voices in most of the songs, yet they also function as instruments much more effectively and expressively than if they were more thoroughly synthesized. Bill Hare outdoes himself with the production on this one — each part shimmers, and the textures layer effortlessly without getting lost in a wall of noise. To name just a few examples, the background guitar syllables in Let's Get it Started catch the groove perfectly, and the Hammond B3-esque fills in Better Days/Where It's At are inspired. Both those tracks crackle with electricity and they made me feel like dancing, and the mood carries though into Pony. Pop music doesn't get much better than that.

Better Days/Where It's At rocked my world. The transition between the two songs is seamless, carrying the ska beat through as a little extra distortion kicks in. Let's Get it Started is a brilliant opener which sounds eerily like it's channeling Austin Willacy and The House Jacks. 'Bubs alum Deke Sharon and his band aren't expressly mentioned in the liner notes, but I wouldn't be surprised if their sound was the inspiration behind Shedding's new direction.

Pretty much all the songs and all the solos, including the spoken-word lines, kick ass on this disc. Ed Boyer deseves special mention for bringing Paranoid Android to life, despite its tired status as this past year's it song. The album has plenty of breadth without losing continuity and much of the album is danceable, which has always been a high bar to clear in the acappellaverse. Only two songs struck me as less than totally convincing: The Distance, which wasn't quite punchy enough, and You Can't Always Get What You Want, which was pitchy. Even so, they'd get kudos on most other albums.

If you're looking for one a cappella cover album to buy this year, you can quit looking. I doubt you'll find much better than this.

What can I say? It's the 'Bubs. If you're somehow on the fence, just stop thinking about it and get Shedding.

As on Code Red, the 'Bubs' musical nuts and bolts are near perfect. It's an indulgent pleasure to listen to groups like the 'Bubs; I have the luxury of not having to listen for intonation, blend, or balance problems. I'm free to enjoy what they do.

What they do: the 'Bubs are master imitators.

The RARB Forum has focused gigawatts of under-utilized brainpower to hash out the relevant theoretical points and sophomoric quibbles about the nature of a cappella. Is it a genre? An instrumentation? What is it when vocalists simply mimic instruments?

There's nothing simple about the vocal mimicry of drums, keyboards, and guitars. Where some might find imitation to be the highest form of flattery, I find it to be an art in itself. Tracks like Hot in Herre, Shining Star, and Mr. Roboto on Code Red and Let's Get it Started on Shedding, show The Beelzebubs making mimicry into art form.

Creative syllables, world class mixing, and an incredible focus on detail allow the 'Bubs to reverse engineer the instrumental sounds of the bands they cover. At the least, an arranger's first 'Bubs experience should be a revelation in syllable-ization. These guys specialize in making weird, special little sounds. The sonic result isn't mere mimicry — the subtlety of method creates sounds from surreal to serrated to sublime.

Examples: The impeccably tight, well-rounded bass lines of Let's Get it Started and Ladies' Night. The shimmery keyboards and organs and jagged vocal record scratches of Better Days/Where It's At. The signature guitar bouncing of Everybody Wants to Rule the World. The bass line of Pony (most closely written as "oowooyeh wyeeow oowooyeh" - I love it.). The '80s hook of Let's Go as "bell bell bell" with tongue touching the roof of the mouth is brilliant.

Code Red featured a nasal, quacky sound that grew with repeated listens into a cheeky brass section. Shedding experiments with vocal boundaries again, unveiling an aggressive clenched vocal cord sound. Imagine singing air guitar part to some Ozzy Osbourne or death metal tune with lips curled back and head banging. Kind of like that. Like a "duh nuh, duh nuh" sound. Must be hell to sing for more than a few minutes, but it adds some aggro to Someday I Suppose, The Distance, and the explosive bridge of Paranoid Android. Where groups like UPenn Off the Beat seem stuck with formerly avant garde devices like "joh noh", it's good to see some imitation innovation.

As with Code Red, Shedding should be just plain fun to any listener. The experienced a cappella fan will revel in the parade of sonic surprises while singers should be taking notes. If there's anything the 'Bubs have yet to master, it's infusing every song with intensity. Soloists can be a little drab, literal, or understyled now and again. Though the background singing is always engrossing, the discipline required to achieve the 'Bubs' tonal effects leaves a few songs just a little less than taut.

At what point does an instrument imitating a cappella group become just another cover band? Is accurate imitation an art form in itself? Is a cappella just an outlet for non-guitar players to pilfer the glory of real rockers? Frankly, who cares? I'll be happy as long as groups like the 'Bubs keep inventing creative devices to surprise my ears.

Once you release an album like Code Red, it's hard to follow up. You've raised the bar for a cappella covers and production so high that it's nigh impossible to beat. That impeccable recording has made the Tufts Beelzebubs the group to beat. The 800-pound gorilla. The Steven Spielberg of a cappella, if you will. But sadly, Shedding is more like "War of the Worlds" than "Saving Private Ryan": it's good — great, even — but we've seen (heard) it all before.

Don't get me wrong; this album really is still amazing (hence its scoring). The Bubs take us from raucous energy to clever arranging to powerful soul to an '80s epic to '70s smash hit to delicate sensitivity. And that's only the first six tracks!

After that, though, diversity takes a back seat to popularity. Most of the next seven songs are practically the same; brash, guitar-driven tracks that could all substitute for each other on a shorter album. Epiphany, a nice ballad, is an exception, but isn't strong enough to stand out on its own.

The last two tracks pick up a bit — Paranoid Android is notable for its sheer ambition, and You Can't Always Get What You Want is an a cappella rock song that sounds acoustic — not a small feat, and Bill Hare should certainly be commended for his touch.

If this had come out 3 years ago, I'd be raving about it for ages. I love the guts (not to mention money) it takes to come out with a 15-song album. I love that I have an album with Phish, Ginuwine, Green Day, Coldplay, The Rolling Stones, and the Black-Eyed Peas songs all on it. I love how most of the songs sound and feel just like the originals, even. But after a group comes out with an album as perfectly imitative as Code Red was, I'd expect them to move on to different ideals. The Bubs haven't, so I'm left waiting for their next evolution.