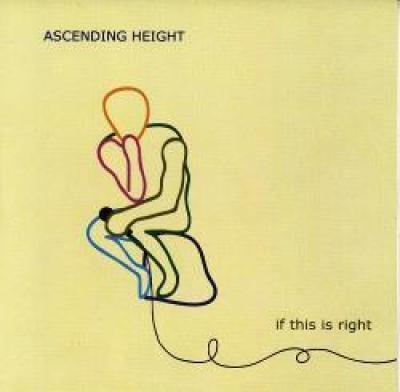 Wanna get blown away? Go here. Ok , now buy Ascending Height's If This Is Right and tell me that you can believe these guys are making these sounds. Can even one of them grow a moustache? I seriously doubt it. But tell me that Superman doesn't pull at your heart strings. Tell me that Layla doesn't sit back and groove. Tell me that Mind Burn doesn't get you moving.

Ok, sure you'll see a little help from the big boys and the big toys: experienced producers like Tat Tong on mastering, two arrangements by Deke Sharon, gentle use of autotune and lots of VP cut and pasting. That's pretty much standard and as it should be.

Now get blown away by Robert Dietz. He's credited with eight out of ten arrangements. If that wasn't enough, he's produced and engineered eight tracks. And it's good. Real good. Not just good for high school. Actually honestly good. Good for anyone. That's far beyond most college a cappella groups and about half the pros. Whatever college group gets their hands on this guy after graduation is lucky indeed.

Not surprisingly, these young singers sound young and even a bit nasal, especially the tenors. But the song choices are so appropriate for the voices, so well-chosen, that these flaws are rarely exposed. When the flaws do get exposed, there are a few doozies, strong reminders that perfection will take a bit more work. These obviously knock down the numerical scores. So what? My advice to the group is keep practicing, keep working hard and give yourselves an A+; RARB grades you against the world of a cappella, not just high school groups. I'd certainly hope that you have some room for improvement between AH and The House Jacks! But even so, Ascending Height is a wake up call to anyone who thinks that true high school a cappella — sung, arranged, produced and recorded — isn't alive and kicking.

Let's add another group to the ever-growing list of high schoolers to watch out for on the collegiate and professional circuits over the next decade. Ascending Height is a five-boy vocal band from Ithaca, NY, out to make a name for themselves. They succeed with their debut disc If This Is Right. The recording is far from perfect and they don't rank on the same level as Nine or 5-Alone, but as one of the few self-directed groups of high school-aged kids without school support or affiliation, they are pretty amazing.

I don't have a lot to say about the album actually, the major (but understandable) disappointment with the disc is that most of the soloists' voices haven't matured well to carry off the songs they try to sing. I would love to give split scores because the background vocals are supreme, putting a lot of collegiate groups and some semi-professionals to shame, but with the soloist it all comes crashing to the ground. Most notable is the opening track Harder To Breathe: Ernie Fontes tries his best to capture the swagger of the original, but really, his reed thin voice comes off as a bit comical. He is great on the more suitable Istanbul, and I'm sure he will develop his instrument in the future to a great degree.

On all of the tracks, it was tough deciding if I was going to award what was happening in the background or carefully critique what was in the forefront. And it was a tough call. Layla was the most difficult to accurately score as it was almost a perfect track, but then the rhythmic placement issues of Joey Golinker made it difficult to enjoy the song. Don't hit the 1 and 3 so hard next time.

In comparison, they have great things going for them in terms of arrangements, vocal percussion, production values and Robert Dietz. Dietz is undoubtably the mastermind behind the group, and his enthusiasm is ever present. His vocal percussion is tight and unobtrusive, his solo on Superman is noteworthy, he arranged eight of the ten songs — any of which I'd be happy to sing — and he penned the infectious original Mind Burn. The kid has a lot going for him and I can't wait to see where his path leads.

Tat Tong has got to be congratulated for the masterful mixing and mastering he did for the album. He has a deft touch at coloring the sonic palette of the performers, making each track contemporary without being overly digitized. In fact, Harder To Breathe opened with such a captivating sound that for a few seconds, I'd forgotten that it was a group of 16 & 17 year-olds making such joyful noise. Looking forward to hearing more from him as well. Unfortunately, Tong's production is so good that the last track of album uncovers what I was hoping wasn't the case: some of the great tuning is manufactured. The guys are going to have to work on their tuning a lot as the live version of The House Jacks' Dive Into You featuring Deke Sharon singing backup nearly falls apart from not having a strong pitch center.

If the guys stick together after graduation, I can easily see them following in the footsteps of Vocal Tonic, Lunatic Groove, five o'clock shadow and the House Jacks and taking their place at an ascended height in the a cappella upper echelons.

For what it is, If This Is Right is a pretty decent album — it has a good mix of songs, some nice arrangements and a good solo or two.

If This Is Right is the debut album from Ascending Height, a group of five high school guys from Ithaca, NY who just decided one day to start their own a cappella group outside of school. It is far from perfect, but listen closely and you will find some gems on the album.

The arrangements are very nice and work well for the group. Robert Dietz (who arranged all but two of the songs) has a good handle on the basics and what fits his group. He also does all the vocal percussion on the album, and turns out the album's best lead vocals on Superman and Mind Burn (which he also wrote). Should he choose to sing a cappella in college, he will add a lot to whichever group is lucky enough to land him.

The same can be said about bassist Crawford Doran. Not only does he have a nice, rich, deep bass tone, but he also pleasantly surprises with a great solo on Friend Like Me.

The rest of the soloists are lackluster, however, which is quite surprising because the backing vocals are pretty darn good on every song. This leads to two conclusions: 1) Tat Tong did a superb job mixing the songs, or 2) some people are just better out of the spotlight. I'm going to guess it's some sort of mixture of the two, with more weight on the latter.

If This Is Right could have benefited from a better arrangement of the track listing. The best songs are stuck in the middle; put Peace Love and Understanding at the top of the disc and you'll get the listener's attention right away. Follow that up with Superman and Layla as the next two tracks, then mix up the rest and the album would have been that much better.

Regardless, I'm impressed with what these five kids did. Some vocal training, better soloists and maybe a sixth member could really elevate Ascending Height to the next level. I'm curious to hear their next studio effort.