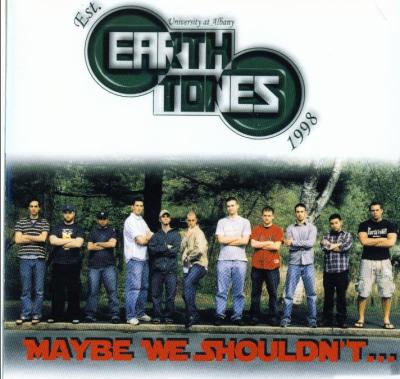 When a now very successful Broadway producer opened a play entitled What's Wrong With This Picture back in 1994, it prompted one critic to respond "everything but the frame." My response to the SUNY Albany Earthtones Maybe We Shouldn't is not quite as harsh, but this is nevertheless a dangerous title for what is a really mediocre CD at best and a good portion of the cause are mistakes that a cappella groups, in this day and age, "shouldn't" make.

Always first must be the music itself, and here the Earth Tones sadly fall short in multiple areas. The arrangements, almost without exception, are a collection of voice parts that almost never blend together into a single unifying groove. The block-chord, unison rhythm simplicity of much of Superman is as close they come but after multiple listenings, it seems, at least to my ear, that what's lacking in most of the arrangements is a fundamental, establishing chordal center. Typically, the arrangements feature a slightly pitchy bass line (in moving parts particularly), a kick-drum-lacking v.p. line, one or more moving tenor lines soaring a bit out of range at times, and perhaps someone singing backup with the soloist. What's missing is an establishing background chord that centers the song and sets up the "feel". It doesn't help that tuning issues abound, both in individual voice parts, and in the overall blend, and that there is an overall passivity to the singing that meant the material never grabbed my ear — but at the core, the arrangements let these guys down before they ever set foot in the studio.

Speaking of the studio, these guys need to find a better one. I appreciate the financial challenges that face student groups and the ways to perhaps deal with such issues have been discussed ad nauseum in the RARB forum. But for a group with flaws in their material and performance, a good producer, engineer and/or studio goes even further than it might for an already first-rate ensemble. The sound in general on this album is terribly thin and the musical mistakes that were allowed to make their way onto the finished product are borderline inexcusable.

Lastly, and I feel like a bit of a broken record, but it is borne out and time and time again: you just can't sing everything, and when you do pick songs, pay attention to those that have been done again and again … and again. Most egregiously, Come Go With Me just sounds bizarre sandwiched between We Are The Champions and Boston & St. John's but there are other odd juxtapositions. And why oh why do we need another Two Princescover? Add in the ages-old One More Minute and the also overdone Breakfast At Tiffany's and you'll find yourself wondering if these guys aren't just a few years behind the curve.

Best I can offer is that this is a noble effort. No doubt their friends, families and fans at SUNY Albany will be very proud. But for the rest of the world, you're not missing anything.

The title of this album is such an obvious and easy dig that I will leave it alone. But only because you shouldn't kick a guy (or group) when he's down.

Maybe We Shouldn't is, in a word, awful. The main culprit here is the Earth Tones' tuning. This is not a slightly off chord here and there. This is not the occasional soloist missing his approach to that high note in the bridge. This is horrendous, rewind to confirm what you thought you just heard, makes your pets hide in the other room tuning. And it sinks just about every track on the album to some pretty low depths. The cacophony of the We Are The Champions verses, the falsetto backup in Boston and St. John's and Trouble, the mismatch of bass and doo-wop solo from measure one in Come Go With Me — this is tuning of comedically bad quality.

Where the pitch isn't tripping up the Earth Tones, the soloists and the rhythms are. What's worse than a badly tuned opening? A badly tuned opening where individual parts fail to sing in unison, a la Superman. And regardless of whether the group is pulling together some cleanly tuned singing or not, they're typically led by a listless and unconvincing frontman. And no guys, a memorized (and mechanical) scat section doesn't get you points (another point of distinction from the lovely Come Go With Me).

What puzzles me the most is the Earth Tones' choice of repertoire. While the group doesn't possess many strong soloists, they surely could have picked more songs that their singers can actually hit and sink their teeth into. For example, the soloist's flat whine on We Are The Champions turns into a relatively rousing turn on Invisible Touch. Though a restricted range wouldn't necessarily inject a spark into the proceedings, at least listeners would be spared the wince-inducing misses up top. And a fifteen song tracklist would overwelm the quality bar of even the best groups out there. So cut down next time, and really focus on a few songs you can really be proud of.

I can't in good conscience even deem this one a yearbook album. Listeners, fans, family and friends — no you shouldn't.

I hate when an album title becomes sadly ironic. There have been lots of examples of this in a cappella, so I guess I hoped groups would have learned by now. But it seems the Earth Tones didn't get the memo — Maybe We Shouldn't is one of the saddest titles out there: the list of things they "shouldn't" have done is pretty huge.

Maybe they shouldn't have isolated themselves from the rest of a cappella. If they hadn't, they'd know that almost all the songs on the album have been done hundreds of times in the past. They'd know that the a cappella community is always willing to answer questions or lend a helping hand. They'd know, most of all, that a self-respecting college group doesn't put out an album they can't be proud of — I really can't imagine anyone being proud of this.

Maybe they shouldn't have a website that doesn't work; I know nothing about this group — I don't know if this is their first album or if it's for charity or if it's all just a big experiment to see what kind of a rise they can get out of us reviewers.

Maybe they shouldn't have skimped on the production research: there are cheap options for re-recording or fixing songs so that at least one track is in tune (I'd concentrate first on the solos and the basses, and go from there). There are ways to record songs to a fixed tempo. There are actual producers who can make your album sound like more than just a live concert. In a very small, unforgiving room. After a late night.

But I digress. Despite all this, there are some promising spots. The vocal percussion is, on some songs, above average and interesting. If the mixer had mixed it at all, it could really be a highlight. Some of the soloists, especially Steve Meyer, Bill Hance, and Brendan Schweda, have loads of vocal talent. But this doesn't raise the album past the shallowness of the mix, the lackluster energy, the dismal tuning, and the poor song choice. I frankly don't understand how anyone could have thought it was good enough to green-light it for duplication ...

I've been dreading one of these albums since I got on RARB — I didn't know how I'd feel. Now I know — I just feel sad. I feel for the Earth Tones, knowing that they have to live with this album for the next however-many years. Maybe they shouldn't have put out this album in the shape it's in.