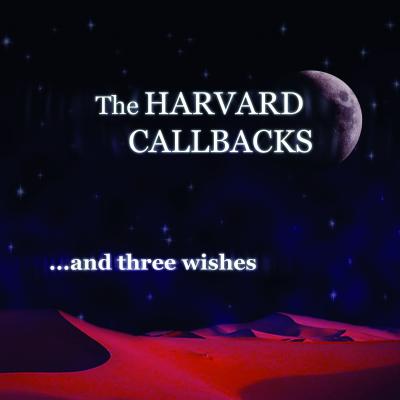 The co-ed Harvard Callbacks deliver another solid offering with their latest, ...and three wishes. They capitalize on the success of 9 to 5: The Late Sessions, especially tapping into the strength of their R&B performances.

The Callbacks do R&B better than any collegiate group out there, and it clearly shows on such tracks as Ain't No Sunshine and the difficult but well executed 5 Steps. This has to do mainly with their soloists, especially Tony Chin-Quee and Zach Raynor who sing R&B the only way it sounds good — by making it seem effortless.

A track I found myself surprised to like is Don't Change Your Plans with Theresa House sounding absolutely perfect in the solo role; originally by Ben Folds Five, I can't even imagine it with a male soloist now.

My rating of the soloists is diminished by the tracks A Thousand Miles and especially I'm Gonna Make You Love Me which was nasal, strident, and annoying to listen to. This album would be much better with the removal of this track which is subpar all around.

Arrangements tend to be above average, especially tracks done by Ben Jackson. They have a wide variety of sounds and syllables and are intricate and well-paced without sounding too busy.

The backing vocals were the weakest part of the album. The sound seems to me a little washed-out — devoid of emotion and strident in delivery. This is especially true of sustained parts and more true of the women than the men. Whether it was recording, editing, or delivery, the background vocals just didn't pack the punch and sparkle of 9 to 5: The Late Sessions.

Still, a great and original line-up of tracks and usually excellent soloists make this album a pleasure to listen to despite the low energy of the backing vocals. It's definitely a CD I'll listen to again.

Before I even got ...and three wishes in the mail I was prepared to write my review with wishes I had for the Callbacks to use in improving their album, but sincerely, none of them were really needed. This is a sassy, smart, and overall fun listen. While R&B is really the Callbacks' strongest genre (Ain't No Sunshine, 5 Steps), other types of music are also creatively executed. Even overplayed radio-pop shines with the Callbacks' magic touch; from Michelle Branch and Vanessa Carlton to Maroon 5, there are no cloying, whining background vocals to distract from the stellar — I repeat, stellar — soloists appearing here.

Song For Holly, a sexy, slow, trip-hoppy piece brilliantly led by Angela Amos, is unbelievable. I'll tell you to buy this album for that track alone. Vocal percussion, bass, and the arrangement are all completely flawless, and is reminiscent of BOCA 2003's 6 Underground, but reaches an even more complex, layered level of production. This song is simply amazing and could easily be played at a dance club among the real electronica and dance music.

The smart arrangements here raise ...and three wishes above the bar that other collegiate groups have previously strived for. A Thousand Miles relies less on duplicating Vanessa Carlton's piano than on new, original syllables and lowers the piano theme interludes to the bass and tenors, a risky move that pays off by adding energy and bounce with a nice percussion to pump it up. The two Ben Folds songs are also beautiful, swelling tracks that emanate emotion and sensitivity. Although I think the percussion comes in a little too late in Air, Jill Durso's haunting alto lead holds the piece together. (It's unfortunate Durso has recently graduated; she contributed strong arrangements including Song For Holly and another solo here.)

Hold My Hand is by far the weakest song on ...and three wishes (which spoiled my first listen of the album since it's one of my favorite songs), but the Callbacks were smart to bury it in the middle of an otherwise fantastic album, and although Don't Change Your Plans is a great number, I felt like soloist Theresa House was a little too close to the mic when recording.

Despite the few other minor distractions (for example, I'm Gonna Make You Love Me seems a bit too high for the two soloists), I had a great time with this album. The Callbacks seem to understand that their a cappella strengths lie in R&B, and I would love to hear more of that in the future, as their amazing soloists can really shine through. It would even be okay to skip the pop drivel and concentrate solely on music that's more soulful. With vocals that blend seamlessly with a great big bass and percussion that isn't too overbearing, you can save your three wishes for an album that really needs the help.

...and three wishes by the Harvard Callbacks is exactly how a well miked live concert should sound.

Make no mistake, this is a studio recorded album, but the overall sound makes me feel like I am in the third row of a Harvard concert hall at one of their concerts. There are lots of lush textures used throughout "Three Wishes" that are almost completely devoid of extraneous effects. Occasionally, some guitar like ostinatos will show up in the background, but they aren't the centerpiece at any point. There were multiple people involved in the engineering side who very tactfully and subtly supported the Callbacks without distracting from their natural sound. Hopefully the Callbacks will use the new RARB feature to list all those involved.

There are no perc credits in the liner notes, but it sounds like former Callback music director and current "Vote for Pedro" drummer Ben Jackson. His sound on the album is more raw than what has become normal studio drumming in recorded a cappella these days. Part of me was screaming for some subtle overdubbed percussion or at least a separate cymbal crash, but that would have destroyed the intimate concert feel so I'm glad it was left the way it was. In any case, Jackson's drumming is strong enough to stand on its own.

Most of the arrangements lean toward the simpler side, but that doesn't make them boring. The percussive simplicity allows that lushness I talked about earlier really sink into the listener's ear. Most of the songs were consistently strong, but unfortunately the two of noticeably lower caliber bookended the album. I found myself skipping Ain't No Sunshine and 5 Steps which provided the album title; "Five steps to eternity, four steps past love and three wishes from touching the heavens above." The former was too repetitive and didn't offer anything new to the standard and the latter had far too much riffing over long sustained background parts.

Although I was never compelled to start dancing while listening I was definitely intrigued by the different direction the Callbacks chose for this album. Purists will like "Three Wishes" because of its rich live sound achieved without lots of studio duct tape. Effect-heads will like "Three Wishes" because of the intimate concert atmosphere that is often lacking in beefed up electric albums. Either way, good things.