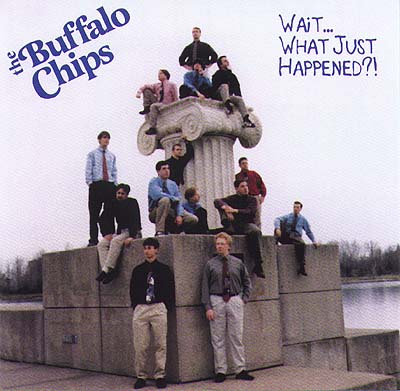 What just happened is another album of your favorite a cappella songs in your favorite a cappella format — the large group of college guys with mostly average-to-decent voices. There was exactly one song I hadn't heard done by several other a cappella groups — Cake's The Distance. It was a nice, creative arrangement, but the solo was concentrating more on shouting and less on sounding calm and inorexable, which are the qualities I enjoy in the original delivery.

Oh, wait, I take part of that back. There were two songs — I can't think that I've ever heard Brandy done before, though it certainly adapts well to the standard a cappella model. And indeed, it's a good candidate for best track on the album.

The thing about standard-guy-groups is that you usually have a bunch of baritones of different vocal colors trying to get through a repetoire that really demands tenors. Not a whole lot you can do about this, and the Chips do at least as well as most. They're a rather likable bunch and they do have some things in their favor.

I liked the group's willingness to layer rhythms and one-voice parts in little sections throughout many of the songs. In The Distance, Runaround Sue, even Me and Julio, it gives a nice break from the wall'o'sound approach and lets you know they were thinking about what they were doing. There are a few nice soloists, and I also got a kick out of the Peaches breakdown in the middle of The Joker — that Steve Miller song alwayls gets on my nerves, and their random segue was a pleasant surprise.

Overall this isn't a bad little album, but I wouldn't recommend it unless you knew people in the group, had seen them live or were just one of those people who buys everything. You've probably got something similar already.

Wait . . . What year is it? From the sound of this album it's somewhere between 1977 and 1980. With a few exceptions, the Chips' sound is strictly old school: no vocal percussion, basic arrangements, and an over-all clean sound. The only real influence of they take from most of the typical contemporary a cappella scene is energy. They sing the sort of songs I've heard on old LPs from Ivy groups, but they do it with some real spirit. It has the potential to a very refreshing throwback. Unfortunately, this album doesn't live up to it's potential.

There are some misguided arrangements or bad solos here and there, but that's not the problem. What really kills this CD are the song choices, most of which give new meaning to the word "overdone". The lack of originality is alarming. Moondance? Runaround Sue? And So it Goes? Under the Boardwalk? Could they be any more old hat? Yes, they can. They also throw in Weird Al's One More Minute (which was a bad idea for a cover long before it was overdone. You can't copy comic timing. there's a reason you can go out to hear a cover band but you can't hear a cover comedian). Topping off the unoriginal songs, you guessed it, December 1963 (Oh What a Night). These are songs that would have been okay if there were only one of them. But even a classic like Moondance sounds stale when it's surrounded by songs like those.

The Chips try to break their own mold here and there by throwing in some less obvious choices, but it doesn't help when they pick a song like The Distance. I can't recall hearing anything so stiff, tuneless, and thoroughly pointless. The only reasons I can image them trying it are to prove they can do vocal percussion (which they can do surprisingly well considering they only do it on a few songs) and to try to become more mainstream.

After I bashed them for singing songs that have been rotting away in the closet for years, you may be surprised to hear that I don't want to see them trying to be more contemporary or current in their song choices. the SPIRIT of the songs they sing is a strong match for their arranging style (back to basics) and their singing style (bright tones and high spirits). They just need to pick different songs. They should sing an oldie or two, but they shouldn't pick OVERDONE oldies. They should stick with a Billy Joel song or two, but again, find something everyone else hasn't already done. They should keep singing Crazy Little Thing Called Love at every show they do because, lets face it, it kicks butt. Other than that they, should start raiding the singer-songwriters for material, maybe even obscure material. Let's hear them sing Someday Someway by Marshall Crenshaw, or Alleluia by Dar Williams, or No Myth by Michael Penn. . . all would fit perfectly with their classic style.

Ironically, by being such a throwback, the Chips have very fresh sound. They just need to find material to match it.

Maybe it's just that I've been listening to too much east coast glee club-type music as of late, but this seems like one of those groups that in my mind next month will blend into all the others. Opening a CD with good old Good Old A Cappella/Soul to Soul may seem like a great idea in principle, but not to those folks who've heard collegiate groups do it way too many times. But it does set a tone for the CD - most of these songs are overdone and over-recorded. Too bad — they're not a bad group, but song selection shoots them in the foot. You name it — Moondance, Soul to Soul, Rubber Ducky, One More Minute, Under the Boardwalk, If I Ever Fall In Love, etc... you've heard them before, and the Chips recorded them. I could do without the squeaking-dog cuica sound in Me and Julio, where the percussion and bassline combine to give us not the fun groove I'd hoped for, but a plodding, downbeat-only thumping. The Chips should also work on their arrangements. These seem to be mainly vocal transcriptions, including every verse, chorus, guitar part, horn line, instrumental break, and nuance note for note from the original. Oh well... at least you know what you're getting. Soloist on Oh What a Night does a nice rendition, but he's backed up by tuning problems. Crazy Little Thing has a good soloist, perhaps the best on the CD. Interesting choice to use Dueling Banjos as an intro to Black Water; I'll give them the benefit of the doubt and assume that these live tracks are visually amusing. It's hard to tell, but the crowd seems to be having fun in the background. If you'd like to hear familiar renditions of familiar songs you know by heart, get this CD. If you want to hear something new and innovative, avoid it - the only thing surprising is the techno dance remix of Rubber Ducky at the end, which is a nice ending.

More than anything else, this album, by the fourteen-member all-male Buffalo Chips, sounds like a good beginning. A good selection of song styles is well-complemented by the obvious enthusiasm of the singers. Unfortunately, what is gained in energy is at times undermined by deteriorating tuning and uncertain musicality. Contributing to the last are the arrangements, which, while making use of the broad range available to men's groups, somehow seem to leave most of the voices stranded. There is a nakedness to the sound, which could be lessened by working more towards blending between the sections. This is also particularly true for the soloists, who sometimes seem to founder when they should be shining.

In all, then, Wait... What Just Happened? is somewhat ironically named. The overall impression is that of a group in its initial stages of singing, not yet used to the idea and indeed not yet used to one another. Something of a youthful verve carries many moments well (track 1 is filled to the brim with excitement). As usual, for an all-male group, the album is shot through with humor, sometimes lost on the non-studio audience (including this reviewer). It would be great to see these boys live, and to hear what they can do with recording given a bit more experience under their belts. This is far from a bad album, but needs more than a little spit and polish.

One of the first things that struck me as I was looking over the CD was how many standards there were on this album. OK, I figured, a young group, they want to do some standards they've never tried. What worried me most was that I expected them, as a young group, to lack the energy or creativity to pull them off with any interest. It was a pleasant surprise to find that those standards actually helped to shape the album into a well-ordered collection. Even the more contemporary standards (most of the originals are from the '60s and '70s) fit in beautifully with the album with the exception of The Distance. My only question is "Why?" The only answer I can come up with is archival purposes, because the track served no purpose as a part of this collection. With fourteen other tracks on here, most of which were well done, this one should've been taken off and saved for a later CD, maybe.

That major gripe being said, I really like the start and end of the album, though it dragged in the middle (tracks 4-6 and 8-10). The only real disappointment was in tracks 4-6, where the tuning and blend seemed to distinctly fall off.

I was slightly disappointed by the production of the live tracks. Although I scored four of the five tracks high, there still could have been so much more if the mics were placed closer to the group and further from the audience.

Understand one thing when you look at the scores that I give: Innovation/Creativity has almost nothing to do with the overall score for the album. You could do an arrangement directly lifted from another group, or a song that has been covered umpteen times, but if you put a lot of heart and energy into it, it will sound every bit as fresh as an updated arrangement, maybe even more so. That being said, this album falls into that groove: many of the tracks have been covered many times before, but the Chips sell most of them as their own, especially Moondance and Under the Boardwalk.

HIDDEN TRACKS (Why are there TWO?) Point #1) Why dedicate a hidden track to introductions? Point #2) Nice touch with Techno Ducky, a little levity sprinkled into barbershop is a good thing.