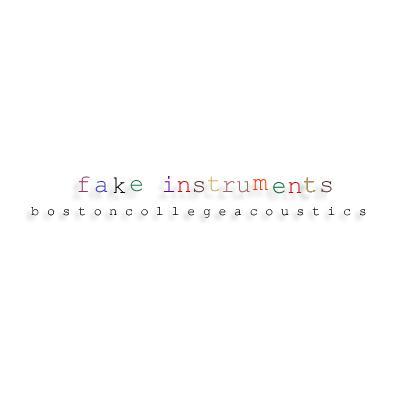 You know exactly who I'm talking about. They wear a perpetual pleasant smile, regardless of the situation. They laugh politely at jokes but seldom make any of their own. They are nicely dressed but not well-dressed, all the better to blend into the crowd. They are your classmates, your work colleagues, your friend of a friend of a friend. They are "nice" people. And boring.

This pronouncement is made all the more surprising given that the Acoustics handed Fake Instruments over to John Clark for his customary alchemy. Like most of Clark's work, Fake Instruments is a sparkling, light confection — a cappella you can take home to Mom and still dance around to. The reverb-soaked, muffled sound issues that marked Vintage Denim and Perpetual Breakfast are gone; what's left behind is a crisp, shiny mix that would make most collegiate groups proud. And yet, I found the final product somewhat lacking the charm of its predecessor.

The Acoustics tend to fare better with their upbeat numbers. Although we get none of the raw emotion that is so vital to pulling off Wild Horses or Waiting In Vain, tracks like I'm Your Baby Tonight and Hold On sync well with the Acoustics' boppy, happy sound. The men of the Acoustics seem to be almost universally bari-tenors with a warm, pleasant sound; you can easily visualize these guys in performance with furrowed brow and puppy eyes. The Acoustics' women have a bit more range, but also don't rock the boat all that much.

It's not that this album has no flashes of brilliance, just that each flash is tempered with a dash of mediocrity. Yellow suffers plodding verses with alternating "dohs" suggesting an oompah band on Vicodin, but then opens up to a stunning, soaring chorus that sweeps the listener up and away. The soloist on Time Of Our Lives is a bit too warbly to pull off Bonnie Raitt, but her smooth, earthy backup vocalists narrow the gap considerably. I've never heard a group pull off the soporific Turn Me On, but the Acoustics get points for changing it up with a doo-wop style background. Some aggressive self-editing might have helped, as the Acoustics have a penchant for singing every repeat of every chorus with little to no variation. A lot of these tracks could have lost a good 30-60 seconds and been all the better for it.

Nice guys don't always finish last, and Fake Instruments is not a bad album. But the Acoustics are capable of more than this, and with luck, all the pieces will come together the next time around.

"Progress, not perfection." That's my mantra this week, and an apt proverb to apply to the BC Acoustics' lastest release, Fake Instruments. There are some pieces that are unbelievably well-produced (I'm Your Baby Tonight, Wild Horses, Waiting In Vain) and a few that fall barely higher than average (Hear You Me, Life Is A Highway). But the majority of these tracks are exemplars of improvement over the Acoustics' last CD, Vintage Denim. And it's change like this that makes my RARB reviewing experience worthwhile.

The album gets better with each listen. Allow me to present to you impressions from each of my subsequent sittings with the album. First time around, I was in the car driving into Raleigh on the first snowy night of the season, Fake Instruments providing ambient music to the changing weather, and I nearly ran off the road by I'm Your Baby Tonight. The arrangement! The solo! The execution! This kind of song comes around once in a very long blue moon. I was absolutely blown away, and forgot about the rest of the album, putting this Steve Ryder arrangement/Elizabeth Firger solo on repeat until I got to my destination. I'd like to state for the record that I think this song deserved CARA nods in all three categories and not just for "Best Collegiate Song." Next up I fell in love with the Katie Fernandez arranged and led Wild Horses. Her low, raspy Melissa Etheridge-inspired tone is well-matched to the percussionless song, both huge and intimate at once. She emotes, wails, and propels the song forward all the while backed by the swelling, rolling accompaniment. But Christina Bronsing's solo on Waiting In Vain stole my attention away from Katie. The lovely, clear melody is backed by a pulsing In Your Eyes-esque background that swells to a loud, roaring apex without destroying the ambience of the song.

And that was just the first go-round. Back at home, I discovered Leaving Town, a fun and unpretentious song with a slick arrangement and just enough complexity to keep it interesting. Unlike other recent versions of Yellow, this one leans more to the pop side, which I could take or leave. Grey Street is a fine track, although the signature three chord progression in Every. Single. Measure. gets repetitive and quickly loses interest. And while the lyrics of When You Say Nothing At All are rather cheesy ("It's amazing how you can speak right to my heart" ... gag me), this simple, sweet arrangement fronted by Philip Abraham won my heart. Throughout the album, songs use sopranos to their full advantage: there are no screeching voices that steal attention from the middle voices. Instead, they blend perfectly like back-up singers with a professional vocalist. Closing out the disc with Hold On is an interesting choice. I'm not thrilled with the song to begin with, but it's a pretty good arrangement by Melesa Johnston with some fun, appropriately used electric guitar (fake, of course) making this version the best of the Hold Ons I've encountered.

I'm convinced that if the best songs on this album hadn't appeared on previous BOCA CDs, one of them would have certain been heard on the 2006 edition. Each song is nuanced with individuality. It may not be the magnum opus of this BC group, but Fake Instruments is full of high points. Full of spit and polish and leaps and bounds over Vintage Denim, this will be a tough act to follow, although not impossible. Nevertheless, the performances on the standout tracks will quick melt away any memories of the inferior pieces. A fantastic accomplishment in all aspects of a cappella.

You know how some albums have tons of energy but awful execution? Where the singers are so excited to be in the studio that they put all their emotion into the singing and forget completely about tuning and blend? Well, this isn't one of those at all.

Instead, Fake Instruments has jumped to the opposite side of the spectrum — it actually seems like the Acoustics went out of their way to sap their album of all possible excitement and energy. All the parts are there — song selection that fits the group, excellent soloists, and an elite producer — to place Fake Instruments among the best albums I've ever heard ... but it just falls flat.

Even at first listen, the arrangements stand out for their unoriginality. "Doh"s and "bah"s abound, and the arrangers sprinkle "neer" guitars and "bum" arpeggios liberally throughout. Aside from the syllable selection, the majority of songs fall victim to one of the biggest co-ed a cappella traps — setting the voices in their most comfortable ranges. This allows the singers to slack off and automatically lowers their energy level.

Another trap ensnared the Acoustics' arrangers multiple times in the album: I had no problem envisioning the repeat signs in their music. I was particularly annoyed with this, because after one verse/chorus, there's almost never anything new. Even on a smaller scale, the repetition gets redundant; it seems as though every single song has two-bar phrases that just get sung over and over and over again.

An even larger portion of the fault comes from the postproduction, however. Somewhere along the line, the group decided that the closer a part gets to middle C, the louder it should be. So in, say, 10 of the 14 tracks, the middle range is a mush, the dull syllables get amplified, and the solos get muddled. (The latter is particularly true in Life Is A Highway, which is sad because Billy Hurley sang his heart out on it, and deserves to be heard.)

The converse to this is that the high soprano parts are usually buried in the mix. In I'm Your Baby Tonight, for instance, the sopranos sing a stunningly perfect, high arpeggio ... but you can only hear it if you strain yourself. In Waiting In Vain, there's an incredible, rocking trumpet part that comes in during the choruses ... but again, it's not nearly as loud as it should be. These are the parts that could bring tons of energy, and burying them denies that.

I realize I'm coming off as a bit picky — the album on the whole sounds great, and the majority of the production is spot on. I'm Your Baby Tonight, When You Say Nothing At All, and Hold On are all excellent, and will probably end up in my iPod once I finish this review. The rest of the songs are not excellent, however, and made Fake Instruments one of the lowest energy albums in memory.