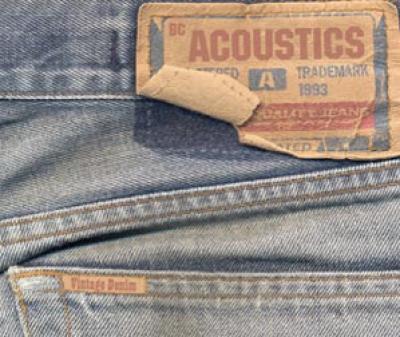 I was worried when I received Vintage Denim That the Acoustics would paper the album with current artists like John Mayer, Evanescence, and Avril Lavigne. Thankfully, the album holds true to its name and offers some very solid covers of a handful of yesterday's favorite artists.

Before you have a chance to settle in and listen to this album, you get introduced to the gritty yet stylish Katie Fernandez. Katie rocks out on Piece of My Heart, capturing the song and the spirit of the group. Greatness assists greatness on this one with Conor Mulcahy providing the arrangement that lets Katie shine. Conor provides three other arrangements on the album that are leagues above the rest. I especially enjoyed his arrangement of Here Comes the Rain Again, but I'm puzzled as to why he chose "shoo wop" as the alto syllable in the chorus. It seemed a little cheesy to me.

This is a very large group. I count 21 members in the picture from the liner notes. There were times when listening to this album that I felt like it was at least double that. I don't know that there is a right and wrong to group size in collegiate a cappella, but I think that the size might contribute to some of The Acoustics' intonation slips. I'd encourage them (if they aren't doing this already) to make sure that there are an odd number of people on doubled parts for tuning purposes. Three people can tune together singing the same line better than two. Trust me, it works.

I wish that the weaker tracks weren't all hidden together in the middle of the album (Smoke, Who I Am, Cathedrals). This creates a very uneven feel to the album, and in my opinion leaves the last three tracks hung out to dry. I felt like I could listen to this album through Here Comes the Rain Again and then I'd be done. If these tracks were positioned better, it may keep the listener from skipping tracks, and maybe something would catch their ear in the other, weaker tracks.

One thought on production: the soloists were mixed at different levels. Some were perfect and others were too far back. Try to achieve consistency in levels across the project. I also felt the bass presence would come and go with each song. Again, try to be consistent with your produced sound.

This is an album that I enjoyed more the more I listened to it. The first seven tracks are solid and the rest aren't awful. Unfortunately, this isn't an album that I would recommend as a new, creative sound that everyone should buy. It's just a solid album that fans of the group are sure to love.

The phrase Vintage Denim conjures up an image of the coolest jeans you've ever owned, style so good it manages to last through the decades and sell for hundreds in consignment shops. The latest album from The BC Acoustics doesn't quite reach that bar. While the overall album is quite solid, none of the tracks quite make the leap to true greatness. Nonetheless, these singers have put out a wholly listenable effort, if not one that will remain in my CD player for repeat rotations.

The Acoustics do display a real talent for capturing the spirit of the original song, particularly on some of the moodier tracks. I was particularly impressed by Here Comes the Rain Again and Smoke, the latter achieving real pathos through heartfelt singing by both soloist and background. It was also nice to see the group selecting some relatively unconventional repertoire choices; for every Dreams and Fallin', there was a Smoke or Cathedrals to balance it out.

Arrangements here run the gamut from a wonderfully textured treatment of The Eurhythmics' Here Comes the Rain Again to an unbearably cheesy rendition of Piece of My Heart (which is made bearable only by Katie Fernandez's rockout solo). Generally, The Acoustics' soloists are strong across the board (the album showcases 12 different singers!), although the women tend to blur together after awhile. The Acoustics are clearly capable musicians and singers.

However, Vintage Denim also seems to suffer from the same problems as The Acoustics' last album, Perpetual Breakfast. A previous reviewer remarked on the reverb-heavy, unfocused mix of that CD. Already strong tracks like Rebecca could be improved if the interesting background parts and harmonies weren't somewhat muddied by production. Conversely, there were a few points where better mixing of the soprano lines and basses would have prevented them from sticking out of the mix so awkwardly. Most of the songs here have some nice moments; it's unfortunate that a number of tuning and production missteps end up negating the highs of the disc (e.g., the bright, joyful air of Who I Am vs. serious tuning issues on the song's harmonies). Greater attention to detail might have helped the album capture a bit of the magic that separates merely solid performances from great ones.

Not quite vintage — more like your favorite jeans from the GAP. Comfortable, dependable, but ultimately not the most interesting piece in your wardrobe.

College groups in Boston are, for the most part, a dime a dozen. I never saw the BC Acoustics when I lived in the area, probably because my own university had nearly 10 a cappella groups itself. But now that I'm three years out of school and nearly 800 miles away, Vintage Denim brings me back to the good old days of Boston collegiate a cappella. Sparse arrangements, mediocre soloists, and a good mix of songs. It's not an excellent album by today's RARB standards, but that doesn't mean I didn't enjoy it.

Compare Vintage Denim to the array of superb college albums out there and you'll be disappointed. On its own, however, it's got some features worth mentioning. The production is straight-up. You won't hear any revved-up bass or auto-tune (that's evident in some off-kilter chords), and for me, that's a bonus; I've never heard an album out of the Boston area that sounded like something Off the Beat produced in Philly. There's high energy all around and some decent vocal percussion that moves the songs along. The arrangements are fine, with great use of Beethoven's Moonlight Sonata as an intro to the a cappella-abused Fallin'. Here, however, Christina Bronsing's solo redeems the piece as a song that still deserves to be covered by women who can do Alicia Keys justice.

The musicianship of The Acoustics often leaves something to be desired, but I kind of like that, again because it brings me back to the a cappella I remember as a college student: simple vocals in the back that closely match the instrumentation in the original plus leads that wail on the power songs. When I first started listening to Vintage Denim, I had the first two tracks on repeat. Katie Fernandez's solo on Piece of My Heart is absolutely killer, attacking the music with a raspy, sexy, solid voice that I find mezmerizing. I also loved Minkyu Kim on Rebecca: a sweet and unapologetic tenor with a good ear for the melody. There are some poor choices in solos on Everywhere and Come Undone (to name a few), where the leads are near the top of their ranges on some notes and come off weakly. Later solos come off as too nasal and untrained. There's a nice amount of old school syllables here, with plenty of "jang jangs" and "doh doh dohs" to go around.

Still, I find a certain familiarity with this album. Arrangements and production values are five years behind the groups in today's college a cappella forefront, which justifies my scoring. Vintage Denim is the a cappella I wanted to sing when I was in undergrad, the kind I proudly played to classmates in graduate school. The album's title gives a wonderful verbal description of how I feel about the music contained on it: laid-back, worn-in, and comfortable. Maybe it doesn't set any trends, but it's something to come back to time and time again.

For current ordering information, contact the group by email at acoustics@bc.edu or visit their web site.