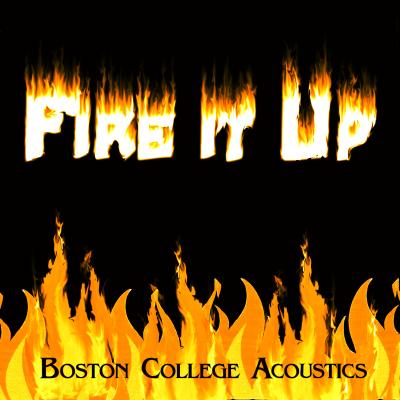 The Boston College Acoustics' Fire It Up is a highly listenable yearbook. There're some acoustic sounds, some electronic sounds; some smooth arrangements and some wacky syllables; some good leads, some a little less so. The album is not so much an artistic statement as a collection of songs they like to sing. This is a memento for the fans, friends, and families. And at this limited task, it's excellent, capturing enough of the live feel to not seem like a completely different group while using just enough studio tricks so that the album isn't as empty as voices can sound when exposed. For the uninitiated, this just isn't a must-have.

One compelling aspect of the Acoustics is their focus on having leads create the mood of the songs. They start with their strongest: Looking at the World from the Bottom of a Well. It's a great opener. Upbeat, interestingly arranged, and tightly produced with a terrific lead and a wall of sound chorus; it's tough to ask for too much more. The little itch: the syllable choices ride a fine line between creative and goofy, but killer energy makes that worth overlooking.

Following closely, Heart of the Matter is probably the standout lead of this coed ensemble. The simple octaves that open the song are a powerful statement, but the arrangement misses the wall of sound and instead gets too busy as the piece goes on (by about minute 2). Further, while the lead is emotionally moving and deftly acrobatic, the vocal percussion leaves a great deal to be desired.

The VP issue isn't universal but it is prevalent, with performances ranging from sleepy and repetitive (Keep Me Hanging On, Crazy Love) to kind of busy (Super Duper Love). But then, just to foil any negative blanket statements, there's Lifetime which sounds as slick and tight as any real 808 drum machine. Even on Universe & U the sound is at least crisp, which is more than can be said for some other tracks.

Other issues: Autotune artifacts/lead vocal effects plagues a few of the tracks (Gone); lame instrumental imitations plague others (Black Velvet). Little distractions like these and some less than compelling leads are enough to pull scores down a notch.

But overall, this is an album that will please fans and won't embarrass the group 20 years down the line at their reunion. That's an achievement to be proud of, and John Clark's production sparkle can take some of that credit.

The next level for the Acoustics is to make a true artistic statement, to make a cohesive sound and to show off the Acoustics solid leads in a bold, inventive sonic landscape. These guys certainly have the potential if they have the will to do the deed.

In a world with flat screens, auto water features, and ProTools, it can be easy to assume fancier is better. Yet sometimes simplicity can be the answer. Case in point: Fire It Up, the latest album from the Boston College Acoustics. The Acoustics prove that good singing beats fancy arrangements any day.

To say the arrangements on Fire It Up are traditional would be putting it mildly. "Doo" and "dum", "la" and "ooo" make up the bulk of the album. Arrangements tend to be sparse, often with just two or three parts singings at a time. Percussion, and not arranging, drives most of the tempo. The Acoustics choose block where some might choose counterpoint; they choose a few voices where another group might have a cacophony.

Yet Fire It Up is an example of sweet simplicity. The Acoustics can flat-out sing. Precise, blended, together, well-tuned. The singers treat each note like it's the most important part of the album, but still manage a unified texture and sonic signature. There's some definite studio gloss, but the block still exudes vitality. If anything, I would have liked some more rawness on the mixing. The singers sound at ease, and it makes for an enjoyable listen.

The Acoustics also have phenomenal soloists. Someone better offer Clare Swanson a record contract ASAP. She steals the show, sounding almost effortlessly voluptuous on Ex-Factor and Heart of the Matter. The latter is one of the best collegiate solos I've ever heard. Yet Swanson's skill is only the beginning: the depth of solo talent the Acoustics have is astounding.

Usually I can only muster a handful of listens before I've had enough of a collegiate album. Fire It Up was the exact opposite. At first the mostly mid-tempo album left me feeling bored and unimpressed. But with each successive listen, I find something more to like. Instead of flaunting or overwhelming, Fire It Up builds steady waves that eventually sweep the listener away.

The Boston College Acoustics' Fire It Up is, in most ways, the definition of "standard" within the current world of collegiate a cappella recordings. Don't get me wrong — this isn't necessarily a bad thing at all; if anything, it's a safe, reliable bet for those who like to rock out to the typical college group. This also means that there isn't anything avant-garde or mind-blowing to be found, but then again, that might not have been the Acoustics' goal when putting this album together.

To me, the most noteable aspect of Fire It Up is its arrangements. Some are really cool — like the guitar/rhythm section towards the end of Black Velvet. Good stuff. Some are pretty lame/boring, specifically those for Keep Me Hanging On and Ex-Factor, which features too many flatlined "oohs" and "ahhs". These kinds of arrangements are easy to learn and easy to sing, but they are among the most difficult to effectively execute. The Acoustics might want to address phrasing a bit more on long notes. Dynamic constrast and intensity are key with bare charts.

Another note about the arrangements. Many of the songs feature very exposed soprano descants. On this particular album, they are sometimes executed beautifully (and when they are, it REALLY adds to the experience!) but occasionally the entrances are shaky, out of tune, or breathy. That's mostly because these types of entrances are VERY difficult to pull off. Kudos to the arrangers for having faith in your soprano section. Spend a bit more time on these areas in rehearsal; the whole song will benefit from it.

As I said, overall, we net out at about average. Soloists range from very engaging — Rich Constant really grooves on Crazy Love — to pushy, shouty, or pop-affected. Energy is pretty strong, but some may feel that there are too many slow or downtempo songs on the set list, which kind of deflates the album's momentum. Tuning is consistent enough, with occasional intonation issues from the sopranos (see earlier paragraph) and periodic troubles with chords locking. That's okay, though, because a wrong note here or there reminds you that these guys are human, and that they are also human when they have very engaging moments!

Overall, these guys and gals aren't pushing any envelopes, but they do show enthusiasm and promise. Songs like Black Velvet, I'm Outta Love, and Crazy Love confirm that there are sparks of greatness to be found. Once they figure out how to better isolate and utilize these strengths, I trust the Acoustics will start turning some heads.