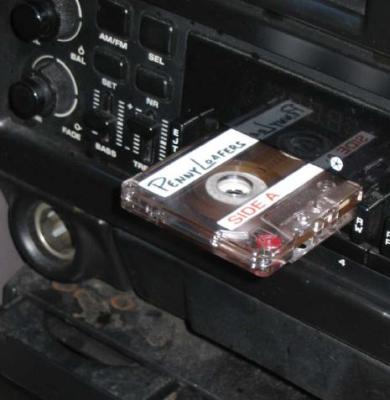 At its best, Side A has an engaging and distinctive sound. Sexy solos float over growly background vocals that make up in energy what they lack in precision. Unfortunately, about half the album sounds more like "Side B", where the tuning falls apart and the soloists sound like they're working from a different set of pitches.

Try is my favorite track. Neha Sachdev does a great job on the lead, and the whole song comes together. Take Me Away is almost as good, this time led by the lovely voice of Erin Sale. Some of the other successful tracks are more earthy. Take Me Out is fun and a little punk, while Boulevard of Broken Dreams goes off like a shotgun at the front of the album. Panache goes a long way — in Worn Me Down, for example, the soloist makes up for an unpolished voice with a Chrissie Hynde-style delivery that caught my attention.

But Mystery shows that this group can't hold it together for a whole album. The tuning starts out bad and gets worse, when the soloist comes in seemingly from a different planet. Don't Leave Home suffers from some of the same difficulties but isn't quite such a mess. Also, the soloist gets points for adding a little edge to the "you won't leave" lines, which sound downright creepy thanks to her competent handling. As the disk heads into Warning Signs down the stretch, the background tuning gets worse, almost as if they ran out of rehearsal time and production money at the same time. Another White Day uses a light female solo to pull back some equilibrium. But then 12:51 goes so punk (read: sloppy and all over the place) it's hard to sit through, and . At least White Houses has better production values and a kicky solo to send us off in a good mood.

If they were my friends, I'd be proud of the Penny Loafers for this album. But I wouldn't buy it.

I'm tired of saying it; I'm sure groups are tired of hearing it, and yet, it is inevitable. When you are one of the oldest co-ed groups at a powerhouse university of a cappella music like the University of Pennsylvania, there are certain expectations and comparisons that are mandated. And far be it from me to neglect a mandate. It would be too much tribulation.

The Penny Loafers are not Off the Beat. And no matter what tricks they try to pull out of their toolbox, it doesn't seem like they'll ever be as good as they were when they made BOCA '99.

On the surface, that is a good thing. Every group should have their own identity and sound, something that floats them above the sea of sameness out there. And the Loafers try to establish that, but Side A basically sounds like a poor derivative of their "younger" sibling. The Penny Loafers and Off the Beat were both founded in 1986, though specific founding dates are hard to gauge. So yeah, this is another review about how a group is not OTB.

The track list boasts some bombs, but it's all smoke and mirrors. The arrangements are sometimes playful, sometimes brooding, and oftimes baffling. Try is the only song that completely gels. Others strive for it, but just fall short of being great. Lots of "zhao-din-jos" keeps the songs on this side of the cool and hip alternative vein. But the balance and tuning problems cause me more screaming and a flailing of my hands about my head and shoulders.

I would play the album and then I'd think, "No, static would be better than listening to this again". Chords stack wrong, soloists stretch for notes they don't have and the "dah" syllable doesn't blend. How in the world do you not blend a "dah"? And if you hear that you can't blend that syllable for the love of Pete, don't arrange an otherwise passable song and ruin it with the painful screeching. Take one song for example: Warning Signs would have been a great track for the group if the tuning on the "dahs" was fixed.

The drumming is often elementary, though it is enhanced through production techniques, sometimes emphasizing the downbeat and sometimes falling just off the beat such that it distracts and distorts the tempos.

There really isn't much more to say that wouldn't require me to repeat myself. Musicianship has to be of utmost importance when you are recording an album — tuning, phrasing, blend, dynamics, balance and some creativity. But definitely, they need to think again about the language they use in hidden tracks; Kermit would not be amused. Those are all things that I want The Penny Loafers to work on when mama's not around.

Side A is rhythmically driven to a fault. The Penny Loafers consistently use a one or two measure phrase of compounded simple rhythms that sometimes line up awkwardly and repeat with very little variation for the entire song. The result is often the background accompaniment turning into a form of harmonic white noise that can easily be tuned out, leaving only the drums and soloist for the listener to focus on. Thankfully, the soloists are pretty decent throughout the album, which makes me wonder why there is such a disconnect between the quality of lead singers and background singers. Aren't they the same people? The other side effect of this mystery is that choruses typically occur with little rhythmic or dynamic change from the verse. Whether this is an attempt to mimic the originals exactly or to put the Penny Loafers' stamp on the arrangement, I don't know. It's sort of both and neither at the same time, which is the source of ambivalence.

The slick studio production comes to the rescue quite often with skillful additions to the atmosphere and mood of each piece. So much so, in fact, that it feels like the mixing board is another member of the group and not just part of the process of recording.

All in all, there are some really good aspects of Side A: the energy is always appropriate to the song, the repertoire is varied and interesting without seeming overdone, and the album art concept is pretty cool.

Now ... WHAT WERE YOU THINKING?!? The last 50 seconds are a secret track that consist of someone singing Rainbow Connection like Kermit while someone repeats f***er over and over again. Now, I'm no prude. I love George Carlin and laughed at the secret track on Karaoke Bar Brawl but this had no plot, no punch line and no purpose. Recording in a studio for a long time can make crazy things seem like a good idea but whoever thought that it would be a good idea to release this little nugget needs to be smacked for subjecting this group and this album to now a severely tarnished legacy. Despite its strengths, I want nothing more to do with this album. I can't wait to hear a rebuttal from the Loafers defending this decision.