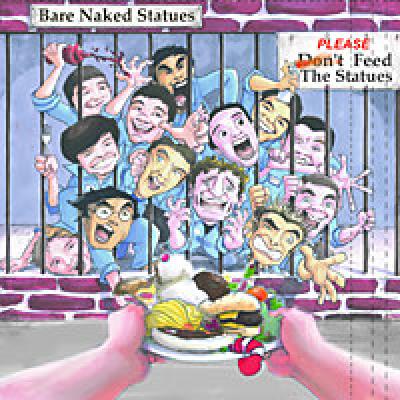 Bare Naked Statues have been involved in a true labor of love. Five hours a week since December.

Nope. Try December of 2003. (It's April 2006 as of this writing.) You have to be impressed with that kind of dedication. Although you also have to feel bad for any seniors who had to wait three years to see the fruits of their labors. One imagines them old, gray and toothless, using walkers to attend the CD release with tears in their eyes. The promised land.

Please, Don't Feed the Statues, despite its long gestation, is for the most part a simple yearbook album. Three years produced a good group but only an OK product, walking the line between low average and low good. Not a head-turning release in the world of collegiate or contemporary a cappella, solid blend and intonation and warm leads ensure that family and fans of the group are sure to enjoy Please. Poor VP, occasional mismatches between song and singer and dark, reverby production ensure that RARB scores generally stay out of the 4s and 5s.

Overall, I liked the intimate mic technique on Insomniac, Numb and Your Body is a Wonderland. The leads are lyrical to the last and carry confessional deliveries far better than dramatic declaratives. Rocking out is not this group's strong suit. Mellow challenges are better met by the Statues.

The arrangements have the virtue of simplicity and they are all sung in tune with a heady blend. For those bemoaning the artificiality of today's super-productions, fear not; the Statues deliver an extremely natural and resonant sound.

Though a few of the song choices aren't tired a cappella classics, the ones that are are mercilessly beat to an inch of their lives. Insomniac, Your Body is a Wonderland and Jesse's Girl get rolled eyes and a disappointed shake of the head. The Longest Time gets a finger down the throat and a sad hacking sound, even when it's as blendiforous and tightly rehearsed as this one.

Can someone start a blacklist? Black's the wrong color. How about an orange list? I like that better. Orange is for caution. As in: caution, don't record or perform this song unless you can offer something really special. A new, exciting arrangement. A perfectly cast lead. Something.

Some song choices favor the soloists' calm, lyric strengths, but there are uncomfortable exceptions. As a general rule, if your soloist can't do the high note — particularly of a chorus — without difficulty, forget politics: change the key, the song, the soloist or the arrangement. Seniority be damned.

It bears repeating: intonation, blend and warmth from ensemble to soloists are the vanguard of the Statues. Step up the VP, turn down the reverb, choose fresh songs you can sing the hell out of and don't make us wait another three years!

You've got to be kidding me. Insomniac? Come on, guys. Opening your "opus" with the "Virginia Gentelmen"'s [sic] classic and butchering the tones to boot? I guess it takes either balls or naivete to pull such a gutsy move. The Bare Naked Statues have put out a dull, humdrum album. Which is a bit of a shame, because it appears as though this album was over 3 years in the making. But with a repertoire that calls upon mostly overdone '90s covers, I can't help but wonder why these St. Louis University boys haven't picked up a single clue from their Washington University colleagues across the city.

From the creepy Barry White bass talk-over in Your Body is a Wonderland to the unappealing nasal, sharp solos in just about every song to the lead who cracks on the high notes in the refrain of Jesse's Girl, the whole album is a disaster. Arrangements are too square, too predictable, and oh yes, you've heard them all before. I hate to say that the time and money spent in the studio would better have been spent on vocal and arranging lessons. Oh, and what's up with the "Hey, girl you're so fine, you're so fine you blow my mind, hey Jesse's girl! Hey, Jesse's girl!" Really, on what planet is that a good idea?

The rest of the album is as eerily off kilter as the first four songs. I found myself constantly trying to either stay awake or ignore the unintentional dissonance in sharps and flats throughout the disc. Another difficulty in listening to the album is that often the soloist's mic is faded in such a way that the background vocal is actually louder than the frontman's. This is particularly evident in Beauty of Gray and Grace is Gone. Clocks brings a soloist more whiny and unintelligible than Bob Dylan. And then there's the double whammy of doing The Longest Time and doing it live.

Whether you love or hate this album will probably depend upon your tolerance for mediocrity in what's achieved excellence elsewhere. It's not only gratingly annoying, it's rather heartbreaking to know the guys take so much pride in something the a cappella community (or at least this reviewer) will undoubtedly pan.

"Every a cappella group must, at some point, contend with the trade-off of blend vs. energy. It's tough to stay in tune if your part bounces around all over the place, but it's hard to infuse your music with energy if you're singing "ooh" for an entire song. This is not to say it's impossible to overcome this problem — there are many groups that have. It's just that [the Bare Naked Statues] isn't one of them."

"It actually seems like the [Statues] went out of their way to sap their album of all possible excitement and energy...the majority of songs fall victim to one of the biggest a cappella traps — setting the voices in their most comfortable ranges. This allows the singers to slack off, and automatically lowers their energy level."

The album contains "[six] songs so overdone I couldn't believe I saw them [all] in the track list. Maybe they'd work as a medley, but no. We get all [six] songs, all the way through." And not only did they repeat songs we've heard dozens of times before, but "another trap ensnared the [Statues]' arrangers multiple times in the album as well: I had no problem envisioning the repeat signs in their music. I was particularly annoyed with this, because after one verse/chorus, there's almost never anything new. Even on a smaller scale, the repetition gets redundant." "All the songs, it seems, repeat either a short motif throughout or repeat the chorus five times too many or just basically repeat the whole freaking melody over and over again. Once the arrangers learn to make cuts or to make each verse sound different from the last, it'll help. Repetition works in instrumentals because we don't listen to the backgrounds, but in a cappella we DO — that's the whole point." I need to pause for a moment on Your Body Is A Wonderland, where this is especially true.

"The group could be a little tighter — the blend would improve if the guys sang with more breath support. And that would help fix the tuning, which was off a bit throughout but only glaringly bad on a few occasions." "The solos, for the most part, fail in the same way. Soloists seem so preoccupied with ... blend that they forget to emote any of the songs' sentiments. Songs like [Numb] and [Grace Is Gone] lose a lot of flow and structure due to the soloists' overriding efforts to blend and tune."

"Despite all this, there are some promising spots. The vocal percussion is, on some songs, above average and interesting. If the mixer had mixed it at all, it could really be a highlight. Some of the soloists, especially [Ben Kinnear] and [Rob Turner], have loads of vocal talent. But this doesn't raise the album past the [unoriginality] of the mix, the lackluster energy, the dismal tuning, and the poor song choice."

"And I guess that's my view of the album — it is what it is. It's not terribly well-planned, not terribly well-executed," but a valiant effort for a debut album. "Buy the album if you have a vested interest in [the Bare Naked Statues]. If you don't care..., you'll probably want to stay away."

There's hope for next time, though. If the Statues trash some of the ridiculous reverb, have a little more fun, and work a little more in post-production, they might just have a winner. Oh yeah, and they should be a little more original.