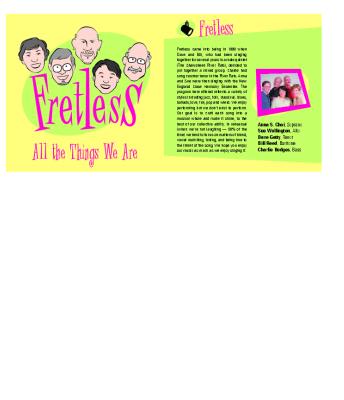 You may recognize the overused catch-phrase, "This isn't your parents' a cappella group". This does not apply here. Fretless is, in fact, your parents' a cappella group. The members of this mixed quartet maintain the traditions of yesteryear's glee clubs. This is a group that likes dissonant harmonies, free vibrato and lots of variety. From Swingle-style jazz (All The Things You Are) to mellow adult contemporary (I Can't Make You Love Me) to tried and true classical choral works (Exultate Deo, Ubi Caritas), Fretless dives in with enthusiasm and a smile. Edgy and rockin', they are not. Rehearsed and willing to face challenging material head on, they definitely are.

Fretless seems most in their element with their classical selections. It's not just that these pieces call on their strengths; it's also that Fretless seems to rise to the challenge, becoming better at fundamentals.

I'd bet that if you asked Fretless their favorite material, they'd pick the gentle swing stuff. But while the harmonic hurdles of the parts themselves are well met, that rhythmic pocket that makes jazz really come alive is missing. And while some dense chords are delivered with the straight tone that allows the chord their proper sonority, other chords simply have too much vibrato or too spotty a blend to reach that level of lushness.

Fretless faces their biggest challenge in the pop rock realm. Even with considerable rehearsal and some gutsy leads, it's a tough sell. This genre's demands of tone color, vibrato, and overall "feel" aren't met. When attempted, the sound retains a lot of the qualities that make the classical material sound as good as it does. But that makes for an uncomfortable mix.

Fretless' intonation is generally good, but there are a few serious clunkers. While normal in a cappella concerts, noticeable intonation errors are pretty rare on recordings these days. That's a result of intonation correction software, like autotune, which Fretless appears not to use. So while Fretless may intonate better than average, they don't intonate better than the average recording. Blend and vibrato range from excellent to weak, often in the same song. Energy is always good though it sometimes comes across as presentational, showy and not as a focus on the mood of the songs.

Fans of contemporary a cappella will recognize that the production techniques, timbral and syllabic evolution and other stylings of the last 30 years are largely ignored on All The Things We Are. But 18 tracks is a lot of bang for the buck, so fans of Fretless have much to look forward to.

All The Things We Are, the debut album from the Boston quartet Fretless, is 18 exhausting tracks of differing styles and genres that collectively comprise no obvious theme. The first five tracks go from jazz to oldies to adult contemporary to Latin to classical. Carry this through 18 songs, and it's just too much for a listener to handle.

The biggest problem Fretless faces on All The Things We Are is that they try to master too many genres. This may work well live, and certainly allows the group to tailor their performances to the audience or setting, but it doesn't work on the album. Fretless should pick one or two styles of a cappella, and carve themselves a niche in the expansive New England a cappella scene.

Based on what can be found herein, Fretless' best performance comes in the form of jazz and classical. Buried in the middle of the album, the best track is Some Like It Hot. For the first time on the album, the group finally sounds as if they are having some fun. After many odd chords that don't lock in the first 10 songs, the five ladies and gentlemen of Fretless finally find their groove and form some pretty nice harmonies.

Also enjoyable is Brahms' Lullaby. Again, the group locks in some nice chords when the entire group is singing the lyrics, or when they're sitting on nice "oooh's" and "aaah's." It's when they break into separate parts such as a moving bass line, background "do do do" parts, or someone imitating a guitar, that they falter (Your Mama Don't Dance, Tracks of My Tears, Lady Marmalade).

Fretless is still relatively young (they formed in 1999), and cannot be faulted too much on their freshman recording. But if they decide to make a second go at it, may I recommend fewer tracks and more emphasis on jazz and classical pieces. Leave the pop and contemporary songs to your live shows.

The cute cartoon faces of Fretless members on the cover of All The Things We Are makes it hard to be honest, to tell these five earnest singers that mainstream America isn't ready for such a release. It's especially hard, because All The Things We Are is reminiscent of a kooky Thanksgiving singalong.

You know what I'm talking about. After the turkey, pie, and ... plum brandy ... everyone shifts on over to the family room. The kids start fighting over video games, the dog is digging in the trash, and Aunt Sandy pulls out the Big Book of Piano Songs. Everyone claps and gathers around Uncle Hank, the resident family musician, who is taking his spot at the piano. Uncle Hank starts with an old favorite, All The Things You Are, but everyone is still finding chairs and coasters, so it's nothing spectacular. Your Mama Don't Dance could have been a hit if the tryptophan and carb-overdose wasn't taking over, but as it stands, the number drags considerably. Uncle Hank tries to jazz it up by going back and forth between half-time and a tempo, but this just makes the situation worse.

I Can't Make You Love Me is pretty decent. The fathers become rather nostalgic, you see, and genuine emotion swirls in the chords. Uncle Hank takes out a hymnal, and everyone perks up for Exultate Deo. The aunts clearly have a background in classical music, and thus the song is strong. The same holds true for the rest of the classical numbers the family sings later. But, Brahms' Lullaby probably wasn't Uncle Hank's best choice of song, given his family's tendency to lag when opening to vowels. The hit of the night comes in the form of Tracks of My Tears, when the aunts really let their hair down and the fam rocks-out as much as they're capable of rocking-out. But by the end of the night, judgment has lapsed, the kids are definitely up past their bedtime, and Uncle Hank thinks Lady Marmalade is an appropriate closer. Oh, that Uncle Hank!

And that's pretty much All The Things You Are, totally reminiscent of a Thanksgiving singalong. Minus the piano, of course. And probably the plum brandy. But we can't be sure about the plum brandy, because Lonesome Road and Cry Me A River are sung in the reverse order presented on the jewel case. So yeah, Uncle Hank led the gang through a slew of random songs, with some tuning issues, and a lot of blending problems. But Thanksgiving singalongs are really fun. I just wouldn't want them to leave the family room.