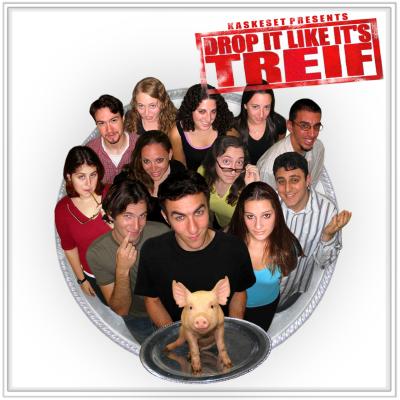 At its best, Kaskeset's new album is catchy world beat, shiny and accessible with a decent groove. Everywhere else, it sounds more like a bunch of smart Jewish kids playing with their computer. Not that that's so bad, but it's maybe less attractive to an external audience.

There are a lot of computers on this disk, as if Cher's Believe was the production model. Nothing subtle about it — the tuning ranges from good to artificially flawless, the Boheimishe Rhapsody guitar solo sounds like an electronic kazoo, and the percussion crashes throughout with a satisfying reverb. On the good tracks, it comes through as part of the Kaskeset sound. On the less good songs, well, I shrug and give them an E for effort. The technology allows a level of precision that was simply unattainable in the '80s, and it takes a lot of care and practice. But it doesn't grab me in the same way as excellent art and excellent singing.

First, the good stuff. Bo'i Kallah is the best of the bunch, with a catchy solo and mixing by Tat Tong. The song is smooth, polished and appealing, even if you have no idea what it's about. (If you don't, as I do not, the idea of an attractive-sounding young woman singing a song with a translated title of "Come, My Bride" may strike you as odd, but whatever.) The next song, Anachnu M'vorachim, has a less excellent solo but is so damn catchy I felt it deserved high praise. Darkeinu, the third song in my 5-rated triumverate, gets better as it goes, culminating in a great vocal bridge at the end. When the rhythm section drops out, it's a gloriously dramatic new texture. You know, the kind of thing most people call "a cappella" that attracted us to vocal music in the first place.

Most of the rest of the album is good company for these top tracks. Many songs have some fantastic moments (the technology can't have hurt) but also don't feel as cohesive or together as the best songs. And when the album veers stereotypical, the quality sinks. Mitachat Lashamayim had a particularly cartoon-like baritone solo, like a rabbi tap-dancing in from the wings. The women also sounded very, well, Jewish (tense-throated, often kid-like, uniformly dusky) in a way that jumped out from time to time. In general, the Hebrew theme wasn't much of an issue (well, other than my not understanding more than a few words in the lyrics). But the group could get a little schmaltzy. For example, the rewritten Queen lyrics felt more like a Yiddish crossover vocabulary list than a rock opera narrative.

I'll close with a few more highlights. I liked the female lead at the end of City of Gold and in the first chunk of the Boy Band Medley, and the very sincere Birthright was written by a group alumnus. The song is a great change of pace from the rock tune that went before it. As for other tracks, Asher Baba has great energy, but it's too Bon Jovi-esque to win my heart.

Overall, this is a very solid effort with some very different repertoire than the usual college rock cover mix. If you're interested in hearing what's out there, you could do a lot worse.

With their third CD release, Drop It Like It's Treif, Kaskeset has come a long way — more than anything, thanks to modern recording technology and the personnel who know how to use it.

Recorded by well-known a cappella and Jewish music talent Mike Boxer (a former member of the group), edited by Boxer and Ed Boyer, and mixed almost exclusively by Boxer, every track has a polished sound that owes a fair amount of debt to auto-tune, sampling, octavizing and most of the other typical tricks of the trade.

The result is an album that is light years ahead of the group's previous two, and likely a pretty satisfying listen for most casual listeners (though I wonder how big the market is for Jewish a cappella among casual a cappella listeners in general). Gone are the very noticeable tuning issues of CDs past. Gone are the oft-poor voicings. Gone, but for a few small exceptions, is the lack of energy. Gone is inferior production value. Present is a pounding, heavily produced bass and VP sound that dominates most of the tracks, with the VP sampled to the point of super-humanness (if that bothers you, you'll be bothered; if not, not; for me, it occasionally got on my nerves).

All of which leads me to this CD's greatest weakness, something that seems to have become my theme over the last 6 months or so: the arrangements. Boxer contributed a great deal to this album but except for two tracks, all are arranged by Eva Kiviat who leans so heavily on the VP and bass that the remainder of the arrangements often feel non-existent. Sometimes there's a unison rhythm line against the power "ah's" and "ooh's" and the thundering VP/bass and sometimes not even that...just lots of chords. It's quite disappointing if only because the group has its act together in almost every other department on this album that it would be nice if they were singing more creatively constructed material.

To be fair, a good amount of Jewish music uses a verse-chorus structure only, with no bridge, and very often, there is only one verse and chorus that is simply repeated over and over again — a difficult challenge for an arranger to keep interesting and unfortunately, Ms. Kiviat is not quite up to that challenge. Also, a decent portion of the Jewish music being put out these days is as musically uninteresting as the much of the pop music that is released these days, creating an even bigger hurdle for the arranger to overcome. But check out Mitachat Lashamayin, City of Gold and Birthright for an interesting comparison. The first track exposes the weakness of many of the arrangements, particularly on the first half of the album. With no VP or heavy bass to lean on, the arrangement falls very flat. The second is the exception that proves the rule — that more solid arrangements (probably Kiviat's best) can stand on their own with only mild VP/bass production. The last example, this time by Boxer, is another exception that proves a rule — that a basic arrangement can work with better voicings, more creative chord substitutions and just a little movement in the individual vocal lines.

A few other random thoughts: some of the Hebrew issues from earlier CDs creep up here again, especially in Tom Triebwasser's somewhat sloppy solo in Yoya but they'll likely go unnoticed by those who don't speak the language or know the originals. While none of the soloists will blow you away, the women — particularly Tamar Schwartz on Darkeinu — surpass the men. Boheimishe Rhapsody is one the funniest parodies I've ever heard (much better than the group's many past efforts) and a worthy CARA-nominee, though only the Hebrew School-educated will get most of the jokes and even then, maybe not (my fave: "Brit Mila" = "Bismillah").

All in all, I'm so thrilled to say this is an excellent effort from Kaskeset and though it took them a bit longer to get there than I may have hoped, I'm delighted that they've reached the next level and, perhaps with a focus on complexity and development in their arrangements, hope they can build on this to even greater heights in the future.

Slow and steady wins the race, the old Aesop's fable tell us. In the case of Kaskeset, it's not quite as inspirational an ending. SUNY-Binghamton's mixed Jewish collegiate group appears to have made some strides from their past two albums. However, Drop It Like It's Treif doesn't quite break the tape as much as shuffle over the finish line.

It's a bit of a shame really, as there are some treats here. When Kaskeset really sinks its teeth into a song, the results are pleasing. I was particularly impressed by the layers of energy in Asher Bara and the nice groove of the album's early tracks. One humor song per album is typically tolerable, and Boheimishe Rhapsody gets a few chuckles for its haphazard rewrite of Queen's classic with Jewish stereotypes. Overall it sounds like some more careful production by Kaskeset alum Mike Boxer has helped Kaskeset overcome some of its previous tuning and tempo issues.

But Drop It Like It's Treif doesn't ever really maintain speed from its periodic accelerations. Most of the soloists here are mediocre at best, though I liked Ben Darfler's richness on B'tzelem Elokim. There are some occasionally creative moments in the arranging, but they tend to be snuffed out by the monotony, exemplified by the ponderous When You Believe. And a number of the songs in the middle lack the same commitment we hear in the best tracks. The album is too inconsistent to really build any momentum, despite some very solid singing scattered throughout the playlist.

Previous reviews suggest Kaskeset was struggling to finish the race; this album keeps the pace at points but fades a bit in the home stretch. Progress to be sure, but not quite at the level of the larger collegiate elite, or even other Jewish a cappella peers (e.g., Tufts Shir Appeal).