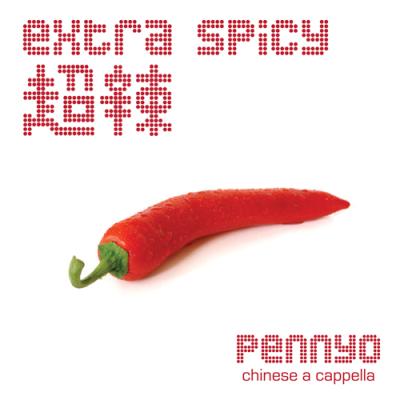 Extra Spicy is a big leap forward for Chinese a cappella, or at least the examples that have made it to RARB. PennYo's new disc is well sung, nicely produced, and just generally better than anything similar I've heard. Now if PennYo could just find some really good songs.

So many of these songs sound like the soundtrack to a forgettable movie, at least to a non-Chinese speaker like me. The tunes aren't very catchy on their own. There isn't much groove and the melodies don't stick in my head; they just sound like pop pastiche. Even the vocal erhu solos melt away, like brightly colored ice cubes or tissue-paper palm fronds after a pleasantly generic theme party.

Yuan Lai Ni Shen Me Dou Bu Yao has a nice swing to it, with finger snapping and a lovely retro solo from Gina Heng. It also sounds like a cover of some American song from the late '80s or early '90s that I can't quite put my finger on. Ditto for the riffs on the other songs, minus the snaps and the upbeat vibe. It's a weird place for these singers, like Stanley Kurnia singing his heart out on the interminably repetitive ballad An Jing.

Jay Chou Jay Chou Jay Chou, as the lone rap, at least has a novelty factor going for it. Elsewhere on the album, Rohenne Lee sounds great on Zhen Shi and Grace Tay gives a nice turn with Zui Qing Feng. The other soloists are pleasant, with all of the songs meeting the basic bar for competence. The more block-chordy songs are a little less in tune, like Ai De Jiu Shi Ni, but I didn't hear anything really egregious. Instead, I just kept searching for a good tune.

With this release, PennYo has proven it has the talent to put together an album's worth of strong material. Now they need to find some Chinese pop music worth the effort.

After listening to as much a cappella as I do in a single year — but especially during the months of September through March — sometimes you hear a recording that is so refreshing because you can't understand a thing that's being sung. I love getting albums in foreign languages. These types of recordings give me the opportunity to simply listen and appreciate (or not) on an emotional and visceral level.

This is the case with the University of Pennsylvania PennYo's third album Extra Spicy. As a collegiate group specializing in Chinese a cappella, they are a part of the burgeoning Asian/South Asian market. This recording fills that niche quite well with some rich harmonies, crystalline bell tones and warm, soothing soloists. The arrangements provide a fairly standard background supporting sweetly musak-inspired melodies, staying out of the way of the soloists and the block most of the time.

Note that I didn't say that any part of Extra Spicy is hot, fiery or passionate. So whilst this review isn't going to center on the fact that the name of the album is ridiculous, I have to mention the inconsistency. There is nothing spicy on the album. It's a good, clean fun album, but more aligned with a banana pepper variety.

Past group President Ryan Leonard states in the liner notes that: "...yet not everyone knows there is a difference between hot and spicy. Being spicy is not just about getting warmed up. It is about sharpness. It is about leaving a lasting flavor that tantalizes the senses and leaves you hungry for more." That is sort of stretching the common definition just a bit. I mean sugar is a spice, but most people wouldn't say that something sweet is "spicy". So I guess the group lives up to such self-defined standards, but having a red jalapeno on your album cover can be misleading in a non-ironic fashion to the rest of the population.

With that being said, there are parts of the album that I love. I'm not an aficionado of Chinese pop stars, but my ex is... even telling me the name of the original artist of the opening track before we finished listening to the whole thing. That opening track Jay Chou Jay Chou Jay Chou is pretty captivating. I enjoy it a lot.

But the two standouts for me are firmly in the middle of the album: track six Tong Lei and track seven Ai De Jiu Shi Ni. These two tracks are absolutely stunning. During Tong Lei, soloist Kathy Chen has an angelic voice, shimmery in all of the right places that absolutely floats over the delicate background. And Kevin Chu's blue-eyed soul take on Ai De Jiu Shi Ni is smile worthy and street corner reminiscent. Even the finger snaps add to the simplistic charm of the song. I can imagine meeting them in the quad on a great spring afternoon and listening to them sing this over and over. We'll call this song refreshing spice.

What I really want to know is what the heck Ai De Zheng Hao is about lyrically that leads them into a startling rendition of Something that Wasn't There Before from Beauty and the Beast. This leads to the fact that the liner notes state that the lyrical translations would be available on the group's website, but as of the writing of this review, they weren't. So I can't make this discovery for myself.

The last two songs really bring down the entire album and point out yet another reason why the album isn't especially spicy. Unfortunately, Ji De sounds like a song that should be sung by someone's eccentric aunt at a family gathering to placate some long held promise of stardom and fame. Some of the more lazy singing is evident on the track Ju Hua Tai from both the soloist and the background singers. Intonation falters and group cut-offs are occasionally non-existent.

Extra Spicy is not for everyone's palate. If you like to experience music outside the western mainstream, pick up a copy. But if you are more interested in something with a bit more zest and zing ... PennYo hasn't hit the mark with this one.

PennYo's latest release, Extra Spicy, is more of the same from The University of Pennsylvania's Chinese a cappella group. As with its previous releases, PennYo offers the listener a cappella covers of pop hits from China. If that's a bit too esoteric of a genre for you, the group does occasionally sprinkle in some American melodies layered over the tracks. But don't get me wrong: this album is pretty much in Chinese from beginning to end. Depending on who you are, that's probably either pretty interesting or pretty boring.

But let's table the whole Chinese-language thing for a second and just focus on the execution of the music. Essentially, we're looking at a group of tracks that range from average to very good, usually falling somewhere in between. The group has a very clear, full sound most of the time. There are some interesting arrangements in the mix, and the group takes care to sing the more intricate moments with precision. Yet much of this solid musicianship is countered by the group's less-than-noteworthy energy levels. Beyond that, soloists are pretty standard, always adequate but rarely displaying any real emotion. Especially when singing in what is sure to be a foreign language to the majority of their audience, a little more expression and emphasis would go a long way.

And that's pretty much the problem I have with this album in a nutshell: it's in Chinese. I said this on my review of their previous album, and there's no avoiding it: when the listener doesn't understand what's being sung, it's much harder to make a connection with the music. In situations like these, you must be able to tell a story through the music. Emote through the performance. Unfortunately, I think that's PennYo's one major weakness, and the whole listening experience suffers a bit for it.

Of course, if you're LOOKING for Chinese pop a cappella, well then, this one's a no-brainer. But I'm going to go ahead and assume you're not, and so I'd have to advise against picking this one up, especially if you've heard PennYo before. It's novel for a few tracks, maybe, but man, in the future, they really need to find something to keep their offering interesting.