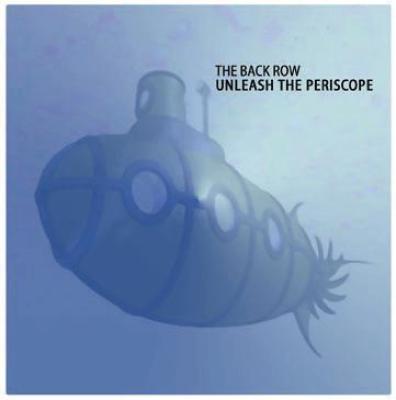 There isn't anything else to say about the album. The guys in The Back Row set out to represent the Southwest in collegiate a cappella in high style. Pulling in the grand poobah, Deke Sharon, to be a mentor and coach was the perfect first step to make that happen. Then enlisting the expertise of producer Bill Hare and Tat Tong to create Unleash the Periscope, a recording that reflects the burgeoning talent, musicianship and charisma, was the logical follow-through.

The recording isn't perfect. Several of the songs in the middle of the album have odd tuning issues. As Simon Cowell would say, the Pearl Jam cover Daughter/Better Man was way too big of a song for group founder Ian Goldstein as soloist. Lyrical phrasing seems unmotivated towards the middle of the disc, and the production wow factor wore off after the first three tracks. Drum sequences tended to get monotonous, but were effective and, on first listen, quite compelling. And the energy isn't consistent, possibly the most saddening aspect of the recording.

But what is good is great. The backgrounds of each of the tracks bring such an aural pleasure that I've forgiven a lot of what would have been distractions for me. Like the incessant screaming on the two opening tracks. Around the World and Feel Good Inc. are strong tracks. I would have closed the disc with Feel Good Inc. because it is too similar to Around the World. They would work better as bookends. The repertoire is a bit eclectic, though enjoyable. Hearing James Taylor, The House Jacks and 112 in the same setting as Weezer, David Bowie and Red Hot Chili Peppers was what — disconcerting, interesting, bold, jarring, odd, strange? Yeah, all of those.

The arrangements don't hurt the group. While they aren't daring by any stretch of the imagination, they support the talent present in the group, which is what a really good arrangement should do. Maybe if Deke had given the group Palm Sunday or Attitude rather than Gone the track flow would have been better.

Speaking of which, agenda time, I'm definitely on the side of collegiate groups covering original tunes by the pros. Either exactly transcribed or radically altered, I believe that the groups in our community deserve just as much coverage and longevity as the mainstream groups receive. So The Back Row has my utmost respect for covering Gone.

Unleash the Periscope is a good addition to the collegiate enclave, and the group is poised to play with the big dogs within a few years.

The all male Back Row from Colorado College set out to make a splash with their debut album, Unleash the Periscope, and they succeeded. Beyond having a plethora of talent, they managed to snag some of the top producers in the genre, assuring a successful effort.

I wasn't that turned on at first listen. Particularly in the first two opening tracks, Back Row has employed all the bells and whistles a technophile could possibly want, and then some. I also took issue with the percussion, which for my taste was just too sequenced, overly busy, and not always appropriate. For instance, on the Pearl Jam medley the beat just struck me as too discoey and not agreeing with the song.

But I liked it more and more with each successive listen once I got familiar with the Back Row sound (though as a warning to aca-purists - this album is not for you!). The first two tracks manage to convey an excellent sense of vocal energy despite the fact you can barely tell it's voices, a stunning and rare feat. I also liked the juxtaposition of the more hyper-produced tracks with tracks of a more traditional glee-club sound, such as Careful and especially Out of My League (even if I didn't care much for the song itself). Back Row sounds consistently good across the board on multiple genres, from rock to ballads to a great rendition of the hip hop song Only You.

Engineering highlights great arrangements, solid background vocals, and a fine selection of soloists who provide a variety of different sounds. The eclectic song selection is interesting and didn't get stale, even after repeated listens.

By the time I had fully digested this album, I was still a little put off by the percussion, and also by the engineering of the basses which tended towards overpowering at times. Despite these minor issues, the album delivers on all fronts. With such an auspicious start, the possibilities are endless for this young group.

You often hear about the importance of first impressions and reputations. This is why when you see an album by a group such as the Tufts Beelzebubs or the Dartmouth Aires, you know you're going to hear something good. On the other side of the spectrum, when you see an album from a group you've never heard of before, from a school you've never heard of before, you expect something subpar. I can't remember the last time I opened an album from a new collegiate all-male a cappella group and enjoyed the music found on the album.

Well, I can't say that anymore. Say hello to Colorado College's The Back Row, who with their debut album, Unleash the Periscope, have ascended into the heart of good collegiate a cappella.

The Back Row wastes no time, jumping out to a fast start with the effects and effective screaming on the opening of Around the World, a fun and jumpy rendition of the Red Hot Chili Peppers' tune. Things really kick into gear on Feel Good Inc. Casey Andree and Back Row Founder Ian Goldstein produce an excellent arrangement that does justice to the Gorillaz original. (Feel Good Inc. appears as the opening track on Voices Only's 2006 compilation.)

Yet my two favorite tracks on Unleash the Periscope are James Taylor's Your Smiling Face, an upbeat, fun little ditty that showcases every good thing about The Back Row, and 112's Only You, a hip-hop monster of a track that firmly cements Tat Tong as the best hip-hop/R&B a cappella producer in the business.

The Back Row still has some things to work on, however (and with a group this young, I would hope that hadn't reached their peak yet). The group is filled with immature and undeveloped voices. The guys are young and it shows (half of the guys are freshmen and sophomores). They are capable singers for sure, but they don't quite possess award-winning talent. I imagine this will change as the current members age and their presence at Colorado College draws in better singers.

Also, I fear that The Back Row relies too much on the job it knows Bill Hare and Deke Sharon will do in the mixing process. It sounded to me like there were tuning problems in the recording process (the album was self-recorded by Goldstein and Ford Kerr), but they were covered up by Hare and Sharon's effects and mixing. There were a few too many effects used on this album.

Still, there is so much energy on Unleash the Periscope that it's hard not to enjoy yourself. It is so often we hear about groups that rock on stage, have so much energy, and you can tell how much fun they're having just by watching them, but then they get into the studio and all the spark disappears; it's like another group showed up for the sessions. That doesn't happen with The Back Row. For once, a group was able to translate that drive in the studio.

In the liner notes, it states: "Unleash the Periscope marks the culmination of the Back Row's three-year quest as a new a cappella group to make a debut album underscoring both our and the Southwest's place on the national a cappella stage." It is an understatement to say that The Back Row has indeed secured that place on the national a cappella stage with their first album. They have set the bar quite high for themselves, and I only hope that can live up to that standard with their next release.