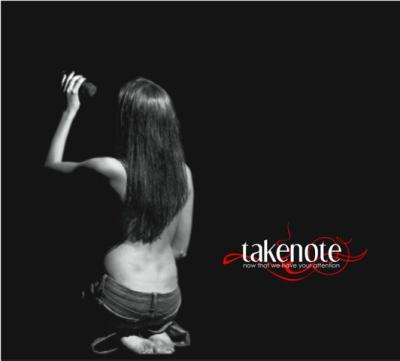 In the sea of voices, the ocean of images, it's no wonder that TakeNote felt the need to grab headlines. Now That We Have Your Attention has a singularly arresting cover (which is exactly what its model declines). It's bold and beautiful. And now that they have our attention, what will they do with it? A lot.

Under the guiding hands of producers Gillian Trimboli and Dave Sperandio, TakeNote delivers range, depth and passion with a pop sensibility. From belty (This Time Around, Fighter) to groovin' (Someday We'll Know), from introspective (Fix You, Hallelujah) to danceable (Baby It's You, Carwash), from heartfelt (So Are You To Me) to simplistic (Wishin' and Hopin'), TakeNote runs the gamut with grace.

Admittedly, they do far better than average at keeping a unified sound through it all, but with three "mixers", Gammon, Sperandio and Hare, 23 different female vocalists, and a guest vocal spot by Tigeroar, it sometimes feels like a few goateed alternate universe TakeNotes got beamed in with the original. It makes for a perfect concert and an enjoyable but slightly bumpy album.

My favorite TakeNote is strong, sexy and upbeat and that's what most of this album is all about. I could call out the hits, but here the scores highlight my favorites nicely. I definitely recommend Now That We Have Your Attention. Fans of TakeNote will be playing this one a long time.

Seems like Clemson University's female rock group, TakeNote, has taken note of the barbs, jabs and criticism (and praise) lobbed their way for the past two years. They decided to produce one of the most outstanding female albums of the new millennium.

Songs like Behind These Hazel Eyes, Fighter and You Thought Wrong speak to this newly aggressive persona, much like the originals. The only fault that I have with a lot of the songs on the album is that they tend towards a safe tempo zone instead of pounding forward a more driving rhythm. Girls, if you are going to bring the balls, swing them like boulders.

The arrangements are really what propel this album into the stratosphere. Even the most simplistic of arrangements like Natalie Wittig's Wishin' and Hopin' is still finely textured. The wistful poignancy of the original is replaced by an almost cheerleader-like enthusiasm and passion for what she'll make happen. Instead of "wishin' and hopin'" that the guy will come around, these ladies know that "control" is not just a Janet Jackson song. In fact, the song so struck me that I used it as underscoring for a play I directed this past summer along those same themes.

Speaking of Ms. Wittig, her original song Let Me Go could have easily been a ballad written and performed by Clarkson, Michelle Branch or Vanessa Carlton. Amy Fischer's vocals create an air of innocence, supporting the growth that the protagonist has achieved in taking charge of her of her own destiny and life.

And whereas on On the M60, I thought that ending the album with the mid-tempo ballad Helplessly Hoping was a huge mistake, closing with Coldplay's eerie Fix You is a stroke of genius. TakeNote dares to be different and defy all expectations. And makes you wonder what they are going to do next.

I did find fault with some of their production choices, which tended to skew towards the over-produced side of the a cappella coin. Even though I gave Fix You a top score, the electrified "wa na na" section got a little repetitive and was placed too prominently in the mix. But it's such a small quibble. And I really don't fault them that much for wanting to sound like the big dogs while keeping their feminine mystique.

These ladies have come out swinging. We in the a cappella world need to be ready for the onslaught.

Oh my god, yes. Now that they have MY attention, TakeNote certainly grabbed me by the balls. Okay, well they would have if I had any. I swear this album is like a vocal orgasm that makes me scream with delight and ecstasy when I pop it in my CD player. In the a cappella world, you're either in or you're out. Auf wiedersehen, USC Sirens. Make way for Clemson TakeNote. I've never been this excited about an all-women's album. Ever.

And with a powerhouse team like James Gannon, Bill Hare, and Dave Sperandio working on your album, you probably couldn't NOT make a disc this kick-ass. But yes, I know that a good production team does not a good album make, and that these ladies must indeed have the vocal chops to pull this incredibly sexy, sassy, and overall ridonkulous release.

Every soloist, from the aggressive and fierce Gabby Carvalhal on Behind These Hazel Eyes to the sweet (but certainly not sappy) and compelling Natalie Wittig who fronts the lovely Gammon arrangement of Hallelujah (a BOCA 2006 selection), is strong. And whose brilliant idea was it to feature TakeNote's male counterparts TIGEROAR on Someday We'll Know? Because, for once, this brilliant idea of guest vocals is a great move that truly enhances the sound of the album. No longer are male/female duets relegated to mixed groups. This track in particular stands out; it doesn't feel as though there are a billion people singing in the back. Here is where expert mixing and arranging truly matter.

And with each song the music just. keeps. getting. better. The underlying spoken track under the vocals of Carwash makes the song feel like a party: I want to get up and dance. There's a little hollowness in the middle of You Thought Wrong, but the arranging around it quite makes up for it. And I never thought I'd be one of those folks who get in the car with her bass speakers shaking the life out of everyone around them, but Baby it's You is one groovy track where you just have to turn up the volume.

Wishin' and Hopin' is really the only disappointment here, an out-of-place piece that lowers the bar on creativity. It's as basic and uninventive as can be, and rather a bore. And though not perfect, props go (once more) to Natalie Wittig for her original Let Me Go. Allow me one more chance to gush: I love that groups are covering Ben Folds and eastmountainsouth. A decidedly different sound from the Boston College Bostonians' You Dance, So Are You To Me is a somber, eloquent ballad with a resonance that easily transcends the space of the album that leans toward rock/pop.

My one complaint — and it's a minor one — is that I wish more of the songs had been arranged by members of the group. A little more than half of the tracks listed have at least one arranging credit of someone not in the current TakeNote roster. With women like Natalie Wittig, Gillian Tromboli, and Amy Fischer already in the arranging talent pool, more TakeNoters should be mentored in order to keep the skills in-house.

Finally, Coldplay's Fix You makes a killer conclusion to the album. It's got everything — hard-core pop, mellow sincerity, and a powerful layering of complex sounds — that makes an a cappella piece excellent. I probably can't gush any longer about this album. If you're one of those doubters who think that women's groups can't quite achieve 'Bubs' greatness and magnitude, Now That We Have Your Attention will change your mind, if not your life.

To order this or other TakeNote albums, visit the group's website.