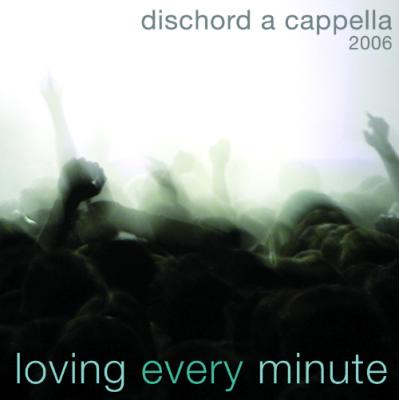 Loving Every Minute, the latest album from University of Pennsylvania's Dischord, is an exercise in consistent mediocrity. While we're no longer suffering the persistent pitch issues present on Changes, neither are we treated to anything that warrants a second listen. A cappella should be nothing if not fun, and this unfortunately named piece of work falls far short with its enervating tracklist.

Now before I continue my Scrooge McDuck rant, let's acknowledge the fact that Dischord's primary mission is community service. There was a similar group at my school and they were a reasonable bunch of singers who made the elderly, children, and disadvantaged enjoy their day a bit more. But good intentions and purity of heart unfortunately don't tend to show for much in the studio.

Dischord walks a fine line here between pleasant and plodding, falling to either side depending on the soloist and song choice. There is a lot of in-tune singing but not a ton of actual performing, meaning the soloist's contribution basically hinged on whether one likes his/her tone. On the other side, about half of this tracklist is standard 2004-2006 collegiate repertoire and half of it is stuff I had never heard before. Given the choice between hearing another whiny version of The Luckiest or a quirky unfamiliar Tidal Wave, I'm inclined to choose the latter; kudos to Dischord for trying not to mindlessly tread the more obvious path of song choices. But with a little more conviction and a lot more energy, those choices might have actually ended up something worth noticing. Just about every song should have had the tempo cranked up 10% and the intensity 100%.

Most of the reviewers on Changes noticed an upwards trajectory for Dischord, as well as some creative arranging that showed glints of promise. On Loving Every Minute, they seem to have settled into a comfortable if undistinguished perch, which does fine by their honorable intentions if not any larger sonic ambitions.

The opening lyric to Anyway, track three on the Dischords' second album, Loving Every Minute, neatly sums up my overall reaction to my listening experience:

You've got to be kidding me.

Lest you think I'm trying to say that the album is a bad one, it's not. Actually, this co-ed group from the University of Pennsylvania is extremely talented in the backing vocals. Nice blend, soothing tones, great intonation, and easy arrangements that they've mastered. But when every song sounds exactly alike, it's pretty boring. After a requisite amount of time listening to it for reviewing purposes, I've placed it in my "music to sleep by" pile (hence the high repeat score — I love sleeping). Loving Every Minute works almost as well as Ambien®.

The first three tracks might as well have been one long song. It could be that I'm not familiar enough with the work of Gavin DeGraw, Acceptance, or Dynamite Hack, but I would expect a bit more variety than what I'm hearing here. Either that, or Dynamite Hack should consider changing their name to "Milquetoast Nerd". Claire McMurrian's light and airy vocals flows directly into Dan(iel) Roberts' light and airy vocals, which transition into a slightly more moody offering by Amanda Feldman. It just goes on from there. Good thing too that most of these kids (even if they do sound really young) can sing.

Tempo is the major culprit here. Mr. Roberts makes sure that the group never wavers from a speed that's slightly faster than a major pop ballad, a tempo that works well with the simplistic arrangements and the elementary-level of vocal percussion. If this album were elegible, I'm sure it would be a hit on one of the Adult Contemporary charts. I mean, when you can make Natasha Beddingfield's pop-dance hit seem neither popish nor danceable — you get my drift. Because of the moderato beat of To Be With You, the rallentando of "let me be the one to hold you" was made unnecessary and distracting. I can't tell if he was playing it safe or just didn't realize that everything turned out that way. I've known music directors who've purposefully slowed down songs so that the group can actually perform a song without having it run away from them.

Going forward, I believe the group is ready to move from standard block chords and most other homophonic-leanings in their arrangements. Future directors should challenge the group to create more textualized music. Add some dynamics, tempo changes and tonal variety to the mix. The Faux Paz-inspired Both Hands, which subtly incorporated lyrics from the ubiquitous song of 2006 (Hide and Seek, in case you couldn't guess) and could be considered almost presto in its delivery, was a step in the right direction.

Loving Every Minute isn't a necessity for your a cappella collection, but it makes a good addition — especially if you need some zzzzzz's.

The newest album from Dischord A Cappella, a co-ed group from the University of Pennsylvania, is just the latest example illustrating my current thesis on technology in a cappella: technology allows a much broader range of people to make a palatable album, but more difficult to make a true standout.

Loving Every Minute is a snoozer. This stems first from song choices. The album opens with a mid-tempo pseudo ballad and continues in that vein for almost the entirety of its 41 minutes. Even power ballads like Mr. Big's To Be With You and the relatively up-tempo Life Less Ordinary blend into the sameness. Arrangements also reinforce the lackadaisical attitude the album presents. Plenty of closed din, doh, bin and similar syllables, and a lack of more open-mouthed syllables such as ah, keep the sound dulcet rather than poignant. Its very easy to stop paying attention and let your mind just sort of wander.

Performance doesn't add much to the energy spectrum, either. The basic building blocks are there. The group tends to sing in tune, with a decent basic blend (though it could stand a little more bass), and has some dynamic contrast. Yet performance lacks nuance. The sound, tempo, blend and style of the first track is repeated throughout. In track two the soloist is singing "I wanted to feel anything different", and by that time I was thinking the exact same thing. Enunciation and attacks are particularly weak. Putting a little bite into the opening of notes would go a long way.

Finally, there's production. I'm not an engineer or an expert on engineering, but it sounds to me like the group is basically run through the same filter for the entire album. Some of the slower tracks such as Anyway have a semblance of richness, but the rest of the album sounds thin and tinny, often more synth than voice. There's some nice sparkle on some of the parts, but overall I felt the engineering really restricted the range of emotion the soloists could present. The mix frequently sounds muddy and mushy, with parts not clearly defined. Too often with technology there comes the infamous tradeoff — record/mix the album fast and cheaply, but restrict the energy of the voice. Loving Every Minute is a prime example.

The one semi-standout is the album closer, Unwritten. On this track I begin to hear the beginning of a group I might actually be excited to listen to. Articulation gets a little meatier. Blend gets a bit meatier. It actually sounds up-tempo. Is that some energy I am sensing? The group needs to channel more of this sound on their next effort.

I can't imagine anyone not connected with the group getting anything from buying this album. Loving Every Minute remains somewhat pleasant but ultimately uncompelling.