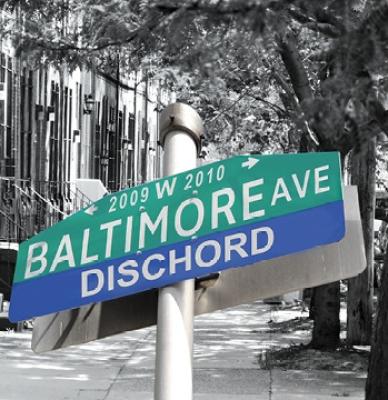 Dischord's Baltimore Ave is a respectable yearbook album of well sung imitative pop rock. From the sound of things, this mixed collegiate group from the University of Pennsylvania is drawn inexorably towards the introspective rock ballad. When the Lennon/McCartney classic Eleanor Rigby becomes the hard-hitting up-tempo number, you know your track list is a bit of a downer. Considering all the upbeat photos in the liner notes, these guys deliver a lot of pathos. But not everyone wants upbeat tunes; if you're in the middle of a break-up, Dischord may be just what the doctor ordered.

And speaking of liner notes and crediting the great team of Lennon/McCartney with writing Eleanor Rigby ... Dischord doesn't. The group doesn't credit any composers. And it should. We get "APB" (some version of Artist Popularized By), lead, and arranger. These are great, but composers come first. Hopefully Dischord will ensure that this missing information is included on its website and in MP3 metadata.

While going with your strengths and finding your niche are key traits, and goals that most groups fail to achieve, the fact that Dischord has landed on such a collection of low energy, broken-hearted rock ballads makes judging each of them on their own merits a real challenge. For example, Falling Slowly is sung acceptably, but by the time it arrives as the album's tenth ballad, it literally sounds like it's in slow motion.

Sorrow's more deftly arranged intensity and beautifully gifted lead singer elevate it from the long march which is Baltimore Ave. Along with Eleanor Rigby's driving alt-rock energy, these mark the album's energetic high points. Focusing in on what works about these two songs could help Dischord lift its next recording without asking the group to change its style. Both songs are as lyrically intense as the rest of the tracks. Both keep with the dark mood favored by the group. But both have moments that the listener can grab on to. They have unexpected turns, dynamic changes. For Dischord to excel musically, it has to challenge its arrangers, leads, and producers to create those moments, to use space, dynamics, and true expressivity, even when the original song fails to provide them.

Dischord has all the talent to sing well when moment arises. But overall, this album is best heard in short spurts. End to end, despite Dischord's talents, Baltimore Ave is a grey roadway, indeed.

I'm about to make the oddest comment I think I've ever uttered about a recording. The Dischord album Baltimore Ave is, in a word, "milky". What? So bear with me. The album is full of rich nutrients like a lush studio production quality and some of the most emotionally engaged performers that I've heard in a while. Say it's sort of creamy and pleasing to the palette. But for those of you who may overindulge, it can be upsetting to the stomach and utterly not good past its expiration date.

The best thing about the album is that the backing vocals sound great overall. The parts don't skimp on emotion or execution. The same can't be said for all of the soloists. The women are better than the men, but that's not saying a whole lot. They do give it their all, but intonation, support, and lyrical phrasing give a rough edge to songs that should sound whole — maybe collegiate, but not sophomoric.

Normally, I love natural sounding arrangements coming through my speakers; it's easier to pick apart the structure and really appreciate the creativity of the arranger. And some of these tracks are really fun! But the natural approach also exposes the musical limitations of certain groups. Several of the tracks suffer from balance issues — but not particularly any blending issues ... the voice parts sing as one and really lock together. Usually, the issue is caused by too many open vowels in the upper voices with almost silent phrases in the male voices when songs aren't constructed correctly. And production can mute the men even more, giving them a more ethereal presence than a sonic one.

By now, most of you readers should know that Eleanor Rigby is my favorite Beatles' song. So I was extremely excited to see it listed here. And in fact, I do inflate the score for the quality of the song. Even though the execution of both the solo and the song overall is less than stellar, the Dirt Poor Robins have to be given credit for breathing new life into the song. This is fiery energy that is exciting. And Brendan MacFadgen does a great job of transcribing it for Dischord. It's a new rock story that brings out all of the idiosyncrasies that are glossed over the first few times you listen to the original.

In Falling Slowly, which overall is a good song, the basses almost disappear on the "dm", and the song ends on long held out "jin, jin, joh". I almost laughed. On Slow Me Down, I don't understand why the particular pronunciation of "dahwn" (read as "down") is articulated so 1) brusquely, but then also so 2) mesmerizingly in the appregiated upper voices. And then there's the ladies screaming right before the chorus in Sorrow. I get the unification attempt, but the mix is awkward against the rest of the background and udderly jolting.

If you are a previous fan of Dischord, by now you'll already have picked up your copy and enjoy your favorite tracks. If you really need 2% more a cappella in your life, then by all means, the rest of you should give this group a shot.

It must be hard being a coed a cappella group at the University of Pennsylvania. Unless you're Off the Beat, you probably have a hard time getting noticed, so I have to hand it to Dischord for trying. Ultimately, however, Baltimore Ave feels like a "me, too" effort. Consciously or not, the album borrows OTB's stylistic elements without ever coming close to its level of quality.

Take Eleanor Rigby, here presented as a cover of a cover by Dirt Poor Robins. Blasted from a laptop in the next room, this song might pass for the latest OTB single; arranger Brendan MacFadgen has learned well from his a cappella peers, "jin din doh no" syllables and all. But this group doesn't yet have the mastery of the studio that OTB has, and the song comes off as a cheap imitation. Other OTB-style song selections are more successful, owing more to the leads than the backs: Emily Garvey brings the requisite angst and anger to Paramore's Decode, and Emma Katzka turns in my favorite performance of the album on Flyleaf's Sorrow.

When the leads aren't on their game, though, the album really drags. This is more due to poor pairings than poor singing ability. Sarah Van Sciver does not have the range, or the runs, to really do justice to Halo. On Between the Lines, Avantika Agrawal struggles with the low notes but sails over the highs, whereas the emotions in the lyrics suggest that it should really be the other way around. I don't believe for a second that sweet-voiced Melissa Braff would actually do any of the things she sings about in Before He Cheats. And David Falcone has a lovely tenor that would not be out of place on American Idol, but I wish he had better material to work with than David Cook's The Time of My Life.

Interestingly, all of the songs mentioned in that last paragraph, as well as many other songs on the album, were arranged by their soloists. This may just be coincidence, but I could not help wondering if those singers were really the best choices for those songs. On the other hand, arranger/soloist Eric Michael was a sweet, soulful surprise on Give Me Your Eyes, and arranger/soloist/co-music director Michael Saunders shows remarkable control on Broken. This song also has some great dynamic moments in both the duet and the backs, as does Aaseesh Polavarapu's arrangement of Falling Slowly (along with a wonderful coda).

There are glimmers of a better, more mature album here; indeed, Baltimore Ave did grow on me the more I listened to it. But if Dischord really wants to get noticed, the group needs to find its own style. Dischord is on the cusp of being the next big thing from Penn — if only it would dare to be different.