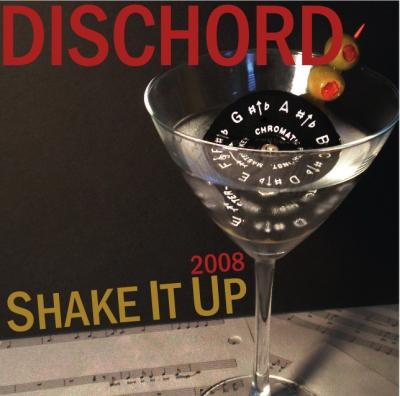 Shake It Up is a wonderful recording by the University of Pennsylvania's co-ed group Dischord. The group just keeps getting better, and you can hear their improvement on Shake It Up. For all of you purists out there who like listening to music pulled from the college radio playlist, this is the group to be in and/or to listen to. The sound is lush, energetic, natural and in tune, and the vocal percussion — almost more than one could ask for by today's expectations.

Yeah, Dischord goes for the completely unadorned sound. And it works so very well for them on most occasions. There are a few moments where the incessant pounding of the sopranos for measures at a time nearly drove me batty. But from the opening choral sounds of Fidelity to the trailing chord of Motorcycle Drive By, the members of the group had me in the palms of their hands. They simply sing with an excellent musical quality without relying on heavy studio tricks to alter or mask any deficiencies.

The creativity/innovation score could have gone up if the arrangers had taken more risks. Dan Roberts and Emily Garvey start with an almost hymn-like opening to Fidelity. They should consider carrying the re-imaging of the song even further. The arrangers have the talent in the singers to take on more challenging arrangements so they should capitalize on that abundance as much as possible. The surprise here is that nine different people take part in the arranging discipline and yet there is a consistency of quality, and what I take to be the "Dischord Sound" across the board. This is a great accomplishment for the group.

For the future I'd love it if Dischord would include more dynamics in their tracks. That's the only thing holding them back from being truly stellar recording artists. So get Shake It Up and see if you agree with me.

Shake It Up is an apt title for the latest release from UPenn's Dischords. They've taken ingredients from the typical collegiate a cappella album, shaken them together, and sprinkled liberally on their latest work. The result is a passable, but bland, concoction.

Step one. Take one cup teen-angst ridden, forgettable original pop/rock songs and fold into passable but uninspired arrangements. Make sure to grease the sheet with "doh-nah" and "jo-din-doas". For spice and flavor, sprinkle in a pinch of grooviness; for instance you can use Shame for You, which is available at many specialty grocers.

Step two. Sing, but not with enough feeling or originality to set your dish apart from everything else on the buffet. Being in tune most of the time is fine. No need to be too meticulous about it. Some swoops on the entrance of notes (The Way I Am) and vague tuning on solos (Fidelity) is OK. Blend on medium-high to an almost-not-lumpy consistency. If your sopranos sound unfocused and mousey it's OK: that's typical of most meals, and we can fix it in post-production. And don't forget to stir in soloists who sing well but try too hard to sound like the original artist.

Step three. Find a professional chef (producer) to do the plating: diners will be fascinated by the fancy presentation (engineering) and overlook the actual content. Here, I need to give Dischord some props for going off-recipe with an organic look-and-feel. Are those actually voices I can hear? Unfortunately, the reproduction sounds compressed and thin, and didn't leave me with the visceral impact that truly excellent organic singing can evoke.

Step four. Shake It Up, serve and enjoy. You'll impress your guests with your likeness to Chili's and Applebee's: decent, consistent food that is uninspired and can be found on almost any campus. Personally, I'll eat it, but won't rave about it to my friends.

There is a tendency, with albums submitted to RARB, that the title is tragically inappropriate for the material. Did Dischord really shake it up on their latest album?

Eh ... not really. Maybe they gently swished it around a bit. The co-ed group from UPenn definitely played it safe, for the most part, with this release. That's okay — after all, nothing's really bad on this album. But nothing really stands out either. If anything, the lack of deviation from the norm is what holds this album back.

Like I said, everything on this album is at least fine, and some stuff is pretty damn good. There's pretty good energy across the board, which really helps songs like The Way I Am and Shame for You, the former because of its considerable build and the latter because of its contagious groove. I felt that Mad World (a challenging song to execute convincingly) was very well done and much needed on a track list that otherwise boasts mostly pop hits from the past few years. Some of the arrangements are pretty interesting, and tuning is mostly pretty solid, save for a few notes here and there.

But oh man, some of this stuff really drags after a while. Despite solid energy from the performers, there's too much of the same on this album, and it's tiring. Regina Spektor, Paramore, Death Cab, Evanescence, and K.T. Tunstall are just some of the bubblegum artists to crowd the album's twelve tracks. Nothing wrong with this type of music — I love Paramore, for the record — but there's very little variation, and this type of music wears thin. These are the kinds of songs you'd expect collegiate a cappella groups to sing. They're comfortable with this music. They hear this music on the radio. The whole campus knows these songs.

Considering that the group as a whole seems pretty talented, I'd like to hear the group take more risks. Throw in a few other decades. Some different styles. Diversify! When there's something for everyone, the listener won't know what to expect next. This is a matter of preference, but I believe it makes for a more interesting experience.

Shake It Up is a safe bet, and it's a good album to purchase if you like solid, standard a cappella for easy listening. There are some pleasant voices and some well-executed covers. But for those looking for a bit more out of their a cappella records, look elsewhere. You won't find anything particularly intriguing here.