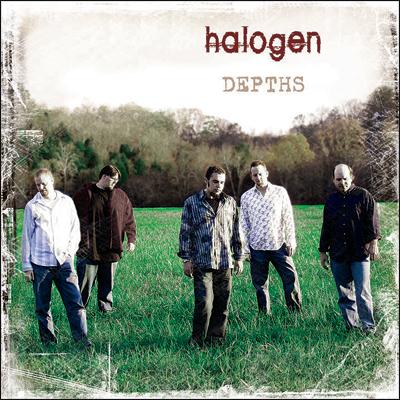 Depths is not engineered with much panache. While I am not always a fan of excessive use of auto tune or making an album sound like it could never be replicated in a live setting, Halogen should have used the studio to clean up some of their songs. If their intention was to duplicate a live-sounding album, they did a fantastic job. Tuning problems are not overly offensive on any song, but do hinder some songs from being great and limit them to being just average. Problems are often heard at the ends of phrases, into transitions, or even the rare key change (in Think on These Things the key change almost seems like a mistake).

Many of the arrangements suffer from repetition within each song. The format is as such: verses with mono-rhythmic chords and choruses with words interjected by background parts, and then slight variations in bridges before concluding with one last chorus, often repeated twice. Arrangements are boring but perhaps reflective of the genre; I am not well-versed enough in Christian a cappella to know. Holy Rain is their most creative arrangement, with arpeggiated chords and a nice build within the chorus.

Unfortunately, the vocal percussion detracts from, rather than enhances, nearly every track that includes it. There are lots of tempo problems with vocal percussion, it sounds canned, and the patterns are very basic. At least they realize their limitations with vocal percussion, but on Joyful Noise there is a brief VP breakdown and it is unimpressive, sloppy and unnecessary (they should save it for a live setting). Ethan Few, the lead for Halogen, has a very clear, well-tuned solo voice that fits nearly each song he sings, but I would've liked to hear more variation in what he did throughout the album.

I cannot ignore the fact that every song on Depths was written by members of the group, and from a songwriting standpoint, there are a few that stand out, such as the ballads Depths and There's One With Me, and the infectious grooves of Thank You. An unexpected, out of place, but somehow clever hidden track called If I Could Rap is a self-deprecating jab at how they have no rhythm and wanted to be like L.L. Cool J.

Though I will probably not listen to this album again (being Jewish it's not the first genre I reach for), from a purely music marketing standpoint, I could see hundreds of church members grasping for this CD at the end of a performance. With more creativity within the arrangements, additional engineering and tightening up vocal percussion, Halogen's next effort in the studio could be a fantastic one.

Halogen is back with another spirited jamboree of mostly original compositions on Christian themes. Unfortunately, there's not much to recommend Depths to even the most faithful of followers.

Bad tuning continues to rear its ugly head on Depths — most songs never fully lock, and moments like the chorus of the title track and the decidedly unjoyful, falsetto squawk that closes Joyful Noise are comically bad. When Halogen pulls their pitch together and puts a bit more zip in their step, we get passable tunes like Free At Last or He'll Still Love Me. But the majority of Depths consists of Ethan Few singing capably over the uncomfortable drone of his bandmates, hardly a recipe for heavenly sound.

Few has quite an instrument at his disposal; at his best, his pop-country twang reminds me of a mellower Rascal Flatts, and he shows good dexterity as he navigates the tracklist. But without the backing crew to support him, Few can't get very far. The call-and-answer arrangement on Think on These Things should really wail, and the ballad chords tend to feel listless. It's a bit unseemly for me to sow seeds of sedition, but I wouldn't mind hearing Few sing lead with a new group and songwriter in tow.

Most of the lyrics on Depths seem a bit more introspective in describing a personal relationship with God, if a bit too cliched to carry the album title. In any case, we're not treated to much like the incendiary lines on Halogenesis, which got my colleagues so up in arms. That makes the track I Still Believe all the more disappointingly low-road. Lines like "you can call me intolerant if it helps you sleep at night" show that Halogen is still as confrontational in their Christianity as ever. Having grown up in the church, I've seen my share of people try to cloak close-mindedness in the guise of truth and light. It doesn't come off any better packed as an a cappella track.

In the end, any amount of discussion on Halogen's lyrics or point of view is fairly moot — Depths isn't a musically pleasing enough effort to deserve the debate. Let's hope Halogen brightens up this aspect on their next attempt.

What a difference a few years make. I tried to lay the smack down on Halogen previously, as the earlier recording by this religious group was anything but joyous and uplifting for me. They've definitely reached a new depth in terms of musicality, songwriting and performance on their newest CD Depths. Elegantly sung, straightforwardly produced, and smoothly delivered, the group has created a very pleasing and moving contribution to the Christian pop/rock genre.

These songs are heartfelt and touching, everything the earlier album wasn't. Most of them are a personal conversation with a higher power, lyrical enough to touch the soul. And with Ethan Few's still amazing voice, they soar. The proselytizing is negligible. Well, almost.

On first listen, it seemed like I Still Believe was a personal attack, in retaliation for certain comments that I had made in the last review: "As their website indicates, they are a true Christian ministry, with lyrics lifted straight from the Bible reinforcing the tenets that many people learned in Sunday school. The group comes close to damning the very unsaved people they want listening to their music. WRLD FM set a negative tone from the beginning, which I had to overcome so that I wouldn't simply disregard their music without proper critical analysis. Fishers of Men alienates on the first take, though subsequent listens revealed that the song is about becoming more understanding (I doubt if I could say accepting) of the 'less worthy'."

And now the opening section from I Still Believe: "I've been told, that confrontational Christianity isn't the way to go./ And, I've been told that God will love you no matter what you do, yes that's true./ But in this moral relativity of this world and its insanity we've found a way to make everything okay./ I still believe that God's the only way..."

The song does go on from there, so you can see how one could make that leap of faith, right? So my rankles were raised, but again on further listening, I realized that the song is about a personal journey and sticking to one's convictions. And again, that's what true religion should be about. The personal relationship that you've created with your higher power. Few seems to be learning to preach using sugar instead of vinegar. The anger (along with the self-righteousness) is gone.

The only major problems with the album are the occasional blend hiccup and the fact that the arrangements tend to be boring. Very straight-laced and unassuming in the background. They use a lot of standard block chord phrasing and structuring. The simplistic style works on songs like Free At Last and Depths, but a song like Thank You would have benefited from a little more urban style to support Few's more jazz/gospel solo.

My two favorites were two of the ballads: the Michael D'Elia penned album-titling Depths and Few's Holy Rain. Both of these songs were simply magical. Floating along and carrying the listener on a gentle journey of peace. Wow.

If the singles are available online, definitely get the two tracks mentioned above; they speak to me on a human level first and foremost, and they work on a spiritual level as well. But you wouldn't be wasting your money buying the whole album either. That way, you can hear the hidden rap track. It's better than the guys give themselves credit for, and proves that some they have more than spiritual "soul" in the group.