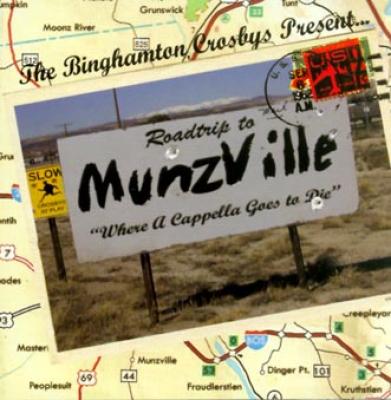 The Crosbys and I share something in common: we both love rockin' tenor solos. Unfortunately, the Crosbys don't quite have any rockin' tenors. They have lyric second tenors and good baritones. They have good basses, too. Just not rockin' tenors. So what's a group to do? The Crosbys are undaunted. They go full throttle with a spirit of karaoke abandon that permeates the album. It's as if to say, "Tonight, yes tonight, for just this moment, I will be a rockin' tenor, not through anything as pedestrian as vocal technique, nay, but rather through the sheer power of my mind! And also five kamikaze bombs and a heady toke. Now pass me the damn mic.". Or at least that's what I like to imagine. So fun times yes. Art, no.

Vincent is the first song on the CD where the delivery matches the arrangement. Yes, the song comes across as a piece of musical theatre, but it also sounds like it was supposed to be that way. Everything before this is an attempt (with varying degrees success) to attain something that remains out of reach.

The Crosbys' arrangements have moments when production, effects, syllable choices and delivery all align. These moments are hardly rare. There's a lot of "Hey, that's pretty cool!". Unfortunately, it's always followed by "Oh, but that's not.". That makes the moment enjoyable but the song less so, and the album even less so. "Mudville" is flashes of promise.

Highlights. Loved the electronic effects opening Antigravity and You Better You Bet. Wryly smiled at I Can't Win and the ironic, twisted coolness of the dorky syllable choices: "Jen-jen-jen, no I never again...". Leaned back into the simple, folksy sound of What Might Have Been. It felt honest, even if it would have benefited from gentler, less distracting syllables, particularly on the bridge. Loved the in your face arrangement of Unchain My Heart including the badass wall-of-countertenors. Loved the backup syllables and the hidden ending in She.

You have to believe that these guys win hearts and get loads of laughs. You have to believe they put lots of work into a great memoir of their years singing together. And as a Yearbook, instead of a work of art, it's excellent. And there's nothing wrong with making that the goal. It's just not the benchmark RARB uses to grade. So what? Keep on keeping on Crosbys!

If RARB were like facebook, you would all get a news feed with a broken heart saying "Tom Czerwinski is now single". That's right, ladies and gentleman, my torrid love affair with the Binghamton Crosbys is over. (For evidence of our past deeds, see my reviews of Crosbys 101 and Crabs and Tartar Sauce.) But all good things must come to an end, even the Crosbys' win streak.

Roadtrip to Munzville is lacking, an average album that fails to distinguish itself. They start with bad material, with a song selection that's fairly weak, and use arrangements that don't spice things up much. There are a few exceptions. Mike Boxer delivers in typical style with the opener Renegade (which happens to be one of my all-time favorite songs), and Antigravity has a fantastic arrangement that was unfortunately marred by a terrible solo. The closer, an original by Dave Kern entitled She, also adds a nice touch. Leave it up to the Crosbys to write a delightful, catchy ballad about pedophilia. Things look even bleaker for the future, as most of the arrangements on Munzville were penned by alums.

I also disagree with some of the production choices the Crosbys made. I loved the Crosbys for what used to be the theatrical, emotional, human element they brought to their performances. Now, most tracks on Munzville sound washed out and electronically generic like a ton of other albums out there. You Better You Bet is a perfect example of a musically proficient but unmoving technical marvel. The album is well crafted, with decent tuning, okay blend and a nice, polished sheen to the sound, but there isn't much that's outstanding.

To be honest, I was always sort of jealous of the Crosbys. As the frat pack of a cappella they never took themselves too seriously, and in enjoying fun they managed to make an excellent product. Unfortunately, a combination of the Crosbys' moving slightly back and the rest of a cappella moving greatly forward has stuck them in the middle of the pack. If there is still some Crosbys magic left, they better pull it out fast.

Until then, my lonely, broken heart icon will wait for another Prince Charming to come and sweep me off my feet.

The Crosbys are back and up to their old tricks with their latest studio effort Roadtrip to Munzville. All the things you'd expect from a Crosbys album are here: funny background syllables, in your face energy, and the raunchy sense of humor that has become part of their signature style. At the same time, a lot of the problems that one may expect from such a style pop up as well, problems that have plagued the Crosbys in past reviews. All in all, it's a good album, but there are a few things that kept this album, at least to my ear, just shy of greatness.

I was impressed with the production on this disc within the first minute. The harmonies that open Styx's Renegade are sleek and metallic, but still manage to hang on to the warmth and fun vocal character that defines this ensemble. Next, the crisp Mike Boxer edited drums kicked in (very similar sound to what we were treated to on the Bubs's last release Shedding) and I knew I was listening to some polished work. Kudos to Mike Boxer and Evan Behlivanis for turning in some pretty tasteful mixes which are fun and creative without being overly robotic.

I was torn when it came to a lot of the arrangements. On the one hand there are a bunch of fun, funny, and creative moments. (How often do you hear "smoke a doobie" pop up as a background syllable? Kudos again to Behlivanis.) Those are the sorts of things that make this group unique, and I wouldn't trade them for anything. On the other hand there were moments that seemed a little off, due in large part I think to too much activity and/or awkward syllable choices. I know this is a comment that the Crosbys have seen before, and I'm sorry to say I think it's a problem that's still hanging around a bit.

Another thing that bugged me every so often was song length. A good handful of these tunes clock in between four and five minutes. Coupled with the fact that many of them also happen to be the weaker and more repetitive arrangements, this made for a bit of squirming on my part. Future Crosby arrangers, try to tighten your songs up a bit. Maybe skip the solo section or don't repeat the final chorus.

Finally, I know it has been said before, but I'm not a big fan of the live track to finish the album. While I appreciate the effort to get a more original song on there, the soloist on She is weak, the blend and tuning are rough, and The Exboyfriends did this song a lot better as the final live track on their last album.

All of that said, this album is definitely one of the better collegiate releases on the market right now. I'm being picky because, truth be told, I wanted to like this album more than I did. Keep at it guys, you're on the right track. Next time I expect to be blown away.