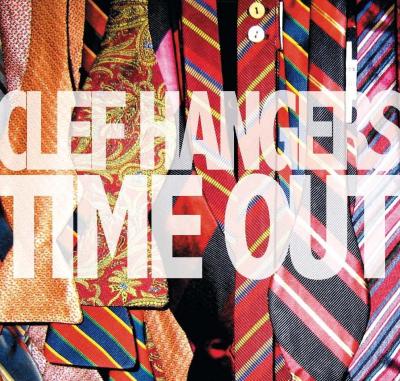 Time Out is one of those albums that bowls you over on first listen. So polished! Such great singers! So shiny!

All of that's true — this is an excellent album. It also loses that first-impression shine on subsequent listens, when the chord changes start to sound digitally imposed and the actual songs start to rise or fall on their own merits. My Love, for example — absolutely brilliant arrangement. There are so many layers here and so many engaging details, like the little "wild eep" accents in the chorus. But is it a good song? Is it a song I want to listen to again and again? Not so much, it turns out, even though I really dig the performance.

Brandon Jackson Baird and Kenji Brantley did almost all of the arranging on Time Out. It's a great body of work, a great collection of songs and interpretations. I have much more mixed feelings about the production. With the disclaimer that I am not an audio engineer in any way, here's my take on why the group's block-chord-heavy style doesn't quite succeed: It doesn't sound like singing. I mean, you can tell they used voices and all, but I get no sense of a line, no sense of a phrase or a breath. Instead, I get a sense that the beginnings and endings of each chord were cropped out, leaving only the big ringing bloom in the middle, which then got digitally spliced back in according to a click track or time sheet. There's no give in these songs. As an arranging device, the block chords work fine, but as presented I think they're getting a raw deal. The worst example is Fix You, where the backgrounds seem to rush the soloist in all but the nifty "tears stream" section at the very, very end. But it's a common problem, and probably the biggest reason why this disc doesn't have lasting appeal that matches its overall quality.

There's a lot of soul in this disc, a lot of different musical directions all handled well. I loved the Journey song, where the uber-shiny digital thing fit perfectly, and the two audacious T.I. tracks that close out the disc. Most everything else is good too. Props to the Clef Hangers for holding it all together, and I look forward to hearing the next one.

Rarely have I come across a CD that simultaneously embodies so much of what I both like and dislike about the state of collegiate a cappella as Time Out from the UNC Clef Hangers. I also can't remember the last time I gave an album an overall "5" and a "3" for innovation/creativity so, clearly, I have some 'splainin' to do.

Some of what I like about collegiate a cappella these days:

Some of what I dislike about collegiate a cappella these days (I suspect you'll sense a theme):

Should you buy this CD? Yes. Will you like it? Probably. So much so that you might forget it's a cappella. Don't know if that's such a good thing.

The UNC Clef Hanger's latest album, Time Out is worth the purchase price. Like most collegiate albums, it contains an eclectic mix of covers ranging from Michael Buble's Feeling Good to Rascal Flatt's What Hurts The Most. It also contains some of the typical tracks that seem to be circulating in the a cappella world: Coldplay's Fix You and Muse's Time Is Running Out. While their song choices may not be unique, they are definitely familiar and crowd-pleasing.

What is unique about these guys is their rich arrangements, tight harmonies, good soloists, and two really good soloists — Anoop Desai and Chris Melly, who each turn in three solos on a thirteen-track album. Either one of these guys could easily represent the a cappella world well on the next American Idol, and Anoop may be joining Greg Binstock in the realm of my favorite a cappella tenors.

Time Out closes out with two rap tracks originally by T.I., an artist, that, I admit, I only know from a Chevy commercial. While I'm normally skeptical of a cappella boys rapping, I was very impressed with the skills (skillz?) of the two Andrews (Simpson and Barker).

I do wish the insert had a bigger picture of the group instead of eleven tiny shots crammed together on one side, which include some group photos, some individual photos, and an inexplicable photo of the ocean and a mostly empty pitcher with two full tumblers of what looks to be sangria. Well, that is what the "members" page of a website is for, I guess.

Anyway, the first sentence of my review is the most important one, so I'll repeat it here: The UNC Clef Hanger's latest album, Time Out is worth the purchase price.