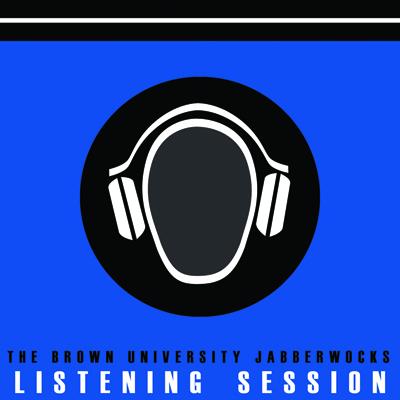 Listening Session feels more like an a cappella training run than a full-fledged project. The Jabberwocks have great voices and enough ideas to get them into the top tier of college a cappella. But this album didn't make it.

So many of these songs sound like experiments — good practice for the group and the arranger, but not ready for prime time. I kept wishing the Jabberwocks had a coach to get them over the hump. Take the bridge to Fix You, an excruciating, bare-bones interlude that centers around a riff of "na-na-na-na-ooh". It's long, it's boring and it draws the ear to every little intonation miss. Likewise, the intro to Don't Let Me Be Misunderstood relies on "rang-tingy-tang-a-rang-tang-a-ringy-tingy", a creative idea that should have been stopped by a reality check somewhere along the way. Tonight, Tonight came closer, but it, too, needed an editor. The verses are great, but the block chords in the chorus weigh it down, and 45 seconds is way too long for an intro. And don't get me started on Sympathy For The Devil. Even if you think it's a good idea to reinvent this snarling rock song as a lounge act — it's not — you shouldn't put it at the front of your disc, to drain out the energy before you even get started.

These conceptual hurdles drag down the album. When an arrangement doesn't quite work, it exposes tuning flaws and other blend issues. Sure, the Jabberwocks could have cleaned up their act, but better material could have gotten them over the hump. Take the two hip-hop tracks, for example. Used 2 Get By is a pretty cool mashup, but the main songs go together, and the beat-boxing breakdown is an audacious experiment that actually kind of works. In contrast, The Seed V 3.0 feels like a collage of fragments that don't connect together and also don't show much internal cohesion.

Bright spots are more fun — look at Blackbird, for example. Sam Carmichael's ensemble arrangement is gorgeous and original. Ok, as a performance it has some tuning issues, but it's such a polished song that it can transcend those kinds of snags. Solos on this disc also stand out — Aaron Powers is stupendous on The Last Time, Jimmy Lowe has exactly the right take for Underground and the rest of them aren't slouches either.

This is a decent disc, and I know it represents years of time and effort. It's just that there's so much talent here. I wanted more.

Gosh, I hate to say what I'm about to say, because I really wanted to like this album. A fantastic track list, savvy and streamlined liner notes, and a group that takes its name from Lewis Carroll. I was expecting something at least semi-thrilling, but sad to say, I feel like Listening Session is almost questioning its listener's intelligence. Who lays down an album like this these days? What self-respecting a cappella enthusiast — or member of this sixty-year-old group, for that matter — would really want this album in their collection?

A bevy of mistakes pervade the disc:

Pitchiness: Even the opening track, Sympathy For The Devil, demonstrates an off-centeredness that is never recovered, and even the soloist loses his notes at the top of his range. The Tenor I part is a sort of hooting sound that doesn't at all replicate the familiar instrumentation of the Rolling Stones song. Fix You tries to play up the background with what's trying to be a slight dissonance, but the pitchiness of the back-up so destroys the chord that it falls into a major key moving in blocks.

Poor blend: One can hear every single voice in Tonight, Tonight's open. I know who's singing "jigga-ja-na-na" and who's on sustained tones. At the first verse, the clip of the VP is not well-integrated, and I'm overly distracted by "doo doo"s that are too strong. Blackbird suffers from audible breath sounds and broken cut-offs.

Boring arrangements: The Seed V 3.0 utilizes an utterly dull "na na na na" and a shriekish "ta, ta-na-na" in its opening, that even with syncopated layering doesn't create any interest. The bass in this piece is the only noticeable "altered" sound on the album, but it's still simplistic. And I don't care if Farewell is a Jabberwocks traditional; it doesn't belong on this album. Four-part harmony that's not spot-on perfect? No thanks. Feeling Good is arranged exactly how one would expect it to sound, with nothing new to report (though it features quite a good muted trumpet sound).

Well-below-average soloists: Where do I begin? Fix You's soloist was either a choir boy in his former life, or else really enjoys singing in the classical style. His falsetto is so perfectionist, so pure — and yet still, so not on pitch — that it's the only thing a listener can focus on. The lead on Don't Let Me Be Misunderstood tries just a little too hard to be a hard-core rocker, and against the unpolished, un-retouched background, the styles just clash.

I have to say, though, that Underground almost delights me — quite a shocking moment — but I fear this may emanate from the cleverness of Ben Folds' lyrics and not from the execution of the a cappella performance. Still, there's a noticeable bit more of energy on this song, with an arrangement that's more glee club than what one might term "modern". On that note, The Last Time is arranged in that so-called modern style, but is still performed with vestiges of that old-school methodology, and that, combined with a decent solo (Aaron Powers), makes this song also noteworthy. Despite Feeling Good's ordinariness, soloist Andrew Marantz also makes an impression. Finally, props to arranger Sam Carmichael for attempting to recreate Blackbird in a new fashion that's not totally off-kilter.

All right, so it's not a total loss, but it's not anything I'm going to even try to persuade you to buy. Too many styles, too many imperfections, and an overall blandness make Listening Session more of a learning experience than anything else. I'd recommend the Jabberwocks stick to one style of arranging (the aforementioned doo-wop/glee club approach) and really work on performance issues that must be achieved before hitting the studio.

If a group is to make an album that is "fun and richly authentic" (as per the liner notes), which I assume means mostly unmixed or unproduced, it must flawlessly execute the a cappella fundamentals which the Jabberwocks do not. I hope the men gather for their own listening session to assess this release and improve their recording for the next time. There's some usable stuff amongst the rubbish which should be evaluated carefully and applied to future Jabberwocks endeavors.

The Brown Jabberwocks' Listening Session represents three years of Jabberwock history, a great deal of potential, and many missed opportunities.

It is difficult for me to understand why any group would go to the trouble of making an album without bothering to clean it up a little, the tools to do so being so readily available these days. The Jabberwocks have made such an album, settling for a mediocre product when it is clear that they possess the talent to do much better. They seem unaware of the immutable fact that albums are for the fans.

The tuning and rhythmic precision on Listening Session are solid by live standards, rough by studio standards. Predictably, the tuning suffers more on the lyrical numbers like Fix You and Blackbird, while the rhythmic precision suffers most on busy tracks like Used 2 Get By and Underground. Vibe is either absent altogether or obscured by the imprecision, most notably on Fix You, though the Jabberwocks are certainly not the only group to fall short on this particular song. Coldplay is all about vibe, and I can count on one elbow the number of Coldplay covers I have heard that achieve it.

The biggest weakness on the album is the rhythm section. The percussion is oftentimes too busy to really groove, the sounds are messy, and the gritty stuff I would expect in a part like the breakdown of the R&B medley is absent. The bass parts are poorly mixed, but the underlying problems are syllable choice and tone. It is difficult to really jam on "doo" and "bah". These outdated syllable choices appear in other parts as well. In terms of tone, the basses just seem to be oversinging throughout — brassy and nasal instead of breathy and resonant.

I feel within my right to be so harsh with this talented group for two reasons: Don't Let Me Be Misunderstood and The Last Time. Solid, creative arrangements by Aaron Powers, excellent solos, and energetic backs give us a glimpse of how good the group actually sounds. A new approach to the studio, including wiser investment of time, talent, and money, would give the Jabberwocks' fans something to rave to all their friends about.