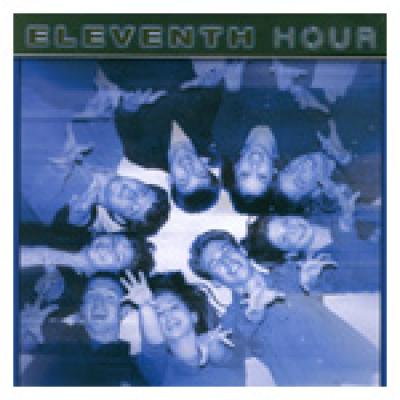 Eleventh Hour is a high school a cappella group, and their eponymous debut album is clearly a labor of love among a very tight-knit group of friends and their choir teacher. Given the amount of work, time, and money involved, it is always impressive when a high school group releases an album, and the members of Eleventh Hour should be applauded for their efforts.

Tossing in their own arrangement was, for a high school group, the equivalent of a college group tossing in an original song. The arrangement for This Love is not bad at all, though it would have been preferable to have at least a few solid block chords to anchor the pitch, letting the moving parts skitter around and across them. This would maintain a nice “wall of sound” and prevent the arrangement from sounding too busy.

But let’s get down to brass tacks.

We are instructed to compare every a cappella album we get against the “general body” of a cappella music. So that means stacking up albums like this one against albums by college, semi-professional and professional groups. And in the comparison, this album is clearly and unavoidably weak. Eleventh Hour is probably aware of this. They are singers. They know there are pitch problems on the album, they know the blend isn’t the greatest, and they know some of the soloists were singing out of their ranges.

But spot-on pitch, seamless blend, and stellar soloists are the trifecta of a cappella. Sure, arrangements make a big difference (with the exception of the group-arranged This Love they were from CASA songbooks or the equivalent), and recording quality does too (this sounds like it was recorded in a large bathroom), but without the trifecta, an album is inevitably going to be weak. Eleventh Hour needs to work on the three fundamentals.

I could not listen to the whole album in one sitting. September sags painfully downward and upward in pitch, and in sections with multiple moving parts, the different voice parts seemed to be in different keys. This is emblematic of the entire album, as there are random moments of going flat and going sharp throughout every single track on the album and in every vocal part, including the soloists. They are a bit more successful with more simple arrangements a la Crazy Little Thing Called Love.

It sounds like Eleventh Hour was recorded the old school way, indeed, the way my former collegiate group did it for our debut album: a bunch of kids standing around a mike or two, doing the song all the way through over and over again and picking the best take. From personal experience, I know it is nigh-impossible to do a perfect take. How many collegiate groups would sound the way they do without singing to a scratch track and doing overdubs (and relying on “studio magic” to fix all problems)?

So, Eleventh Hour, please do not take this review harshly. You worked hard with what you had, and the fact that you even recorded an album at all is an accomplishment. Keep on singing and keep on recording.

Yikes. Okay, let me start with some "yay"'s instead. "Yay" for the cute kids in Eleventh Hour, who apparently come from a quite competitive choral department in their high school. "Yay" for them for getting together to record their very own CD. And "Yay" for them for their nice list of accomplishments. But pity the poor listener — or in this case, RARB reviewer — who has to listen to this off-kilter cacophony of songs recorded a myriad times previously, and uncountable times better.

I wish I could say it's good listening, or even a good lesson, but there's really nothing enjoyable about this album. The arrangements are culled from the Deke Sharon library at CASA, and the first track is the unmistakably familiar Tufts Beelzebubs rendition, but poorly executed with buried lower voices, awful blend, low energy, and no sense of pitch. Sadly, the following six tracks are no better.

Soloists (who are not credited in the liner notes) are of the choir geek variety, those who I imagine might spend a lot of time in the music department singing between different ensembles and starring in the high school musical. The background vocals combine both classical and pop sensibilities in their intonation, creating a weird pitchiness that's never fully resolved, and a clash of tones that never achieve a center. When the soloists perform their leads, it seems they're challenged between these two worlds of trained, proper vocalization and the rock/pop they so desperately want to achieve. Unfortunately, success eludes them.

The one rock star on this album is percussionist Chris Ott, who has a steady beat and nice repertoire of drums, crash cymbals, and high hats. His development and future in a cappella is one to watch for when he enters college.

I shouldn't discredit the kids in Eleventh Hour for being so young, but as an a cappella ensemble who (I assume) are interested in future albums, suitable for distribution beyond Kettering, Ohio, they desperately need some workshops on arranging, performance, and solo technique from outsiders beyond high school. Until then, they'll continue to produce yearbook albums like this one for friends and family only.

As the first album I received as an RARB reviewer, Eleventh Hour's self-titled release holds special significance for me. I remember handing the campus mail worker my package slip, getting back to my dorm room, opening the envelope and loading the CD into my computer. Like a kid in a candy store, I went crazy listening to the album. But I didn't receive the go ahead to review it until five months later. Since then, I've got several reviews under my belt, and sadly Eleventh Hour has not stood the test of time.

I still enjoy the opener, Signed, Sealed, Delivered, but it no longer impresses. As my ear grows accustomed to hunting for tuning mistakes, things I barely noticed on my first listen ballooned into glaring miscues. Eleventh Hour may sing their hearts out the whole way through, but they just can't hold a candle to their more polished, more mature, better recorded, and better mixed contemporaries.

That said, it is awfully hard to completely massacre an album full of Deke Sharon arrangements. The awesome Signed arrangement, coupled with a nice bass performance and mature solo yields a pretty good end product, despite harsh group entrances and a tenor singing at the very edges of his range. The group entrances on the Jackson 5 Medley are better, but the song struggles to stay in time and the male soloist is bothersome.

The promising start of the album gives way to the significantly weaker remainder, signaled by the painful tuning of the first bars of How Sweet It Is (To Be Loved By You). For some reason, Eleventh Hour elected Crazy Little Thing Called Love to be the one song for a male soloist to tackle, and he doesn't have the chops to pull off even a mediocre Freddie Mercury imitation. Add the solo to the poor timing, swallowed syllables, and a comatose bass and the outcome is underwhelming.

Eleventh Hour is saved from complete ruin by the group's energy. Only on the rarest of occasions (see above) does anything seem to drag, though the super-high energy September comes at the cost of good singing. On This Love, before the tuning quits 5/6 of the way through, the group sounds totally at ease and groovy, likely the product of having arranged the song themselves. I would recommend more of that for future albums, because they sound just as good there as on Sharon's arrangements elsewhere.

Though the album may not be impressive, each one of these students, by participating in the arranging and recording process at a young age, is setting him/herself up for success in the music world. The album will eventually be forgotten and replaced by newer releases, the CD will eventually get scratched and skip in car stereos, but the experience for each of these kids will be with them forever, and that may prove to be most important.