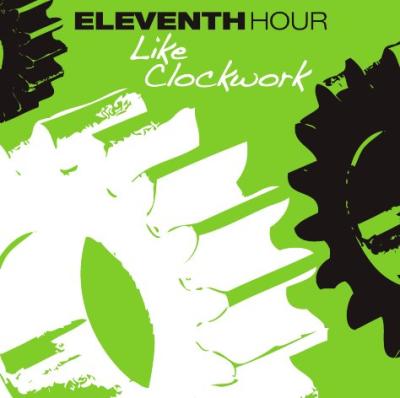 On their latest release Like Clockwork, Eleventh Hour from Kettering Fairmont High School does a lot of things right. They prove that they can make pretty music together on smooth tracks like Lucky, and that they can mix things up with unconventional jazz arranging on tracks like Suddenly I See. They demonstrate solid musicianship, but fall a bit short of real excellence in their attention to detail. The more advanced things like groove and energy need some work. Yes, that's very nitpicky, but Eleventh Hour has proven with this release that they're ready to take those steps to the next level.

First though, there's a lot to be commended on this album. The arrangements are for the most part very creative, and take some tired songs (Suddenly I See, Walk Like an Egyptian) to interesting new places that even many college and professional groups haven't touched. What's more, group members or alumni penned most of the more interesting arrangements. Kudos to Eleventh Hour for their creativity.

Soloists are good as well. Not surprisingly, the women are more consistent than the men, as their voices are more matured for having skipped the big pubescent drop. Brooke Gudgell turns in a particularly nice vocal on September, and Bryan Sharpe shares a nice duet with Kendall Young on Lucky. Their two voices blend well, and it adds a new dimension of professionalism to the track.

Where the group falters most is in the rhythm section. The low voices do a good job of thinking like the bass instruments that they are imitating, and the percussionists' sounds pack punch, but together they're just not always in sync with one another. Right off the bat the main riff of Suddenly I See sounds jerky and never quite settles into the folksy groove of the original. The upper voices try to compensate, but often sound as though they lack energy: a result, I think, of not being quite on the beat. It's strange because most of the percussion sounds edited to be right in tempo. Perhaps it was over-edited.

Overall this is a very good album from a group of young people poised to take over the next generation of collegiate a cappella. I wish them the best of luck as they continue singing, and I would encourage future incarnations of Eleventh Hour to be even pickier about the nuances in their music. Keep having fun, find that groove, and I look forward to even greater things in the future.

Like Clockwork sure starts out with a bang. When I heard the first track, Suddenly I See, I was blown away. Energy! Nice VP! Interesting to listen to! A great soloist! (Kudos to Bethany Magee.) All this from a high school group! Wow. Unfortunately, the rest of the album doesn't quite maintain that same standard. It's just average. But to be considered average among the larger a cappella community should be thought of as a nice accomplishment for these high schoolers.

The album tends to fall flat in the arrangements. Aside from Suddenly I See, there is only one other moment on the album that makes me smile: a "shave and a haircut" bit inserted into Ring of Fire. One of the weakest aspects of the arrangements is the bass part, which almost always just plods along with quarter notes on the root of the chords. Come on, Fairmont High School, challenge your basses a little more!

Unfortunately, boring arrangements were also a problem on the last Eleventh Hour album I reviewed, evolution. In that review, I wrote: "The worst thing about the album is that overall, the group's sound is just too bland. Most of the arrangements did not sound very challenging or imaginative... Moments with real passion and excitement unfortunately seemed few and far between." I feel the same way. We know that you can sing well, so now show that you can move us emotionally! I know when you have the rate of turnover that high school groups have, it must be difficult to take that next step, but you need to try.

In contrast to evolution, though, the female singers on Like Clockwork sound great nearly everywhere. I already mentioned Bethany Magee above, but Brooke Gudgell also deserves kudos for Hey Sunshine. Brooke sings that song effortlessly, with a nice balance between vibrato and straight singing.

As far as the production is concerned, things generally go well. The songs don't hurt the ear. Parts are balanced nicely, with few exceptions. One thing that turned out strangely, though, was the tone quality of the bass. I'm not sure if this is an issue with the singing or the production, but in many songs the bass sounds like his voice has been run through an audio processor to make him sound like an electric bass, which is fine I suppose, except that a disconcerting wobble gets introduced in the process. Once I noticed that annoying wobble, it was hard to ignore it during the rest of the album.

This has been a lengthy review, so I'll just conclude by congratulating the singers on a nice album. The songs sound great! This is an album you can be proud of.

I know Eleventh Hour is good. They're a group of fantastic vocalists. This is the high school group that covered a Duwende song! So why am I left with an overwhelming feeling of discomfort after listening to their latest work, Like Clockwork?

Inconsistency is a problem on this album. Upper voices and leads have excellent timbre and tone, and blend flawlessly on the slower, Manhattan Transfer-style God Only Knows. Later on Just No Good, the bass singer's heavy vibrato, spanning almost a minor third, is hopelessly distracting. Bethany Magee's CARA-nominated solo is the only thing that keeps the track from being completely unlistenable. (She sings the hell out of that lead!)

Most disappointing is the studio assistance given to this album. With so much potential and raw talent going in, you'd expect a polished album that grooves from start to finish. Groove is the one thing that's missing from most of Like Clockwork. The percussion is often out of time with the backs, particularly the erratic hi-hat in the opener, Suddenly I See.

The trend continues throughout the rest of the album, with background syllables flamming against the percussion, or entering completely out of time with one another. Tuning is similarly spotty, and would have benefited from more aggressive editing. If this was part of a more natural production decision, it should have been carried through the entire album. The result is a collection of tracks that with few exceptions, sounds unfinished.

I'm speaking directly to the members of Eleventh Hour now. Next time around, you should commit to the more natural aesthetic you seem to be going for. You're talented enough to pull it off. Find someone as committed to your style and final product as you are, and your next album will be one for the history books.

To order this or other Eleventh Hour albums, visit acaTunes, iTunes, A-cappella.com, or Fairmont Choirs.