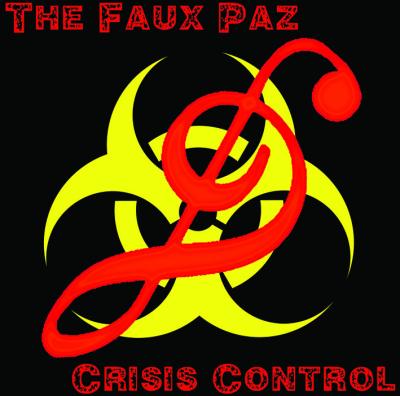 There is a crackle in the air that is palatable. Energy zips overhead as you begin to wonder what the hell is going on. Voices coalesce into a wall of sound that captivates the imagination while tantalizing the eardrums. Disorientation leads to slight panic as you are faced with unfamiliar territory. And then, all is well. Any sort of crisis is under control.

That's exactly how I felt upon first listening to Crisis Control, the latest recording from the University of Maryland Faux Paz. This co-ed group has finally made a whole album that captures the joyous rapture of one of their live performances. The recording has a bit of pop-funk infused through all of the tracks. Even songs that are more rock oriented have a definitive groove. While not quite establishing a Faux Paz sound, the arrangers and performers have accomplished an attributable stamp on the songs. The group definitely makes each tune its own.

The talent is present in all aspects of musicality with great blend and balance between the voices. The arrangements are at once organic, yet interestingly textured — save for the "brr neers guitars" in I'm The Only One (yet I'm without a great suggestion for an alternate syllable). Soloists sing with unbelievable passion and expression. The rhythm section maintains the pocket time after time. The studio work enhances the natural sound of the group (even when the voices are distorted as evidenced in Heaven's A Lie) without creating an artificiality of sound that is so prevalent in other recordings.

Speaking of Heaven's A Lie, I'm completely infatuated with Lauren Levine's gift. She grabs a hold of the melody line in this song to create a very emotionally vulnerable place without sounding screechy or like she's screaming. She renders such an honest outpouring of frustration and anger that it left me breathless. Some of the ladies are angry ... Amanda Jabes' performance on the Jem cover 24 is just as aggressive as Levine's. In fact, each soloist gave a bit of themselves to their tracks — well, at least the women do. There are a few tracks where the guys do a lot of resting but still provide a solid performance. So it's very hard to find fault with much.

Fix You is blessed by a glorious background, ethereal when necessary and pointed in moments when the emotional arc most needs it. David Lipsitz's arrangement creates this natural crescendo line at the start of the bridge that builds into a great tension that releases at the end like a sigh of relief. This bridge is one of the most authentic expressions of the original that I've heard. Arrangers Dave Gradin and Jimmy Leathers use the song's natural build effectively in the bridge to All These Things That I've Done where they layer each vocal section on the line: "I've got soul, but I'm not a soldier". The first soprano line explodes the final phrase with just the right amount of punch, a quality that I've missed in the other recordings of this song.

A song that I hate and which murders me is, unfortunately, also the most intriguing one. I'm really done with Rhianna's Unfaithful. It's pretty much a joke of a song, but I know that the kiddies are still eatin' it up across the country. And no wonder: the Faux Paz's version is actually tuneful and less of a caricatured soap opera than the original. Several times, certain vocal motifs harken to other songs in an ominous fashion. I'm still listening and trying to discern where all of the roads lead.

It would be a terrible crisis if you didn't pick up the newest album by The Faux Paz.

The crisis is definitely controlled. In a more than welcome move from For Lack of a Better Word, The Faux Paz have relocated their recording and mixing operation from campus space to James Gammon's domain. Gone are the risers and two common area mics.

I'm glad to really hear The Faux Paz again, who still offer interesting arrangements and zippy, addicting syllables. I dare say I'm hearing a pleasant signature sound by this fourth album! But it seems like some of the men got left behind in the School of Music's studio (or turned down by Mr. Gammon). The formula of extra-heavy-on-the-young-and-pretty-sounding-girls is almost always the foundation for Crisis Control. In particular, Somewhere Only We Know and How To Save A Life deserve some pulled-out and pining tenor and baritone texture.

Another setback to The Faux Paz's potential is their soloists' tendency to precisely emulate the original artist. We know what Isaac Slade, Adam Levine, and their other Top 40-buddies sound like; we want to hear what you can do with Isaac's and Adam's work. The one soloist who you'll want to give an immediate listen to is 24's Amanda Jabes, whose pipes soar beyond her years. The stand-out track on Crisis Control is Heaven's A Lie, where stellar production, a feisty arrangement, and a talented lead by Lauren Levine come together to make Lacuna Coil's song irresistible.

I'm so glad The Faux Paz gave Crisis Control proper recording and mixing attention. And I'm already anxious to hear their next hits.

Congratulations to the Maryland Faux Paz on a solid release. Better-conceived than three-quarters of the scholastic albums I have heard, Crisis Control is effective and impressive.

Thanks to James Gammon's competent work, the album possesses a firm sonic cohesion start to finish, and all the songs are well-balanced and appropriately mixed.

I find myself fighting the urge to use the word "solid" every other sentence, but it does accurately describe many aspects of this album. The percussion, during the few moments we are allowed to hear Jimmy Leathers in raw form, is great, but otherwise too sampled for my taste. The production is excellent but the editing too obvious. Many abrupt vowel and note changes, tuning artifacts, and some odd consonant timing against the metronomic percussion. The solos verge on excellent, but I still yearn for more genuine personal interpretation, less imitation of the originals.

The arrangements are effective but fall into many of the common pitfalls of collegiate arrangements: static texture, awkward or less-than-intuitive syllable choices, voice-leading mistakes (glaring parallel octaves on How To Save A Life), lengthiness. The arrangers would be well-served to examine The Gammon's production choices — what parts are covered up with effects, what parts soar proudly out of the mix, what parts are louder/softer — and to try to incorporate that sonic judgment into future arrangements. Executing a dirty guitar-ish syllable oneself, rather than relying on a mix engineer to distort a passive "jang" or "joh", while perhaps not always obvious to some listeners, will always increase a track's appeal. As an aside, both Somewhere Only We Know and 24 should have been raised in key. A female lead will never muster the power in that range that a tenor would, and on the latter, it just sounds as if the soloist had more chops than she was able to flaunt in that key.

The Faux Paz did themselves a service with their song selections, most notably 24 and Heaven's A Lie, two songs I had never heard, let alone heard covered. The dissonant female intro in the latter is my favorite moment on the album. The rest are more bread-and-butter choices, but none really bothered me except for Fix You and Unfaithful.

Faux Paz, permit me to ask — did you listen to the lyrics in Unfaithful before deciding to perform it? It is an affront. Honestly, the fact that the arrangement is so solid serves only to exasperate me further. Don't invest your arranging talent in such atrocities. If there is one thing holding vocal music back as a genre, it is the dearth of original material. If there are two, then the second is covers of appalling songs like this one.

There are many nice moments on Crisis Control. Becca Newell's stylish lead on I'm The Only One, the organic vocal percussion fills peppered throughout, the breakdown during All These Things That I've Done, the soprano descant on the Keane cover, the pretty textures on the album's closing track, Other Side Of The World. Heaven's A Lie can hang with the premier co-ed rock covers coming from groups like the Chordials, Off the Beat, and the Harmonics.

If the Faux Paz can take their songs a little bit further before Gammon gets his hands on them, through more creative arranging and more effortful execution, their next album will crack the ranks of the top co-ed groups. Nevertheless, for now Crisis Control will undoubtedly earn the praise and adoration of their fans, friends, and families.