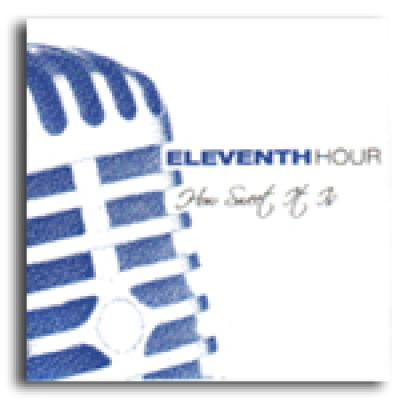 How Sweet It Is, the latest work from the Kettering Fairmont High School Music Department, seems a continuation of the report card for their self-titled Eleventh Hour: A for effort, D for execution.

The voices of Eleventh Hour show promise, but the consistent lack of vocal control betrays just how young these kids are. The more energetic tracks careen all over the place, with individual voices popping out in sloppy entrances, exits,and tempos. The women's vibratos often distract, and the soloists need more time and experience to polish the rough edges on their instruments. I liked Clare Zimmerman's spunk on When Will I Be Loved, although the group should have found better ways to navigate her vocal break. Jack Pohl brings a lyrical, sweet sound to his multiple solos, but falls victim to typical high school chorus diction. Kudos though to Chris Ott and Chris Kulhanek for solid and engaging percussion and bass work respectively.

The group made a few artistic decisions here that don't do them any favors. The majority of Deke Sharon/Anne Raugh arrangements here are spare and simple, leaving the flaws of these still developing voices glaringly exposed. The mix is treble-heavy, further exacerbating the women's vibrato issues and leaving the listener off-balance. And the whole album needs to crank it up a notch on tempos, with ballad and upbeat tracks alike suffering from a pervasive listlessness. These are issues that plague most fledgling collegiate groups as well, and far from insurmountable.

By submitting their album for RARB review, Eleventh Hour must go toe-to-toe with a far older group of peers. Though there's no shame in "not bad for a high school group", they should strive to drop the second half of that moniker next time around.

Let's start this review off with an asterisk: Eleventh Hour is a coed, high school group, and this appears to be its second album.

And there are moments of awesomeness!

For a high school a cappella group, Eleventh Hour is awesome. The group's musical basics are more pleasing than on many college-level albums. Better still, the group and its soloists sing with more energy and style than I've heard from singers so young and used to doing as they're told.

Where Eleventh Hour betrays its youth is in repertoire, technique, and style.

College groups seem to make up their set list as they're performing it. Not so with directed high school choirs. Eleventh Hour sells How Sweet It Is admirably, but I can't help feeling that the song selection must have chafed. Covering artists from Martha and the Vandellas to George Michael, the Nylons to Gloria Estefan, How Sweet It Is clearly has a legacy track list. Deke Sharon's name appears on half the tracks, and the group has self-arranged just one song. I admit that songs like The Wonders's That Thing You Do or even Faith are almost universally fun to sing, but certainly there are lessons these students can learn from a more modern, less "safe" repertoire.

That said, we a cappella singers know well the dangers of modern music; years of instrumental mimicry have left my Latin vowels and classical tone in a horrifying shambles. Eleventh Hour has women worth showcasing — their tone and charisma are remarkable for their age — but one singer is a product of today's pop music stylings. Heard on Dancing In the Streets and When Will I Be Loved, and with cameos through the rest of the album, the group's top soprano sings with that over-tightened, clenched-down vocal cord sound, shuttling her tonal center quickly from back of the throat to mid-mouth. It's a strained and oversung style, begun with Aguilera and now the stylistic tool of choice for so many impressionable young pop stars. When she enters at 1:06 of That Thing You Do, she overpowers the earlier female soloist. Her tonal modulations are attention-grabbing, maybe to a fault. Then again, her passage was stuck in my head for about a week.

The woman singing Good Old Acappella sings with a choral style and the delicacy of someone who needs work on breath support. She's a little nasal on That Thing You Do.

The low alto who takes command of the Faith solo at :52 has a striking tone and style. Her voice is arresting, with a steely undercurrent. Here she's got grit, and she reveals grace on her soul-infused turn during It's Alright.

The alto leading How Sweet It Is (To Be Loved by You) sings with a breezy delivery and authentic soul style that's reminiscent of a ‘70s-era soul singer.

As is typical of younger male singers, the guys of Eleventh Hour have nice voices and not enough personality. They solo with enough energy, but they often miss their melisma and they don't have the technique or style to match their female counterparts. But give 'em time and the ones who love singing will prove it.

As a group, Eleventh Hour has rehearsed some sections harder than others. It's noticeable because their following sections can sound shoddy in comparison. Transitions out of choruses, for example, lose much of the impact the group has earned because they can't power out of them cleanly. Soloists keep the tempo nicely, but the backgrounds occasionally float around the beat. The vp is live tracked and mostly rudimentary, with too many instances of plosives off the mic. The bass singer's syllables need modernization to get out of the old school, especially on the more modern pop songs. The group's tonal blend works fine, but there are instances of drastic imbalance when one voice part surges over others.

When all is said and done, I'll pay a compliment to Eleventh Hour that I don't give to many college groups: I expect to keep several of these tracks in my a cappella rotation. College groups and a cappella fans: watch for these singers. More singing will hone their technique and more time will extend their style. Then sign me up for the ten year reunion album.

Eleventh Hour, a high school septet out of Kettering, Ohio, is a select ensemble from the Kettering Fairmont music department. There is no doubt in my mind these student singers are the best a cappella singers in their school, and possibly even the state of Ohio (their liner notes indicate they've presented at the Ohio Music Education State Conference, a big honor in the education world). Recently landing the opening track on the 2008 BOHSA compilation, these high school singers are certainly a force to be reckoned with in the high school arena. Add to this the fact the group looks like they just stepped out of an Abercrombie & Fitch commercial and you can imagine the scene at their home school and within their community for performances. In the a cappella scene at large, however, they come up lacking in several categories including repertoire choice, energy, and solo technique.

Almost every scholastic group begins with classic a cappella stand-bys. The reason? They're readily available for purchase of sheet music, learning CDs, and recordings of the artists's performances the arrangements are based on. These arrangements have been replicated so many times because of the energy and overall fun factor brought to the songs by artists such as The Nylons and others. I have a sneaking suspicion Eleventh Hour hasn't heard the versions which made these arrangements popular; either that or they just don't like them. Good Old Acappella and It's Alright might just be the most lethargic and uninspiring versions of the songs I've heard. It almost sounds as if the tracks were purposely slowed down in the studio. That scenario aside, these tracks need a redo where these singers go back into the studio and actually have fun with these standards. May I suggest a smile and a visit to the local Starbucks? Perhaps a DVD of The Nylons performing?

And then we arrive at track five, Unwritten (an original arrangement penned by the group), and it's as if a completely different group takes over the studio. Morgan Shope delivers a powerful solo and the rest of Eleventh Hour follows suit with the caffeine shot needed in earlier tracks. The highlight of the album (and the point when the group is at their best) is on the Mach 1 arrangement of The Dixie Chicks' Ready to Run. The lyrics state, " … all I wanna do is have some fun" and Eleventh Hour finally delivers on that promise.

The leads throughout the album are predominantly female and sometimes come out a bit strained, with the ladies using their throat muscles instead of air to drive their sound. Sometimes high school-aged singers are not ready to mimic and perform the highly stylized sound heard from today's recordings artists; sometimes it's better to be yourself than try to become someone else or replicate a certain sound/style. I could have stood to hear more of Jack Pohl, whose smooth sound is a lock on the laid back Wonderful Tonight and '50s pop tune, That Thing You Do. Bass Chris Kulhanek should be sought after and recruited by any collegiate group within a 500 mile radius. He's accurate and booming at the same time (traits that don't usually go hand in hand with basses).

The final track, Beat Box Battle is a fun travel through several different styles of vocal percussion and beat boxing including many of the organic and drum kit sounds contemporary a cappella has come to know and enjoy. Novice and experienced VP/beatbox performers alike may want to check this track out just for the variety of sounds produced. While the battle occasionally starts to run away from the performers, they keep it lighthearted and fun to the end.

Scholastic groups under ten members are becoming less and less frequent these days, and I give Eleventh Hour full credit for attempting what many flinch at. Small groups expose every mistake, and put exponentially more responsibility on each singer's shoulders to deliver. There are college groups out there who couldn't hack it with less than twelve singers, a compliment Eleventh Hour should take to heart and let continue to drive their passion for great performances. These kids can blend and are very musical, attributable to their director, Brody McDonald. I would encourage Eleventh Hour to continue writing their own arrangements and outsourcing for arrangements written specifically for them as it's the only way to really take advantage of their strengths. Aside from fans and music teachers looking to put a group like this together, take a pass on How Sweet It Is as I have little doubt their next release will be much sweeter.