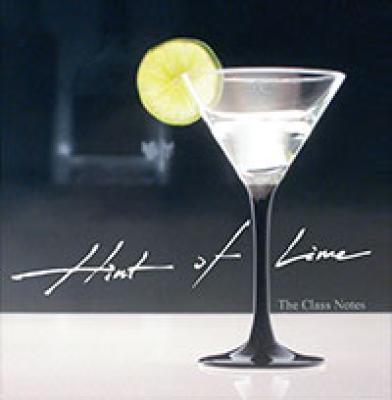 Hmm … it's not lime. I can't quite place it … Wait …of course! I've got it! It's studio magic — and lots of it. Hint of Lime is unconvincing. The album relies heavily on intrusive mixing to bring it up to a reasonably good standard, but discerning listeners will detect the hallmarks of a group that needs work.

The album's final track, Only You, reveals the extent of studio effort needed to render Hint of Lime palatable. This track sounds hollow, thin, and airy without studio eq on the bass or percussion. The soloist has a big, Peter Gabriel/Gabe Mann voice, but his female harmonist sounds bland by comparison. Their tonal differences are irreconcilable and their timing is off from one another. The Spanish language passage is clunky and both singers sharp on "obsessionado".

So the Classnotes must have needed the help, but some of the mixing is truly distracting. Most irritating is soloist melisma that sounds drawn in. It's aggravating to hear these auto-tuned illustrations on runs (Where You Are, Stuck).

The entire group sounds squashed through a rack of compressors, harmonizers, and aural exciters. Some albums gleam under such a polishing, but Hint of Lime sounds artificially busy and occasionally scrubbed raw. The widespread "oh" and "nah" choruses and bridge of In This Life are shimmerized and then run through some vaguely astral-plane harmonizer (and parts of Stuck). This illusory veneer adds motion to a relatively static background, but the choice of processing sounds canned.

The album's vocal percussion is heavily machined and sounds fake at times. The ride cymbals of the album opener, Where You Are, are slushy. The shaker and woodblock in the bridge of In This Life sound hokey. "Doove doove" tom toms in Sea Breeze are amateurish. Though still processed, the more organic original drum noises of Black Horse and The Cherry Tree comprise the best use of vp on the album, adding energy to drive the song forward without distracting.

Thankfully, good songs, spirited soloists, and dynamic arrangements make these flaws somewhat forgivable. The album is made of likable and interesting pop/rock music with a splash of soul and crossover country.

The Classnotes are stacked with solo talent, making it tough to pick favorites. The soloist on Put Your Records On is perfect for the song, with a soulful style, good energy, and great tonal variation throughout her range, just like the original artist. Black Horse and The Cherry Tree and Something to Talk About are fun songs with lively soloists who give their songs an honest, energetic turn. The women leading In This Life, Stuck, and Torn sound sincere. The guys leading Sunday Morning and Where You Are have great voices that capture the style demanded of these songs.

Backing voices support these strong solo performances with energy and motion. Most arrangements build nicely, and the Classnotes are conscientious about sonic variety from verse to verse and chorus to chorus. The group is maybe tempted to overuse super high, sustained pitches to build tension, but it works when employed. The group is adept at rhythm, understanding backbeats in songs like Where You Are and Put Your Records On and downbeats on Black Horse and The Cherry Tree.

Hint of Lime is entertaining despite its technical distractions, but the album could have been improved through better singing technique and mixing that wasn't forced to trade off authenticity for flashiness.

Cornell's Class Notes, with the help of James Cannon and Bill Hare, have put together a solid album.

The album's strengths are clear — production, percussion, and cohesion — the result of some savvy decision-making by the Class Notes. The weaknesses relate to the other end of the microphone — song selections, syllable choices, and assignments of leads.

The album boasts top-notch mixing and mastering throughout. Everything in its place, creative sonic additions to the arrangements, heavy-hitting bass and percussion. The production prowess of James Cannon shines through in many of the songs, though more through the percussion than through the studio performances, as I would normally expect from him. Some of the background parts tend toward rigidity and zombie-ness. The percussion, on the other hand, is awesome.

Where You Are, Black Horse, Stuck, and Sunday Morning display some of the most innovative and fun percussion I have heard in a cappella. Mr. Cannon is clearly the best in the collegiate business with vocal percussion. The creative, cool sounds and engaging sequencing are far ahead of the pack.

Editing, mainly over-tuning, is the only persistent weakness in the production, both on the leads and on the backs. There is some inexcusably severe click bleed at the beginning of Look After You.

The track list falls a bit short, seven of the tracks having been covered more compellingly by other groups. My favorite songs are Sea Breeze, which I had never heard, and Put Your Records On, which I had never heard covered a cappella. The arrangements range from solid (Why I Love You (You Are My Joy), a song I was fully prepared to hate) to average (most of them) to distracting (Where You Are, Something to Talk About, Torn). Where You Are and Torn are simply too busy. The former thins out nicely in the second verse, but the relief is short lived. Something to Talk About is much too slow, and the syllables are rather awkward, the most glaring of which is the completely naked "ba da din doh" at 2:20. Moments like that one reinforce the idea of a cappella covers being nothing more than a novelty.

Most of the female leads sound nice, but relatively adolescent. Nellie Thompson stood out with a convincing lead on Torn and some excellent harmony throughout. In general, I just wanted more woman, less girl. The male leads are mostly strong, and Phillip Torres's lead on Sea Breeze is sickeningly good.

The inclusion of the live track as the album's closer is puzzling. The main reason to include a live track is usually to capture the energy of a group's performance, but Only You is not an upbeat song, and the group takes it way too far under tempo.

The Class Notes will need to shift some focus back to the front end of the musical process — song selection and arranging — if they want to kick their next album up a notch. </P

The Cornell Class Notes have released an album. The name of the album is Hint of Lime. To their credit, the album art is appropriately sophisticated and classy. At best, the music is utilitarian and functional. At worst, it is an absolute bore.

The album begins with all the unbridled audacity of beige mini-blinds. A mélange of "ba-da-ba-da bum-bum"s irrigate Marc Broussard's Where You Are. The soloist ably replicates Broussard's nondescript sound. Congratulations, Anderson Clark. What do I say about this? There's nothing particularly wrong with it, and I didn't like it in the slightest.

I could say the same thing about every track. To the extent that Class Notes stray from rote imitation, they veer toward banality. Black Horse and The Cherry Tree strips away what is interesting about the K.T. Tunstall original, and replaces it with hyper-sampled, dull facsimile. Bonnie Raitt's Something to Talk About is accorded similar revision. What once was bluesy, populist fare becomes here a trite love letter to nobody in particular.

The Class Notes also deliver a cover of Natalie Imbruglia's Torn, which merits mention only because it has been rearranged so as to de-emphasize the cathartic climax that made the song a Top 40 hit to begin with. It also features what sounds like a technical glitch early on, which isn't that big of a deal, but is nonetheless audible and emblematic of something, I think.

Hint of Lime has clearly been through the production wringer, and I can't say the production is entirely effective here. We hear a plethora of low rumblings, though I cannot discern the presence of anything resembling a legitimate bass voice. Sunday Morning thumps like a dollar store car speaker in January, but so what? I hear the low, but I don't hear the interesting.

The soloists on the album seem to be enjoying themselves, and for that reason I can cut the album some slack. The men take full advantage of the latest trend toward breathy lead-singing, but so do the artists they are covering. Teraj Allen stands out with a solid (if a tad preening) rendition of Why I Love You (You Are My Joy), and the women have the chops (if not the moxy) for the difficult solos they take on.

The album concludes with an incoherent version of Only You, as performed by Yazoo, and as channeled by the Flying Pickets. It is an interesting nod to history, but exemplifies the problem with the album. Aside from the curious Spanish interlude, the song is a muddled derivative of the original. The Class Notes do nothing to introduce their own soul to the mix or the song.

That is par for the course on Hint of Lime. Rather than make their own musical statement, with all the nuance implied by the title and classy cover art, they have settled for the vocal equivalent of limeade. Alas, this tonic is drinkable but forgettable.