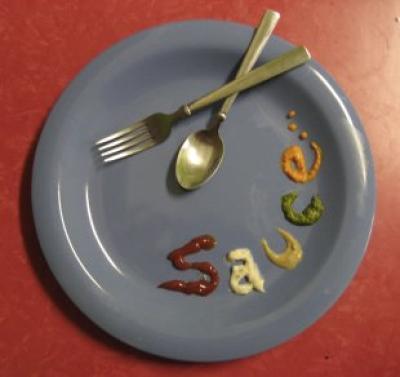 The UVA Sil'hooettes bring the Sauce and so much more to their latest effort. Their choice of repertoire alone sets this all-female a cappella group apart from the rest, with only a few "typical" choices (Dido, Imogen Heap) scattered in with songs from Muse, Jonatha Brooke, and Ciara.

The album ebbs and flows between being a very good release and a fantastic one. The shortcomings are with a few of the soloists, such as Christina Vignaud on God is a DJ: it's an up-tempo song that falls short when Vignaud can't seem to sustain the notes and higher pitches. In the grand scheme of a cappella, she is still a strong soloist, but only average compared to fellow Sil'hooette soloists Sara Dougadir, Caitlin Morton, and Lexi Witman. Other soloists have great voices, like Jenna Pastuszek who, however, sounded a bit too Broadway-esque for the haunting Careful What You Wish For. The one song that left me truly puzzled was Somebody To Love. It stuck out from the other alternative-pop song choices and didn't add anything to the overall track listing, as if it were performed by a group with a completely different set of criteria when picking songs.

Sara Dougadir is a fantastic arranger, using great balance of syllables intertwined with grabbing lyrics from the solos. Olivia Bloom is also a strong arranger, though not as creative with numbers of parts or layering. James Gammon mixed and mastered everything with excellent technical precision, but at times I was left feeling like the emotion was taken out of the background voices to accommodate cut-offs, pitch correction and dropping the octave for the lowest voices. It's sometimes hard to tell how talented these women are versus how talented James Gammon is.

There were several tracks that stood out from the rest because of brilliant arrangements and emotion-filled soloists. Butterflies and Hurricanes has an intensity in the arrangement that is blown out of the water with passion by soloist Sara Dougadir. It's an in-your-face song that has stayed on repeat for quite some time. The original Dance With Me, sung by composer Lexi Witman, was performed with a seduction that seemed only the original artist could sing. Slow Me Down makes great use of arpeggiated chords and minimal production for a lyrical, lovely ballad.

Buy this album for its creative and entertaining track listing, rich arrangements, and mostly fantastic soloists. The Sil'hooettes's album is atypical of the majority of all female releases, which is a good thing, and offer an album full of tasty sauce. The good kind.

I thought the Sils were starting some sort of trend: As the album titles got lamer, so did the music. But with the songs appearing on Sauce (the worst title of the four previous albums yet reviewed by RARB) comes an audio tour de force that repositions the Sil'hooettes of the University of Virginia as one of the top female collegiate groups in recent memory.

Gone is the chick-fare heard elsewhere. Not a trace of Joss Stone, Mariah Carey, or Kelly Clarkson (not to mention Frou Frou, the presence of Imogen Heap notwithstanding) to be found. Rather, the Sils take on a fierce, delightfully demanding repertoire full of bite and sass, and execute an exacting performance on nearly every song. I dig the syncopated background vocals on Like A Boy, and God is a DJ has a neat vocal texture that more than adequately fills the aural space. With albums that have a lot of songs that I've never heard before, I often find myself struggling to really "listen" because I have no baseline, but the songs here are so compelling, the arrangements so inventive that my attention is immediately drawn to the complexities and details. The guitar effects and production values of Walk the Walk are particularly compelling. I even enjoyed Here With Me, the original of which makes me cringe and change the radio station. A solid bass line and the lead's ability to interpret the solo beyond imitation make this Dido song better than the artist's rendition.

The oft-attempted Somebody To Love by Queen is a driven, punctuated piece led by soloist Lauren Craig, who doesn't try to mock the never-duplicated Freddie Mercury, but instead makes an impression in her own right. I'd have liked to hear the trademark glissando down at the end of the song, but it's nevertheless the best rendition I've heard so far. A few of the pieces are inadequately matched to the vocal range of the soloist, but it's not entirely distracting from the overall album performance. For example, the verses of Walk the Walk is a little bit of a low stretch for lead singer Sarah Gulotta, and the chorus seems to be a strain at the top of her chest voice; the word "hey" seems to be a bit thin.

As individuals, the soloists on Sauce are also miles ahead of previous albums. The lyric-driven Dance With Me features Lexi Witman on a strong, powerful lead with lovely color and emotion to her words. And while You'll Think of Me has a moderately low vocal line, it's beautifully executed by Caitlin Morton. (This song also features what I consider one of the Sils's arranging trademarks, the gentle, breathy "dim"s and "doo"s that function to mark the tempo under sustained "ah"s. It's appeared in some of the Sils's most successful previous pieces like Landslide and Where Would You Be.)

The Sils have truly remastered the art of fine album production and deserve each of the five CARA nominations that they've garnered (the most possible for their category) for this latest release. With not a groan-worthy "Oh no, not another one" song to be heard, Sauce demonstrates a keen understanding of the a cappella recording process from song selection through mastering with the musical competence to back up those decisions. Sauce is certainly one album for the keeping.

Sauce!, the latest album from the University of Virginia Sil'hooettes, is a well-produced, well-sung, energetic piece of contemporary female a cappella. From the first notes on the album, you can tell you're in for something special. The harshest criticism I can offer is that the middle part of the album occasionally lacks some of the subtle polish that can distinguish a great album from a truly professional one. Otherwise, I have to congratulate the Sils on releasing one of the best female albums I've had the pleasure of listening to.

Among the things this album does especially well is song order; something that I think people tend to take for granted, especially in the day of the digital download where the importance of the sequence of music has been greatly diminished. The Sil'hooettes begin and end the album with two of their strongest songs; this got my attention quickly and left me with a good taste in my mouth when the listen was over. While the songs in the middle of the album may not be quite as high in quality, they still flow into each other well stylistically. This flow is aided by good production choices that flavor the songs well without destroying the warmth and humanity of the voices.

Ok, time for nitpicking. As much as I liked the energy of this album, I kept finding myself wanting more. From the soloists especially, but also from the middle voices, I just wanted more of an edge in the rock songs and more of a sweetness in the slow songs. Despite the album's strong set list and impressive production values, the lack of gravitas simply left me charmed when I wanted to be blown away.

Part of what bothered my ear was actually the timing and groove of certain soloists. A lot of rhythms sounded rushed and caused some otherwise good musical moments to come off sounding sloppy. I would encourage the Sil'hooettes to pay a little more attention to locking down their groove as they amp up their energy.

Like I said, all I have are the minutest details to mention. Overall this album is excellent, and I would especially recommend it to anyone looking for good examples of the female contemporary sound.