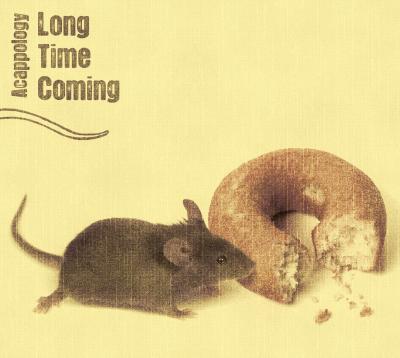 Let me just start off by saying that Acappology gets my vote for cutest mascot ever. The sleeping mouse on the back of this album jacket and on the CD could melt the hardest of hearts. That cuteness coupled with the fact that the appropriately named Long Time Coming took over seven years to complete, and that the group seems so united in the celebration of its release, made this an album that I really wanted to root for. Sadly, though the mouse and the group's message tug at the heartstrings, the music on this album just isn't that good.

As it turns out, more than just being cute, a sleeping mouse is actually a very appropriate image to categorize this group's sound. Listening for the first time, I was struck by how quiet it was. It took me a while to figure out why, but I think this quiet sound is the result of super thin, static arrangements and almost no energy whatsoever. It is, ironically, an apologetic sound. Also, there is very little dynamic contrast to be heard here. Each song starts quiet and stays there. Even the most all-out sections of the big numbers like Beautiful Day barely hit what I would call a "moderate" volume.

Listening to this album you would never be able to guess that Acappology is fourteen members strong. On most tracks I struggled to hear six voices. I wasn't kidding when I said "super thin" arrangements either. Most of the arrangements here are a bass line and either one or two distinct pads of voices, often with the men singing some kind of driving rhythm and the women holding out sustained chords. There is precious little variety, and almost nothing from the studio side of things to add interest.

Production is a strong point of this album, but that's not really saying much. The sound is similar in style to Mixed Nuts, another Liquid 5th production I reviewed recently. It's clean but lacks soul or artistic flair. I've heard L5 work that demonstrates that they are capable of both of those things. I'd like to see them delivering more consistently.

I don't know why this album took so long to be made, but I would suggest to Acappology to streamline the next effort. Maybe it was a case of too many cooks spoiling the broth (I doubt that there's any one person who saw this album through from start to finish), or maybe the older material got stale over the years (recording quality took giant leaps forward in the time this album was in production). Whatever the reason, I think we'll see a much better album from this group when they make a faster and more organized effort to produce one. Until then, Long Time Coming will have to settle for one more consolation award: longest yearbook album ever.

Acappology is a mixed group from North Carolina State University, and well on its way to making a name for itself. Although this is the first time I've heard of Acappology, I have become acquainted with their school through college football. As a Florida State grad, I am fully aware of the N.C. State University football team as they've risen steadily to a quality NCAA football program the last six to eight years, but never quite reaching the elite. Acappology seems to directly mirror their varsity football program by taking a leap towards excellence, yet not fully reaching the Promised Land.

Long Time Coming sounds extremely polished, with production help from Liquid 5th Productions. Although not on par with the top 1% of collegiate recordings currently in the market, Acappology is certainly in the top 5-10%.

The arrangements on this album are all "collaborative efforts of Acappology". It's hard to imagine they would sit down as an entire group and woodshed these arrangements for hours on end, but maybe Acappology gets along so well it's a smooth creative effort. To be certain, the arranging style is linear throughout, and that's not necessarily a bad thing as the arranging is above average. But one negative of such consistent arranging is that sometimes too much of a good thing can get old and tired. There are thirteen tracks but the album feels much longer, a good reason for Acappology to explore different arrangers (maybe some outsourcing) the next time around. I liked Black Balloon, but that's because I like the song to begin with. Ultimately, the arranging doesn't make the listening experience on Long Time Coming, but it doesn't detract either.

The Guster track Demons is a great track in a pool of average to above-average swimmers. Soloists Amy McDonald and Brian Watts are a great match on this song, both giving off the right amount of edge to their voices. Kat Hale's luscious voice on Goodnight and Go is something to really build upon for Acappology. The solo seems perfectly suited for her voice.

The vocal percussion grabs your attention from the start but not in a good way. It sounds as if they were aiming for a drum roll behind Imogen Heap's Goodnight and Go, but it comes across as either a poorly functioning machine gun or a rattlesnake. It's weird and distracting.

Long Time Coming hardly disappoints in quality of sound, but I'm still left wanting a bit more. They're missing the intangibles: a key change at the right moment to lift the song to a new level, interesting rhythmic concepts in the arrangement that change on a dime and keep the listener's attention, or a powerhouse soloist that grips you and saps your emotional energy. I can't pinpoint the exact reason (it may be some or all of the above and more), but the extras just aren't there.

Great production can only take a group so far, and while Acappology has wisely chosen a producer to guide them safely on their journey, they still need to show up for the trip prepared to make great memories. Long Time Coming sounds good but doesn't impress the seasoned a cappella ear. If you're looking for the top 1% of albums, you may need to wait awhile on Acappology. Hopefully N.C. State's Acappology (unlike their football team), will continue the ascension to the front of the pack.

Acappology, a coed group from NC State, has come out with a very good new album. Although Long Time Coming is not terribly innovative, it is well done and has a number of pleasing moments.

Acappology gives quality, in-tune performances with a good balance between soloist and background vocals. To mention three particular examples here: in Cold As Ice the singers brought out the background parts very nicely at the appropriate spots; in Hallelujah I liked the short duet with the female up a sixth singing, "Her beauty in the moonlight overthrew you", and the identical one later in the song; in Black Balloon there is similarly a nice duet at "angels fall without you there".

I felt the added computer effects usually increased the quality and artistry of the songs. For example, Mr. Jones had an interesting guitar sound about three-fourths of the way through. Halfway through Beautiful Day, the singers use kazoo-type voices (I don't know how else to describe it), which I thought were a nice touch. And as long as I'm mentioning those two songs, I should mention that they both also had outstanding soloists. The soloist on Mr. Jones did a great job maintaining free rhythms over the more structured background vocals. Beautiful Day was probably my favorite song on the entire album. The way it followed Be Ye Glad, though, was kind of odd; Glad would have been a better choice for a closing song. Another random production observation: I really enjoyed the transition between Mama's Room and Demons. There was almost no break, and I had to double check to see if my CD player was on a different track.

One exception to the overall production quality was Goodnight and Go. I didn't have a problem with the blatant auto-tuning of the soloist, which I suppose was done to match the style of the original song. But I disliked the drum beats. They sounded as if they had been artificially "enhanced": like a single drum beat was recorded, manipulated, and used for all successive drum beats.

To conclude this review, I had heard four songs from Long Time Coming recorded by other collegiate a cappella groups, so I decided to listen to them all back-to-back for comparison. For the benefit of others who might be familiar with the other versions, here's how my comparison turned out.

In short, Long Time Coming holds its own in some good company and was a lot of fun to listen to.