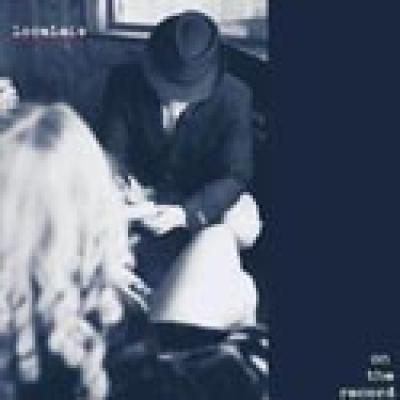 If you're in the mood for introspection, or if you'd like to obsess over a lover, or just have yourself a good cry for no reason other than life's bittersweet ennui, you'll find opportunities abound on the Loreleis' latest.

On The Record is an aca-chick-flick set to music. Six gentle ballads. And then, for spice: one rock ballad (Peace of Mind); one slow rocker/power ballad (Magic Man); one R&B up-tempo (We Ride) that sounds like a very different group, but is nonetheless deftly arranged; one (perhaps obligatory) Gwen Stefani number (Sunday Morning); one mid-tempo, belty blues tune (Both Sides of the Gun); and one stunningly creative, ethereal art rock piece (In the Backseat) that stands head and shoulders above the rest. Feminine to the core, there's much to enjoy in this sisterhood of the traveling pitch-pipes.

The Loreleis display real artistry in their arranging. It's not that the leads aren't strong; they are. It's not that the production isn't sound; it is. But while textured arranging is commonplace in collegiate a cappella, the Loreleis are especially adept at achieving richness without busyness. Though they often choose standard fare as subject matter, they paint with distinctive brush strokes. Gentle descants add a haunting quality to several songs. Distorted vocals are regularly called on for drive, but they are still complemented by more dulcet tones. A few moments of operatic heavenly choir are simply stunning. Soft dentalizations but precise rhythms make We Ride's backups pop. Apologize feathers electronic synthesizer sounds in with smooth vocal pads, harmonized lyrics and faux operatic lines. The Loreleis' arranging is notably superior to many collegiate groups who rely on simple instrumental imitation in the studio. The power of the studio is there, but the voices remain.

Every arranging trick is brought to bear on In the Backseat — and to perfect effect. The heady but powerful lead floats above a nearly mystical sound that gives way to an overdriven chorus which suddenly disappears to be replaced by a quivering angelic choir. Drums are added and removed to emotional effect. Bird noises, squeaks and whispers all make an appearance. It's quite a journey.

There are a few throwbacks to the goofy "jen jos" of the early aughts (Peace of Mind and, to a lesser degree, Sunday Morning), a minor bobble in an otherwise sophisticated arranging palette.

Overall, troubles are few and far between on this release. The Loreleis' biggest issue is their overall energy. Individually, the songs are fine, but the net result is a wall of ballad. If each ballad had been programmed between two or three up-tempos, the ballads would have shone as special moments. For some, that alone means the CD will solve a bout of insomnia. For many others, On The Record will nonetheless remain a solid offering with a few moments of pure aural delight.

When last I listened to the Loreleis — on the 2006 release Downstairs — my biggest beef was that their arrangements were one-trick wonders, with terrific grooves, but without any development beyond the first verse-chorus.

I suppose, then, that the whole must be greater than the sum of its parts because while the same problem plagues their 2008 release On The Record as well, the overall album is undeniably excellent and some of the best all-female a cappella I've heard.

That which you've come to expect from the ‘leis is still there in spades: big, full, energetic, well-tuned ensemble sound, embellished by the studio wizardry of Dave Sperandio. Sampled VP and octaved bass are becoming (or perhaps are already) the norm in collegiate a cappella, and the ‘leis use them liberally and to great effect, though occasionally (Sunday Morning) some of the drum patterns are so fast and/or complex that they can be distracting in their super-humanness. Solos are first-rate across the board, with particular props to Jillian Bauman for her power and attitude on Magic Man and her touch and sensitivity on In the Backseat. Repertoire was a little eclectic for my particular tastes but nevertheless enjoyable. While the majority of the source material is still female in nature, it was nice to see the group show some range by including at least a few covers of male artists as well.

Would that I didn't have to qualify my review any further — as I truly dug this CD — but the arrangements need to be called out for their lack of creative development. This should not be confused with a lack of complexity, as most of the arranging work showcased here displays good voicing and skillful texturing. But it seems almost as if the group's arrangers fall so in love with their opening "groove" that they feel no need to develop it beyond its opening statement. On many an occasion, the first minute of the song (Magic Man, We Ride, Peace of Mind, O Sailor) is brilliantly realized, only to repeat ad nauseum with little in the way of variation or any sort of build. Ironically, some of the blame may indirectly fall on Sperandio for his remarkable studio work making the opening "licks" sound so fantastic, who would want to mess with them? Unfortunately, by minute three of most songs, I was dying for something that wasn't the same syllabic or harmonic or percussive pattern that I'd been hearing for the previous two. That's why the bulk of the individual tracks only merited 4's for me.

And yet, individual track scores notwithstanding, and unlike the multi-CARA-nominated Downstairs, which I scored a "4", I'm giving On The Record a "5" overall. It's a close call, but whereas the flaws of the former were too ever-present to be ignored, the overall listening experience and enjoyment of the latter work rendered its flaws far less bothersome. On The Record demonstrates why the the Loreleis are already considered one of the best all-female groups in the country. With a little more work on the arranging front, they have the potential to be the undisputable #1. Then again, is anything "undisputable" in the a cappella community? As the kids say, "LOL".

Having seen the Loreleis perform live several times, I can easily say that they have, consistently, some of the best vocal talent of any collegiate singing group. Their uniformly high-level energy and performance ability makes for an entertaining show.

Sometimes, groups have trouble translating those assets into a studio project, often faulted by their arrangements or production choices. The Loreleis' newest album, while showcasing excellent singing on both backs and leads, falls squarely into the former category.

The production team — Kat Linker (a former Lorelei) and Dave Sperandio — does a great job putting the songs together. The editing is excellent, with very few blatant editing artifacts, and the mixing gestures work well with artistic direction of the album.

Much of the more aggressive mixing occurs when the arrangements fall short, awkward or inappropriate syllables providing the most common offense. The opening track, Magic Man, boasts an awesomely unbridled lead, but the "ji-bo-bo" backing syllable that serves as the staple vamp makes it difficult to take the song seriously. In this, and in several other instances, Dio mixes more forcefully to cover up arranging missteps, with varying degrees of success. The soulful Both Sides of the Gun begs for a funky, rhythmically diverse arrangement, but the bland "ba" syllable on its static rhythm falls far short of supporting the powerful lead. On Not Ready to Make Nice, the climax is delivered by awkward "ve ve ve ve ve shuh ve" hits that squander the accreted emotion and energy of the song leading up to that point.

The tracks that really succeed combine appropriate syllables and backing melodies with slam-dunk mixing. First, the hip hop tracks — Apologize (despite being a very lame song) and We Ride — sound excellent. The key of the former needs to be raised by a step or three, but overall both arrangements really cooperate with where their mixes needs to go. Next, while I admit that I am a sucker for Fiona Apple, I think it is hard to deny the sexiness of the backs and lead on O Sailor. Finally (and unexpectedly) the track that resonates the most for me is the simple and transparent One Moment More. Amanda Bolch delivers an emotional lead, and the arrangement is appropriately effective.

Several of the tracks are too long — Apologize needs a few sections cut out, Back to Black just doesn't go anywhere, and In the Backseat's outro has a lot of excess material. Raising the key in Apologize, In the Rough, and Peace of Mind would lend some tension and thus believability to the leads. The Peace of Mind arrangement in particular needs more space. The bridge of Magic Man and the chorus of In the Backseat hurt my ears.

Overall, my favorite moments are the ones free of arbitrary syllables, with either a super effortful lead (Magic Man, In the Backseat, One Moment More, Both Sides of the Gun) or really sexy or creepy or otherwise entrancing backing melodies (O Sailor, the post-chorus of In the Backseat).