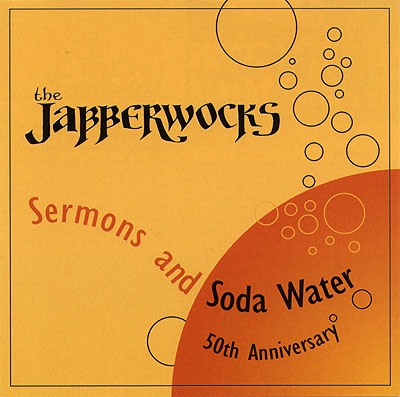 Take any Jabberwock singing a solo and he sounds pretty good. Get more than 5 of them singing at the same time, and the results go downhill fast.

Backgrounds are the issue. Poorly tuned, poorly timed, blurry all over. Makes you want to roll your eyes at yet another guy group album - you know, it's got the Nylons cover, the Clapton song, the Billy Joel song, all the usual accoutrements.

It's too bad, because most of the soloists sound like they just need a good setup so they can shine. As it is, none of them really stands out, but they all seem to get what they're singing and they are mostly pretty good.

The interesting part of this album is in the middle, if you can get past the tuning and blurriness issues. Ebony and Ivory is convincingly sung by Mark Manning and Sean Kumar, Glory Days has energy, and Gordon Wright sounds great on the lead in Tempted. Tom Balamaci's intro to Volare is terrific, but the background sinks the rest of the song.

The best track is the Lionel Richie cover — go figure. Its light movement seems to get the guys thinking along the right lines. Party. Fiesta. Maybe not forever, but nice enough for now. Like most of the song choices, All Night Long shows that the Jabberwocks are looking for tunes to the side of the beaten path. Unlike most of the others, they use it to back off, hear themselves and let the chords tighten up.

The message from this album is that you have to listen to each other if you want to have a good a cappella group. Nice solo voices just aren't enough.

The Jabberwocks get their name from a Lewis Caroll poem. Their new CD, Sermons and Soda Water, gets its name from a Lord Byron poem. Therefore, logic dictates that I write my review in the form of a sonnet. Okay, maybe it isn't logical, but I'm going to do it anyway:

Ode to an A Cappella Group

The latest and greatest CD from the Jabberwocks
Has an enjoyable, old school flavor.
There's a cool guest appearance by the Chattertocks.
(Maybe the boys should return the favor.)
Glory Days' arrangement by Tom Jackoboice
Has a pure-and-simple sound that's a perfect fit!
So, despite a soloist (or two) with a strained voice,
This disc is better than their last (Woonsocket).

I especially liked their version of Volare.
The arrangement is hearty and the solo is strong.
Their Marvin Gaye song is one of life's simple joys.
However, although the singing was on par, they
Ought to stop singing that damned Farewell Song!
And why are they obsessed with Me and the Boys?

The high point of the album is the brash, high-energy rendition of the Gipsy Kings' Volare. All of the parts come together here — a soloist who completely captures the feel of the song, an arrangement that's neither too busy nor too simple, percussion that works. Other moments of note are Send Me On My Way, which doesn't approach the complexity of the Rusted Root original (especially in the percussion) but does a pretty good a cappella job of it, and any track where Sean Kumar sings a solo (tracks 3, 5, 8, and 12). On most of the other songs I find one or another of the elements lacking, though fortunately there are no real clunkers on the CD.

I give the Jabberwocks credit for a cool song choice for the Indigo Girls' Love Will Come to You, but in an album of generally above average soloists, this track has someone who's breathy and straying out of range on the high notes during the chorus. Overall, percussion on the album could use some work - sometimes it's too busy and hissy, other times it just falls short of a groove. Some of the arrangements strike the balance between variety and a clear focus (Ribbon in the Sky, When We Dance), but others seem to go for complexity only to come off as just busy (All Night Long, Love Will Come to You).

The album finishes up with an energetic collaboration with the Chattertocks on You're All I Need to Get By, and the Traditional Brown number, Farewell Song. Overall, while there are a few standout moments on the CD, and the group does have a pretty good handle on the singing part of the a cappella experience, there's not much (other than Volare) on this disc that you can't find anywhere else.

The Jabberwocks are all about potential. Had this album come out ten or fifteen years ago, it would have been far more impressive. As it is, I was a little disappointed. The word "almost" comes to mind a lot. I wanted to rate songs higher, but I just couldn't. Most of the songs have a lot of solid elements: sometimes the soloists, sometimes the energy, whatever. But in the end, most tracks leave something to be desired. I was never able to really sit back and enjoy this album without being jarred by details that were simply left unattended. What Sermons and Soda Water needed more than anything is a stronger producer.

Solos range from relatively impressive to slightly weak. To be fair, they tend to lean significantly towards the good side. But like everything else on the album, inconsistency is the Jabberwocks' plague. Back-ups are often choppy, unmusical, uncreative or inappropriate.

On this review, more than any other, I have had great difficulty rating the songs. Sometimes one element is simply fantastic while other elements are bad enough to detract significantly. I have tried to give overall scores, but I feel bad giving average ratings to songs with terrific soloists. As an example, the VP is very badly produced throughout, as are the basses. Add some bad mixing and you turn talented solos, and talented singers into some very mediocre ratings.

The casual listener may be able to enjoy this album despite its flaws; I had trouble.

Almost. That's the word I can comfortably use to summarize my review for the Jabberwocks. They get a "5" with hesitation for some reasons. There are slight problems on a few songs: the occasional slip with tempo (Love Will Come to You), tuning is a bit sour on some chords in Tempted, and so on. I won't list every minute detail that irked me, but overall this is a wonderful album for any a cappella listener, unless you are motivated by intricate, difficult arrangements and dazzling dynamics (both of which aren't a frequent appearance on Sermons and Soda Water).

What I really appreciate about the Jabberwocks is that they do not fall into the common a cappella trap of allowing one voice part to stick out like a sore thumb. One cannot tell from the recording if it's great mixing, or that the group blends well, but in either case it proves for a warm, rich sound on nearly every song.

None of these arrangements are mind-blowing; many of them consist of moving chords and switching vowels. Most of the percussive effects are left to the percussion on the songs, which means that there isn't enough intricate play between voice parts. I gave the album an overall "5" but the score doesn't reflect the creativity; yet it didn't warrant dropping them down to a "4" either.

Sean and Gordon blend "like butter" on Change the World and, other than a few minor tempo slips, it's a great tune. The other soloists are very strong as well, but considering Sean's got 4 solos, he's definitely the best to listen to.

When you purchase this album (not "if" you do), jump right to Volare by the Gipsy Kings. Original, full of rhythm-driving syncopation, and it's a "5" for repeat listenability. In fact, if you like that song, buy a Gipsy Kings album as well. (I recommend the 1988 album that starts with Bamboleo.)

I'm anxious for the Jabberwocks' next album, and this one was well worth their effort.