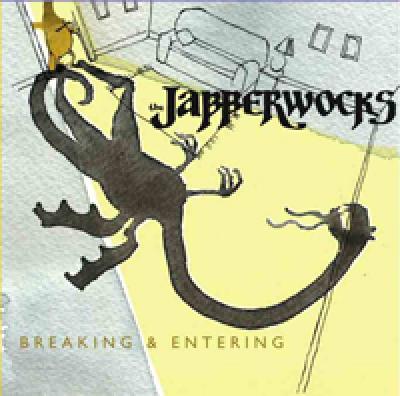 The Jabberwocks sound better when they're loud.

I feel terrible admitting this, like I've just fallen prey to every overcompressed, bump-up-the-volume production trick that's ever greased a primetime TV commercial. But the thing is, it kind of works. When the 'Wocks are mixed down, the blend fragments and they sound like a nice bunch of guys. When the levels go up, the sound coalesces into a band.

For a Top 40 number like Apologize 3.0, loud is just the thing. This track is backed by a nice range of textures from grinding low guitar lines lines to synth boops, and the performance manages to overcome its source material. Likewise, Viva la Vida starts out with distracting syllables and a yummy bass timbre before building into a more completely engaging song. It's not the best Viva la Vida you'll hear this season, but the Jabberwocks put their own stamp on it and deserve full credit.

You Know My Name and Gone sound more fragmented. Gone can be pretty loud, which maybe blows my theory a little. Still, it just doesn't come together for me the way some of the other songs do. Nor does it have the Sunday-afternoon groove of Don't You Worry 'bout a Thing. That song settles into itself wonderfully, thanks to a very sure baritone solo. Higher Ground works too, this time with a great tenor lead. The two Stevie Wonder tracks achieve the locked-in groove that Ain't No Sunshine, while a great song and ably performed, doesn't quite get. Also, Higher Ground deserves extra credit for being a great cut that, in a cappellaland at least, is mercifully more off the beaten path than I Wish or the much-loved Superstition.

Breaking & Entering lets itself out in relatively low-key fashion. Bright Lights and Dance with My Father are both offered as solid adult contemporary fare, followed by the Meat Loaf power ballad. Finally, we bid adieu with the Farewell Song, presented in pleasant and unremarkable fashion. Some day, one of these men's groups will bring us a choral surprise that truly sparkles. Til then, I'll stick with the loud.

Breaking & Entering is all about drama. These guys are apparently saying, "Let's keep outdoing ourselves with bigger, louder, more intense tracks. Go!" And it rocks.

There's a lot of powerful theatrics on this album. I'd Do Anything for Love wins the ribbon for Most Showy, but there's a lot of close seconds. Viva la Vida is plenty exciting with its testosterone drive and cool syllables. You Know My Name is a solid rocker meant for wailing. Apologize 3.0 is thickly melodramatic. And it's hard not to start dancing to the beats of 3-Pain; this is super cool, super tight, this-is-serious hip hop. Adding to the Jabberwocks' coolness is their habit of showcasing basses in their arrangements, a group of spot-on men with enough energy to spare. The Jabberwocks are often so strong and "Take That!" that they're nearly intimidating. That's quite a feat for a recording.

There's also a lot of inspiring works on Breaking & Entering. The Jabberwocks are good at getting your heart racing, and also good at pulling at your heartstrings. You'll clap along with and get behind The World's Greatest. Higher Ground is motivating, too. But you'll certainly need a tissue for Dance with My Father, a Luther Vandross song with a bittersweet story sung by an emotive lead. There's an enormous amount of depth in the Jabberwocks. Apparently being around for sixty years at Brown brings the best talent to your group. You'll enjoy this heritage on Farewell Song, a Brown Traditional with a splash of Lewis Carroll. "Beware the Jabberwock, my son..."

The Jabberwocks are singing their talented hearts out just for you. Breaking & Entering is too good not to own.

Breaking & Entering is a good-to-great album with a few outstanding moments. Let's start with those great moments: the group has two medleys here, each of which is really nicely executed. First, Apologize 3.0 weaves Timbaland/OneRepublic's Apologize with Justin Timberlake's What Goes Around Comes Around and Coldplay's The Scientist. It's a nice touch to join songs based on lyrical themes, and the concept is seamlessly performed: both songs flow effortlessly over Apologize's background, and this fantastic arrangement wouldn't jump out as a medley if you weren't already familiar with the original songs.

The second medley is 3-Pain, which links three songs featuring T-Pain: Chris Brown's Kiss Kiss, Flo Rida's Low, and Baby Bash's Cyclone. Hip hop done a cappella is rarely executed convincingly, but the Jabberwocks pull it off here, complete with some obvious autotuning to replicate the original. Of the three component songs, Low is a little too loungey for me, but the concept and transitions work well on the overall track.

Now, while I do enjoy a good, well-executed medley, thankfully Breaking & Entering doesn't contain more than two. Some of the other, single songs are quite enjoyable as well. Their updated version of Ain't No Sunshine (based on D'Angelo's cover) is haunting and dramatic; they've got a soloist whose voice works beautifully with this interpretation, and they really use dynamics nicely to build an ebb and flow in the (otherwise neverending) "I know, I know, I know" part. Their version of I'd Do Anything For Love is bold and melodramatic; the tempo changes are even more theatrical than the original (if that's possible!), but it's a cheesy song that deserves such cheesy moments (see also: soloist Jason Bertoldi's triumphant bravado on the "sex, drugs, and rock'n'roll" line).

That probably sounds like a heck of a lot of positive praise to heap on an album that I've only rated a four. There are several other really great moments on this album (You Know My Name is a really energetic way to kick things off). But there are plenty of other moments that are just good (Viva la Vida loses some momentum midway through; Dance with My Father is solid but unmemorable) or average (the soloist on Don't You Worry 'bout a Thing sounds shaky, and the arrangement is not as creative as these guys are so obviously capable of). Still, the great moments give me more than enough reason to return to this disc again in the future, and most importantly, they've taken a wide range of song genres and pulled them together into a remarkably cohesive whole — which is harder to do than it might seem.