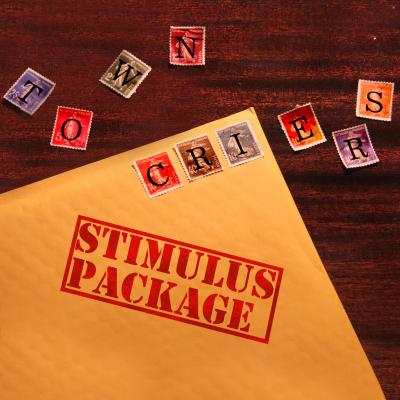 The Town Criers show how far a cappella has come: this high school group's energetic new record would have landed in the top half of the college heap fifteen years ago. In modern times, it's a good start but still boils down to a basic truth. Music that sounds good in a campus arch doesn't translate that well to a recording.

A few of the more modern numbers here wouldn't sound out of place on an outtakes list from Foster Street (that Bubs album which was absolutely tops in its day). Take Soul Meets Body: nice solo work, good energy, a consistent beat, and woefully out of tune. Plus its old school "too-may too-may" intro is a little more glaring than anything going these days. Valiant effort. Still, I wouldn't recommend it.

So Cold is a little more conservative and a little more successful. In The End perhaps more so. One of the Town Criers' strengths is that they sound collegiate — as young men, they mostly seem to have grown into their voices and seem comfortable singing out. A lot of pre-college groups don't have that luxury. On a retro number like I Can See Clearly, this vocal strength leads to a pretty successful performance. One quibble there — isn't this that great old Trenchcoats arrangement? The liner notes credit Rockapella, who I don't think I've ever heard sing this song — forum folk, please set us straight.

When the tuning fails, it fails in a big way. Heartless has tons of energy and a pretty good groove, but the pitch issues make it tough to take on multiple spins. The Longest Time is a tough listen all around, along with Breakfast at Tiffany's and Crazy. Even the unsinkable The Lion Sleeps Tonight gets a little creative and a little too out of tune to enjoy. But it might not be so noticeable in an arch.

The Town Criers are a group of high school kids who sound like they like to sing. Unfortunately, I can't recommend their album Stimulus Package to any RARB readers.

The sad fact is that all of their songs are horribly out of tune. So much, sometimes, that it's painful. So much, other times, that it's comical. The tuning was equally bad between soloist and backup vocals. Therefore, memo to the Town Criers: please get a music director, if you don't already have one. Pick someone (adult or teen) who has a good ear. Have the director drill you on staying on pitch during prolonged unison notes and basic chords. Then have the director drill you on staying on pitch in melodic intervals. I could go on and on about this, but to sum up: the poor tuning made the album completely unlistenable to me. It must be improved, no two ways about it.

Some good news: the arrangements are more sophisticated than one might associate with a typical high school group — more like standard collegiate arrangements. While I was first tempted to recommend moving to simpler arrangements, in the end I decided against this. The Town Criers do sound like they are enjoying singing, and it does sound like the singers generally know their parts ... it's just that the singers are hitting their notes very much out of tune. There are some exceptions, where the soloist or backups hit glaringly wrong notes, but that was not the case most of the time. Therefore, I think sticking to arrangements that they seem to like, and practicing the tuning separately, is probably the way to go.

The only other thing to add is that in two of the songs there are attempts at autotuning (Heartless and Harder, Better, Faster, Criers). However, the autotuning is done simply to provide the "Cher effect" for the lead singer, and not to actually tune the harmonies, where it perhaps could have helped. Partially for this reason, I have to give Stimulus Package a failing grade in Sound/production along with the failing grade in Tuning/blend.

I guess my opinion has been made clear: the album is unfortunately unlistenable.

The Town Criers are an all-male a cappella group from Weston High School in Massachusetts. As far as high school groups go, they're a pretty solid bunch of singers. They tackle ambitious songs and arrangements, boast some impressive soloists, and are selling a full-length CD on iTunes and Amazon. I know my high school a cappella group wasn't nearly this good.

But they're also only in high school. And since we here at RARB cannot adhere to double standards, I am forced to review Stimulus Package against the greater a cappella community, including some of the collegiate and professional powerhouses that are cranking out consistently high quality material. So while they may be among the high school a cappella elite, the Town Criers still display some severe musical issues. Most notable is intonation.

Staying in tune is by far this group's biggest challenge. Every song suffers from pitch issues, albeit some more than others. (Rhythm is occasionally a problem as well.) I can tell from the solo performances that these kids can sing in tune, which makes me believe that they could make some considerable improvements if they listened to each other and paid attention to balance and blend a bit more. Some of the arrangements, such as Heartless and Harder, Better, Faster, Criers, are quite difficult (kudos to the arrangers), and may be a bit out of the comfort zone of some of the higher voices. The rest of the repertoire is largely comprised of stock a cappella fare (The Lion Sleeps Tonight, The Longest Time, etc.). But the guys are singing with heart, and I think most listeners will appreciate that.

Since the asking price is around $10 on Amazon.com, I'd recommend against purchasing this album. I hate to give this record a 1: the Town Criers show some promise, especially for a high school group. I hope to see them enjoy success and develop a strong program. But in absolute terms, there are too many musicality issues on Stimulus Package to warrant a higher score, especially given the ever more competitive recorded a cappella landscape.

To order this album, visit iTunes or Amazon.com; or contact the group for more information.