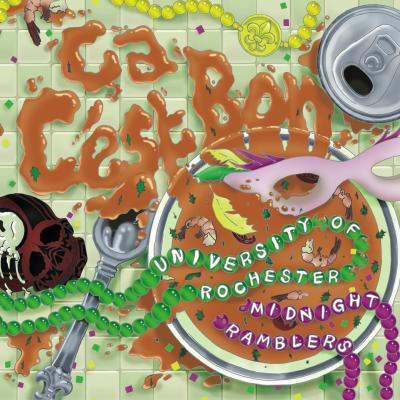 Plenty of bon temps on The Midnight Ramblers latest, with all the energy and dazzle and questionable taste that implies. The group says Ça C'est Bon is supposed to be a New Orleans-style good time. When you put it like that, calling any of it tacky seems like gilding the lily.

The dance tunes are the funnest, and unashamedly so. Low is bouncy and fun, Home has a fantastic earthy beat and then we roll into Number One, which is great, and fun, and then you hear the guy singing about his penis. By that time, there's no going back.

In a different (ahem) vein, Hallelujah is all that technically it aspires to be: Leonard Cohen, reimagined as a block chord power ballad. The arrangement is Hide and Seek meets Bohemian Rhapsody, complete with incongruous crescendo. Really? Ok. What the hell, let's add some extra glitter.

Brief sober moment: We All Need Saving is a pretty song, affectingly sung. I would have liked an arrangement with a lighter touch though. Fewer long block chords, more light arpeggiated acoustic guitar bits. Note to Ramblers arrangers: try to mix it up a little more next time, will you?

Onward, questionable repertoire! Tiny Dancer, 'nuff said, but no one who can sing it seems able to resist. Nor can any a cappella arranger resist the temptation to weave ti-nee-dann-ser into the background at some strategic point. Knights of Cydonia — really, is there any need for this song to exist? Groups have been doing electronica intros since the days of Off the Beat's Intermission. Without the intro, there is no song to this song, and anyway the Pitchforks did a version that I remember as nearly identical, which means these groups are derivative of either each other or the original. And then there's Golden, in all its pretentious faux epic banality, with an aggressively boring arrangement behind it.

But you know the group is good when the hapless reviewer is reduced to mocking the set list. Really, it doesn't matter that La Camisa Negra and the dance tunes are the only songs I actually like. The Ramblers made a good record and stuck to it. And by giving it that title, they pretty much swept me away.

The Midnight Ramblers showcase some nice, tight harmonies on Ça C'est Bon. They also have some fairly interesting arrangements in relation to most current a cappella discs. And it generally sounds like they're having a good time singing together, which infects the listener and makes the repeat listenability category rise above most groups.

However, the sound (produced by Liquid 5th) comes across muffled on most tracks, like The Ramblers' performance is being overheard in the room next door. I'd like to hear the voices a little more forward and natural, because The Ramblers actually have some singers and arrangements worth showcasing.

I enjoy The Ramblers' take on Hallelujah because it offers some creativity in their presentation. It doesn't go exactly where you think it would, and that is a good thing indeed. The simplicity in the verses is contrasted by the climax of the chorus. The second verse actually uses different backing rhythms/syllables (!!). Current a cappella blasphemy through and through.

Low is a guilty pleasure track that you'll be singing along to long after turning off Ça C'est Bon, and I wouldn't be surprised to see it end up on a compilation album this year. This track shows a nice balance of vocal processing effects with vocals in the front, although I'm not sure I understand the addition of Crazy Train on this track.

Misses for me were the over-affected solo interpretation of Fall Out Boy's Golden, an over-processed Knights of Cydonia and It's My Life, and an unmemorable throwaway track in The World You Love.

Tiny Dancer is a little on the long side, but the arrangement makes it interesting to listen to. Jeff Le does a nice job with the arrangement, even if the solo is forgettable.

The Midnight Ramblers don't need the over-the-top vocal processing effects heard on about half the tracks of Ça C'est Bon. If they continue to lean on their arrangers and ask for a more balanced sound from their producers, I believe they'll have a more complete album the next time around. This one's a little schizophrenic for me in terms of sound. To that end, tracks worth checking out: Hallelujah, Low, and We All Need Saving.

You know that old saying, "Less is more"? Well, someone should sit down with The Midnight Ramblers and explain this concept to them. Their latest release, Ça C'est Bon, is a great album that occasionally gets veiled by unnecessary post-production techniques. The songs you'll likely come back to are the ones that rely less on digitized effects and more on the group's natural abilities.

A good number of the tracks on this album show the talent of The Midnight Ramblers. Boy, do they groove in Home, with an edgy arrangement and a gritty, versatile soloist in Bobby Sanborn. Such wonderful natural energy! Similarly pleasing is their cover of La Camisa Negra by Colombian musician Juanes. Hats off for doing justice to a difficult song in another language: this track is stellar. On the other end of the spectrum, the guys offer some wonderful pieces of a more choral nature. Hallelujah will blow you away. This arrangement is masterful, full of gripping dissonant harmonies and rich chords. It is also executed perfectly, with proper attention paid to balance, blend, and tone. Their finale, We All Need Saving, is treated by an appropriately tender and thoughtful performance.

What do all the aforementioned tracks have in common? They're not accompanied by bells and whistles that, while meant to enhance the sound, actually detract from the overall listenability of the tracks. Several times while listening, I thought to myself, "Why are they doing this? They're a talented bunch; I want to hear how this would sound a cappella!" Listen to their take on Low and you may think you're listening to the real thing. Is that good? I think that depends on whom you ask (and it's been asked many times before by RARB reviewers!). But I'm looking for fresh approaches to songs with human voices, not carbon copies.

The biggest misfire for me is Knights of Cydonia. Why anyone would attempt an a cappella version of this song is beyond me; it's about 80% guitar shredding, most of which is the same repeated melody. And the entire song is transcribed note for note into a four-part mess. Don't get me wrong, I love Muse. But this version did nothing to convince me that it's well suited for a cappella singing.

All this aside, Ça C'est Bon is still a great album. There's a lot to sink your teeth into here and the boys can really sing. I must give an A+ for enthusiasm; The Ramblers will rock your socks off on this record. For me, however, it comes down to freshness. If some of the songs focused less on replicating the originals with high-tech after effects and more on unique approaches with the human voice, I might have a bit more praise to offer. But as it stands, the reality is that we're getting a good mix of wonderful a cappella singing and vaguely a cappella-style radio covers.