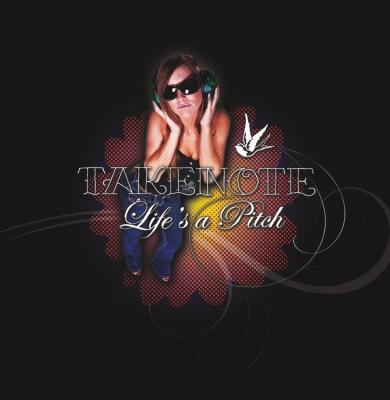 When performing material that calls for enhanced studio wizardry, studio wizardry itself becomes part and parcel of the artistic vision. Applied to the wrong material, it's an embarrassing remnant, a scar from studio surgery. In this age of ubiquitous technological know-how, each group must make its choices wisely.

TakeNote's use of technology is clearly the former, an excellent and necessary element of their sound. Unnatural as the vocal percussion may sound to purists, it compares favorably to any programmed drum machine on the radio today, an effect that furthers TakeNote's songs and arrangements. It's a choice that serves the music and the group well.

Life's a Pitch explodes with undeniable attitude and a perfect marriage of studio to song. Though the group opts for more mellow tracks in their programming, TakeNote's first-rate leads keep the intensity on most tracks.

While the production is outstanding for much of this release, I found Mexico, Dreaming With A Broken Heart, Take Me Away, and, to a lesser degree, Meaning, to display excessive reverb. Admittedly, this is a matter of preference. But I found the pervasive persistence of, well, all the notes, to be distracting. Silence propels music. Reverb insidiously steals that impetus. Even in a ballad.

Minor complaints, as I'm a fan of both the group and the production.

Though some readers may complain at Life's a Pitch's low track count, it's worth noting that these ladies do more with 7 than most with 14.

The new seven-song EP Life's a Pitch from Clemson University's TakeNote is a strong indicator of the talent that simply oozes from this mesmerizing female group. Life's a Pitch opens with one of the strongest dance and hip-hop tracks of the year in Showstopper and ends with a very pleasing cover of Gavin Degraw's Meaning. Check out the recording if you want to see how these Southern ladies are keeping collegiate a cappella sizzling hot.

Though Showstopper is a little under tempo for me, the arrangement by Robert Dietz molds to the attitude that TakeNote emits like the fancy dress of its original artists Danity Kane. They are truly bringing it like the big boys do. You'll want to crank your car stereo to 11 as you ride down the street pumping the bass. The song plays at getting nasty, and I'd love to hear a remix by James Cannon where he's allowed to do just that. With just a bit more grit and sass, this track could well rival and surpass Divisi' s collegiate female (and possibly collegiate in general) reign as having the all-time greatest hip-hop song (Yeah).

Unfortunately, what follows is a slightly treacly mix of sophomoric ballads. Although Amanda Vickery's solo on Tattoo is outstanding, the song lacks bite. Hands Clean perks along with some evocative storytelling. Dreaming With A Broken Heart doesn't have the maturity of the original, yet I was caught up in the melancholia of super diva Rachel Werth and simplicity of the arrangement — the bubble-bursting bell tones, the block choral background of the chorus and the sparse vocal percussion is near perfection. Mexico doesn't fair as well, lumbering on until it mercifully ends.

And then we're dancing away again with Fefe Dobson's Take Me Away. The drums bang and the background digs into the material with total gusto. The track could have used just a bit of variant dynamics that would have put the TakeNote signature stamp on the song. The scream near the bridge of Take Me Away would have made me piss my pants if there was a more guttural release of emotion. I wanted my speakers to burst from the pounding force. Didn't quite happen, but it was real close.

Take Me Away should have been the closer. It would have made a perfect bookmark. Meaning comes across as bit of a letdown ... though it too is a pretty good song. I'm feeling more reminiscent of On the M60 than I am of Now That We Have Your Attention. So while the album isn't a complete showstopper, it does put a lot of meaning behind TakeNote being one of the best groups performing nowadays.

TakeNote is Clemson University's all-female a cappella group, with 11-13 current singers. (11 faces were in the picture in the album notes; 13 names were listed on their website.) Life's a Pitch is a short album of seven tracks which does a good job of showing off the group's vocal skills.

The first thing that struck me when I listened to the album is how good the group sounds. Both the group and the producer (Dave Sperandio) undoubtedly deserve credit for this. Everything is very nicely in tune; the balance between solos, backgrounds, VP, and bass is always perfect. The bass sounds octavized, but tastefully so. Voices blend together agreeably. My only complaint about the production is with the "electric guitar" solo in Mexico: unfortunately to me it sounds as much like a kazoo as a guitar, and likely should have been edited differently.

To give you a feel for the sound on the album, let me describe one of the best songs, Tattoo, in some detail. It opens with instrumentals: bass on sustained notes, altos on a “ben-ben-ben-do-oh” riff, and a higher part coming in very softly with periodic “ahs”. The soloist and VP join in after 10-15 seconds of that. Altos change to sustained notes, and we get two higher parts that help to add some texture. The mixture stays pretty close to that for the rest of the song: approximately four backing parts, VP, and soloist. A duet part joins the soloist from time to time, blending nicely together, typically singing a third up from the soloist at the ends of phrases as is common in pop songs. The soloist sings her part in a nicely subdued manner. Nothing flashy, but with a very nice, straight sound. Later in the song, another duet part (I guess that would make it a trio part, wouldn’t it?) joins the solo & duet, and sings above the two with more flair: “Oh-oh, yeah, yeah, yeah.", then echoing the soloist: "Don’t look back…No need to worry…”. That singer could easily have ended up dominating the show, but the part is added quietly to the mix compared to the solo and duet parts. We are left with a tasteful pop song, which the term I’d use to describe the rest of the album as well.

The arrangements of the seven songs are by group member Laura Saunders (three songs), Nick Lyons (three songs), and Robert Dietz (one song). They are very similar to what I described above for Tattoo, and fairly typical of the collegiate a cappella scene these days: a soloist, a bass part, two other background parts (sometimes higher, sometimes lower than the soloist), and vocal percussion in every song. The vocal percussion was tastefully in the background, and sounded as if it could have come from a human mouth — something that I, for one, appreciate. Although the arrangements were adequate for their purpose, there were no jaw-dropping moments.

... and that just about says it all. Life's a Pitch is good, even very good, but not jaw-droppingly good. I expect fans of the group will be very satisfied, and I highly recommend the album to anyone who likes contemporary female a cappella covers of pop songs. But I can't go so far as to say that it's a "must have" album.