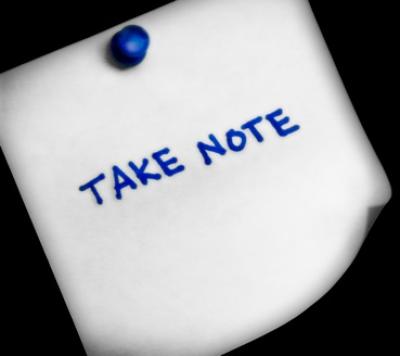 Take Note Acapella's eponymous 9-track release is a bit more creative than average, but nonetheless suffers from a slight personality disorder. To sing both You Raise Me Up without irony and No Air with excellence is to accommodate an exceptionally broad aesthetic. Listeners craving variety will rejoice at their good fortune. But those craving a group with a clear identity may find themselves frustrated.

Out of the gate, No Air is a head turner. Impressive leads tackle not only the vocal gymnastics but the emotional demands as well. Simple, effective production pushes this track into the sweet spot.

But that's the album's high point. A good bit of what follows has moments of awkward or overly formal delivery: nonsense syllables with excessive diction and leads following suit. A karaoke glee club. Still there are also many more moments where excellent leads and expressive dynamics catch the ear. It's as if a hip group of singers were instructed to perform in a square manner.

Surely, fans of the group will be pleased at a recording that shows off these talented singers and if some deliveries appear square or overly rehearsed, well let that be chocked up to the silliness of the genre or the youth of the singers. If you can do that, you'll love this energetic and creative release. If you lean more towards the side of artistic integrity, you may find that this group's pleasant singing still leaves an artistic core with much to be desired.

Take Note Acapella, a co-ed group from Catholic University of America, has released an eponymous debut disc that's brimming with the youthful enthusiasm and exuberance that one would expect from group a little over three years old.

The album is pretty breezy and quick with nine tracks. Take Note presents a fairly interesting selection of genres to represent the group's repertoire. It's rare to have a disc comprised of mainly mid-tempo to upbeat numbers. Even the ballads have a great deal of pace to them. So why the "3" score for Energy? Well, just because something is fast doesn't mean it's sung with a lot of gusto and ... well ... energy. There is tentativeness in the background blocks which often carried over to the soloist's performance of the songs.

The singers have bright smiley voices. The joy comes through with every "bah," "bop," "doo" and "dibby-dahbah-numma" which leads to a strong blending and choral sound. Yet this bright and smiley tone seems to be more of a detriment than a benefit to the group, because it influences the vocal performance stylistically. The voices come across as a bit too young and too forced; the overall quality of sound lacks a maturity and emotional warmth. The soloists are generally pleasing but not outstanding, with Kim Clark and John Buehler having the best command of their instruments.

Musically, there seems to have been more attention paid to precision than style. Regardless of the popularity of the television show, an a cappella group singing Happy Ending and Another Bohemian Bites the Rhapsody should strive for a bit more grit and pop influence than a completely glee club approach. Happy Ending is actually the most egregious as the opening phrases are nearly impossible to listen to without laughing.

On the flip side, this youthful zest and quality made three tracks stand out: You Raise Me Up, Chasing Cars and Slow Me Down. Joseph Bates' arrangement of You Raise Me Up capitalizes on the more choral strengths of the group. The pairing of James Cannon's mesmerizing arrangement of Chasing Cars with Dave Pilkenton's earnest solo added a layer of hurt to this song that I wasn't expecting. And Allie McWatters' liltingly childlike soporano floated effortlessly over the background in Slow Me Down.

Take Note is a fun disc, nothing earth-shattering, but okay for a group's first attempt. I would encourage the members of the group to learn more about the various styles they are singing and adapt their formal training with a more laidback quality.

Don't confuse this Take Note a cappella group with the one from Clemson University which was also recently reviewed at RARB. This one is from Catholic University. They are a coed group, with 15 members. According to their myspace page, the group was formed in Fall 2007. This is their debut album, and as such it is very impressive.

The album opens with two songs I've heard recently from other collegiate groups: No Air and Happy Ending. Neither is especially unique, but Happy Ending does give the listener the first taste of what will become a theme throughout the album: excellent female soloists. Kim Clark does an admirable job, with style, clarity, and beauty in her voice. (Kim also shares the solo in You Raise Me Up, and does an equally good job there.)

The next song, California Medley also gives the listener a taste of an ongoing theme: medleys. Three medleys on a nine track album seems excessive to me. This one is the worst of the bunch, with a mash-up of California Girls (Beach Boys), California Dreamin' (Mamas and Papas), and California (probably based on the Phantom Planet song, but since they just sing "California, here we come" over and over again it's hard to tell). Unfortunately the arrangement is completely uninspiring, and I found myself skipping the track after my first couple of listens of the album.

The other two medleys fare better. Chariot To Follow is a mix of Chariot and Follow Through, by Gavin DeGraw. The best part was the female soloist, Christina Wolfgram. Another Bohemian Bites the Rhapsody is a medley of three Queen songs: Bohemian Rhapsody, We Are the Champions, and Another One Bites the Dust. The best part? Christina Wolfgram again, who solos on the middle section. On both medleys her voice has an interesting quality which invites the listener into the song. It's not an overpowering voice, but like Clark she has style and clarity, and a very nice vibrato.

To round out the album, You Raise Me Up, I'm Yours, and Chasing Cars are all "pretty good", solid but uninspiring covers of popular tunes. The last song on the album, Slow Me Down (opb Emmy Rossum) however, raises the bar and leaves the listener wanting more. As good as some of the other female soloists are, Allie McWatters is possibly the best soloist on the album. She does an admirable job of spitting out the words in the fast, almost spoken sections of the song without seeming rushed. And on the slower sections she has a nice pure tone. The song does end a little abruptly, though, and because of that might have been better suited as something other than the final track.

On the album overall, the tuning, blend, and balance is nearly always excellent. That makes it an enjoyable listen despite the mostly uninteresting arrangements. When I was thinking of other albums to compare it to, ironically the one that kept coming to my mind was Life's a Pitch by the other Take Note (Clemson). So, I'll conclude by echoing my final comments from that album's review: this album is good, even very good at times, but not jaw-droppingly-good. I expect fans of the group will be very satisfied. But I can't go so far as to say that it's a "must have" album.