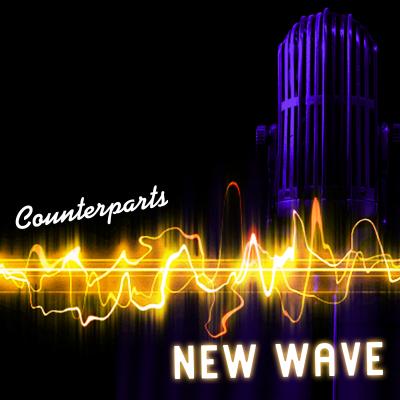 New Wave is pleasantly old school. Warm, fuzzy, and pleasant young voices sing a set of nice songs quite well. This album isn't sparkly or perfectionistic. Instead, it's likeable, which is a more valuable achievement.

My favorite track is Let Me Go, with its relaxed groove and wonderful mood. This song is in no hurry. It's not trying to prove anything. It's at peace, in performance and in the soloist's delivery of her decision. The Wanderer picks up later where Let Me Go left off. The Counterparts let the song unfold, without any rush or agenda to prove. Gets me to smile every time.

The rest of the album is nice too. All of the songs are pretty well in tune, pretty well sung. There's a lot of consistency of talent here. The set list is fairly adult contemporary, nothing too angry but nothing too boring either. Apologize is as cheesy as it gets: the rest of the tracks have an admirable dignity about them. If anything, Whatever Lola Wants was too restrained. That said, this self-contained presentation stood A Woman's Worth in very good stead.

There is one shiny exception: Come Together, an a cappella stalwart since the Bobs, shown off here with a cute jazzy intro that makes way for a shiny modern main event. I'd say it's wasted on the end of the disc, except that the laid-back groove that all the other songs establish continues into this song and gives it even more weight and credibility. I love the arrangement, and I prefer it to the busy puzzles that tend to win the a cappella arranging prizes.

I liked this album every time I listened to it, even as I dithered over what and how much to say. In the end, it's easy to like because it knows what it is. These Counterparts seem to know who they are and they've welcomed us into their world for a while.

I first heard the Counterparts in September 1990, so it's nearly twenty years since I became a fan. Yet even as a fan, I'm deeply disappointed that I've had to wait four years to review another CD of theirs, and what I get is New Wave.

Almost without exception, New Wave is safe. It's pleasant. It's OK. That's about the extent of the praise I can muster for an album that fell well short of my expectations — especially for a group that I am already predisposed to like.

It's rare that I go through the RARB categories so blatantly, but in this instance, they provide a very good jumping-off point for noting what is not so much wrong, but also not so much right with this CD.

The tuning is generally quite good, but in this day and age, it's quite rare to receive a CD from any of the well-established collegiate groups that isn't in tune. Whether it was initially performed well or edited well or auto-tuned well, the end result is almost besides the point, though it should be noted that surviving whatever technological wizardy Jeff Thacher provided are several moving passages in both the sopranos and tenors where tuning sloppiness lives on for posterity. As for blend, it too is reasonably good among the background block, though said block does often compete with, and sometimes threatens to swallow the soloist.

Energy and intensity is, as the score above would indicate, nothing more than average. Contributing to this are repertoire choices that never moved me beyond a resting pulse, save perhaps for the first minute of the final track. OK, maybe The Wanderer too got my foot tapping for the first half of the song but otherwise, the password here is "mid-tempo" (or less). There just isn't a high energy, explosive, exciting, throat-grabbing track to be found anywhere, and what is here feels mellow at best and sleepy at worst.

Creativity and innovation are the biggest sore spots for me, especially for a group that has a tradition of reinvention and reinterpretation. Bruce Wells is an exception here as his takes on Whatever Lola Wants and Come Together at least show a measure of creativity and non-literalness (if such a word exists) in approaching well-known songs. But even Bruce needs to learn that while the initial hook/motif is nifty, the song then needs to go somewhere, expand on the idea, develop it, rather than repeat it ad nauseum. As for the rest, "ooh-ahh" and "ba-dah" arrangements abound, often set against thumping VP and bottom-heavy voicings that just drag the energy down even further. Much to my chagrin, there's almost nothing unexpected in any of the arrangements and what fun is that?

Sound and production has essentially been covered above. The overall sound has a polished sheen on it that one expects from Jeff Thacher, but the balance between the solo and background block is often questionable and the VP draws a bit too much attention to itself at times. The soloists are all satisfactory if unmemorable, and none of them will knock your socks off or really even impress. Repeat listenability is the lowest I've ever ranked a Counterparts CD simply because who wants to listen to similar sounding, similar tempo repertoire, arranged serviceably but generally uninterestingly and performed with only a minimally sufficient amount of energy songs?

So overall it's a 3. Average. For the Counterparts — at least based on the standard that I hold them to — it's actually below average. But even the Counterparts on a bad day create a sound that any number of groups I've been forced to listen to would envy. Still, I think I'll pop in one of my cassettes from the 90s to remind myself of what they used to be.

I have long maintained that, to the degree there is a mainstream market for collegiate a cappella, there is a market for the Counterparts. With competence, originality and swagger, they have ably answered the question that plagues this musical niche... "So what?"

For starters, One Republic happened, and with it the compulsory cover of its screechy non-classic Apologize. The Counterparts have at this version with their signature bluesy approach, and the soloist knows what he's doing (unlike the original artist). But you don't stay relevant by doing the most predictable thing, and there's only so much you can do with block chords besides.

Actually, I take that back. The Counterparts do some pretty nice things with block chords. They quickly recover with In The Waiting Line, and I was reminded of what makes this group groove: tight chords that revel in the contours of the original without regurgitating them, a soloist (Katie Foster) who has a lot in the tank, but knows when to use it ...

And yeah, there's that swagger. It comes and goes. New Wave reveals a group that seems to have forgotten why it grooves.

Consider the Chaka Khan track. Ain't Nobody is totally in their wheelhouse. Jose Louro's arrangement sets the group up for a grand slam. Then, just when the song is supposed to explode, we get altos nervously backing away from the chord, and a soloist who can't sell the chorus. Oh, and the baritones are flat and uninterested.

I'm not sure the production approach does the group any favors. Contemporary effects are dribbled on top of an organic sound. Time would have been better spent brightening up the group sound. At times it sounds like I'm listening to a raw studio track.

Also, if you cover a deeper cut from a famous artist (and you should), it makes little sense to cover that artist's pop hit two tracks later. This is especially true when that cover, Trouble Sleeping by Marc Broussard, offers so little to recommend it.

There are still some remnants of cooler days on this album. Whatever Lola Wants is a bold and convincing cover, and shows off the group's jazz chops. The minimalist percussion complements the group's sound nicely, especially on The Wanderer (the other Broussard track), which is a hit all around.

It has been several years since the Counterparts have released an album, an uncharacteristic gap which may signify a reinvention. Here's hoping the group doesn't reinvent its way out of relevance.