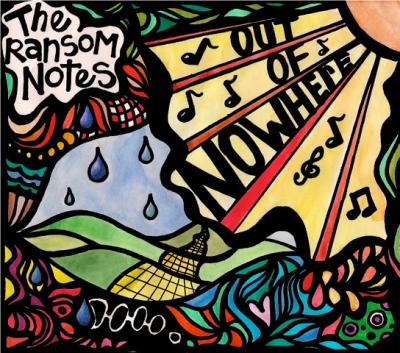 The latest offering from co-ed group Ransom Notes can best be described as one filled with halfsies. Half of the album contains pretty good songs. Half of the soloists are up to par with the tracks they are given. Often the second half of the lead line (also known as the duet) far outshines the melody maker. Sometimes only half of a song is well balanced amongst the various parts. Half of the arrangements mar what would have been an incredible track. The other half of the arrangements made me chuckle, guffaw or wince. Half the time I bumped up an individual track score because I really like the original song. And finally, half the time I thought, why isn't this group just the basses who consistently kicked ass on every track.

The opening track Hallelujah by Paramore is a prime example. Yes, I was half glad that it wasn't another cover of the Leonard Cohen piece. As an opener based on the rest of the album, it was the only choice. But the balance and recording emphasis is off right from the start with a crazy soprano line and disjointed lower sections that are incessantly repeated. And then the soloist enters and it's almost unbearable. Then, about halfway through the song, Erin Mayer finds a depth to her voice and she nails it through to the end.

This dichotomy is prevalent in almost every song. I would start to write off a track as being another juvenile attempt at making music and then blam! A glorious chord or intriguing turn of phrase or stellar melisma or vocal timbre knocks me off my feet.

The arrangements are average, they probably sound great live. But on the album each vocal section is given equal weight on almost every track. After a while each song starts to come across as a lot of busy mush. And to be able to be both busy and mushy at the same time is an accomplishment in and of itself.

I've noted as far back as The Octaves' Shotgun that one of my favorite songs is All at Sea. While certainly not as good as theirs, I did enjoy listening to The Ransom Notes' performance on this version.

Heaven is definitely the standout track of the album, and thankfully it followed All at Sea on my first listen. The major positive is the fantastic solo that emanates from Zachary Franchini. He continues to send chills through me upon each listen. I love his control and his freedom of expression and his vocal quality. All around superb job.

But I almost couldn't listen to the song because of the misguided opening. After a great gospel-like refrain of "Heaven only knows, heaven only know-ohs" by half the group, there is this totally square and unrhythmic "dum-dum" block that completely unhinges the groove. Not only that, then comes the baffling verbalization of the onomatopoetic word "hum". Like they actually sing the word "hum" in a non-ironic manner instead of just humming. What?

If you have easy access to the album (meaning you are friends with a member currently in the group) then the album does have enough good qualities to be worth a listen. Especially to hear Zachary Franchini. But if you aren't on the Texas campus, I do not recommend in anyway that you try to search for the album to return it from Out of Nowhere.

Out of Nowhere is a pleasant listen, with some good soloists, solid musicianship, and unique song choices.

About four or five tracks into my first listen through the Ransom Notes' latest album, however, I felt the inclination to check something in the liner notes. It wasn't about a soloist, or an original artist, or an arranger. It was, in fact, to find out who in mercy's name was behind the production of this record.

It didn't take long for my suspicions to be confirmed: Out of Nowhere was largely recorded, mixed and mastered "in-house" by some of the group's members. Nothing against these people — I'm sure they put a lot of work into this album — but this certainly ain't a pro job.

Suffice it to say, the production is this album's weak spot. Most of the tracks sound, for lack of a better term, wet. Mushy. Blurry. If there were such thing as "impressionist a cappella," this would be it.

Take, for example, the album's very first track, Hallelujah. A great solo performance from Erin Mayer, to be sure. But what's with the block? They sound so distant and muffled. Are the basses under water? And why does it sound like the percussionist is down the street? You can hardly hear him at all. In general, the tracks lack a certain crispness that is crucial to properly executing many of these arrangements. Too many of the intricacies get lost in the mud.

This issue is present throughout the album — especially the percussion. It's so low in the mix and wet with reverb that it honestly might as well not be there. It's a shame, too, because the singing is pretty solid. But I was never quite able to get past the production issues. They truly detract from an otherwise above-average album.

As I said, though, the group is quite pleasant to listen to, even if the tracks lack the more refined substance that a more competently mixed album would possess. We can hear the singers' high-quality musicianship most clearly in the finale, Droplets. What a stellar solo performance by Samantha Strauss and Sam Rosen, coupled by a high-energy and well-balanced group sound. Nicely done.

It's unfortunate that Out of Nowhere is hindered by this post-production treatment. We may have some truly talented musicians in this group, but in the end we have the right pieces put together in the wrong way.

Out of Nowhere is a tough album to review because it largely fails to make an impression on me. Nothing sticks out as particularly great, nor as exceptionally terrible. To speak synesthetically, nearly every track is at best in muted tones, if not shades of gray. The end result is, for the most part, a feeling of sameness that hangs over the album like a cloud.

The mix sounds rough and underproduced, with the occasional background part sticking out for no obvious reason. The parts that stick out are more glaring because most of the backing vocals lack clarity and energy, sounding as though they're sung inside a bag. The different lines don't always quite align the way they should, turning what might be interlocking parts into a murky stew. The percussion is generally weak and too far back in the mix, failing in its role of establishing a groove for the track as a whole. Sometimes the vp throws in random triplets and fills at the expense of actually hitting the important beats.

The track that bothered me most was Drift Away. The Ransom Notes feel compelled to over-complicate what is at heart a fairly simple song, and the arrangement trips itself up. For a song whose chorus repeatedly says "Give me the beat [...] I wanna get lost in your rock and roll", there's no real sense of beat or rock and roll, feeling instead like a mess of ornamentation and frills on top of a weak foundation.

Hallelujah (a Paramore cover) was a good choice for the opener, given the options. It has more emotion and energy than the rest of the album, in large part because of Erin Mayer's solo. When the Ransom Notes are energetic, they come off as a bit unfocused. But the overexcited backs of Hallelujah are infinitely preferable to the plodding block of Human, giving Mayer at least a modicum of support.

The soloists (including Mayer) are the best part of this album. Most of them sing reasonably well and appropriately for their songs, if never exactly blowing the listener away. Paul Marbach, on All at Sea, largely channels Jamie Cullum but gives some appropriate edge and emotion of his own. And Lauren Carlson's turn on City does some nice things, particularly with the bridge and climax, although she's too far back in the mix to do justice to her performance.

There are glimmers of hope here. If the energy of Hallelujah could be focused and brought to bear on tracks like Blush or Drift Away, it could work wonders. The next step is tightening up both the voices and the mix. Look to Droplets for inspiration on how to maintain a fairly natural sound while still sounding clean. There are good voices here, but they need to be put in a context which showcases them to better advantage.

To order this album, email the group's director; the cost is $12.