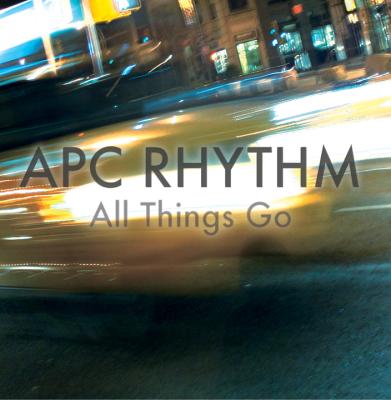 There are times when I wish RARB had finer gradations in the overall rankings than 1 through 5. If so, I would probably have rated this album a 4.5. As it is, I had to round down to 4. On the other hand, if a single track had been omitted from the album (Somebody to Love, more on that later), I would have rounded up to 5.

But I suppose that is jumping the gun a little. Let me first touch on the high points of All Things Go — and there are many. First and foremost, APC Rhythm has some outstanding soloists. The two who impressed me the most were Katherine Papcostas in Good Luck, who gets the album off to a great start by busting out the song in full "attitude mode", and Carol Dowty in The Weight, who despite showing off some Aretha-eque vocals also manages to sing nicely restrained where full voice is not appropriate. Another one who impresses is Jenna Rubenstein, on my favorite track of the album, Destiny. I find this song, helped in large part by her solo, almost hypnotic: it sucks me in, immerses me in the music, and makes me want to close my eyes to forget about the rest of the world for a time.

Next, I think the arrangements are outstanding (with the exception of Somebody to Love). Most of the credit here goes to Emily Gu, who arranged/co-arranged ten of the twelve tracks. The arrangements typically have six or seven vocal parts going on at any given time, along with one or two vocal percussion parts. The vp typically includes snare hits on beats two and four along with a high-hat playing eight notes. The solo is often carried by a soprano, but sometimes by a tenor. There is sometimes another high soprano part, and nearly always one or two alto parts. Often these parts just provide filler notes in the chords, but sometimes include more interesting things. Oddly enough, I can't always hear a tenor part, but the bass is always present and accounted for. Unfortunately, the bass, presumably modeled after a typical rock bass guitar, only rarely gets to change notes more than once or twice a measure. The parts all blend together nicely, though, and combine to produce a very full, rich sound. The overall nice, full sound is a strength of the album, and probably is a credit to the producer (Liquid 5th, I believe) as much as to the arrangers.

The main low point, as mentioned above, is the song Somebody to Love. This song has a male and a female soloist who trade parts back and forth reminiscent of Elton John and Kiki Dee in Don't Go Breaking My Heart. They clash horribly, even though each soloist does a fine job soloing on one or more other tracks on the album. The arrangement doesn't work for me, especially the breaking into We Are the Champions halfway through. The male soloist sounds especially bad on "keep on fighting", in which he has to break into falsetto. The background guitar sounds equally bad, and the driving beat percussion effect towards the end just sounds like someone tapping on the microphone. Did I mention I'm not a fan of this song?

Even if we give APC Rhythm a mulligan for Somebody to Love, there are still some weaknesses on All Things Go. I feel the album seems to lack an overall arc or story. Some song choices are suspect. For example, I already have four other versions of Marc Broussard's Home, and four other versions of Love Song, and the two tracks presented here do not really add anything to the mix. Even within a given song, I sometimes felt like the story of the lyrics could have been told more expressively.

So, should you purchase All Things Go? Well, eleven of the twelve tracks and 46 of the 50 minutes are certainly very enjoyable. Overall I give it a clear thumbs up.

The thing APC Rhythm does exceptionally, for the most part, is texture. Though most of the arrangements on All Things Go are credited to Emily Gu, they range stylistically from Hollywood to Turn Off The Light to Chicago, with each feeling distinct and unique. The careful choices made in the arrangements are accented by the production, which underlines each song's particular flavor without being overly aggressive. The BOCA-selected Chicago is a wonderful example of the kind of growth and evolution these guys do well when they're on. The track manages to be both sweeping and delicate at turns, with a lot of subtle little flourishes — including fairly credible vibraphone impressions and one of my favorite uses of vocal sleigh bells outside of a Christmas song. Likewise, there are a number of topnotch openings on the album - the frenetic Good Luck and the foreboding Hollywood being excellent examples. In Destiny, shimmering ethereal highs give way to a churning trance theme that runs the better part of a minute before the lead vocal even begins.

The trouble is that not all of the tracks build on these openings. Once the groove is established, it too often stays on an even keel, with the sound evolving texturally, but not emotionally. Good Luck is an exception to this, with its insistent proclamation of "No More Lies!" building out of the bridge and pushing through the climax. But, for instance, when The Weight shifts into a higher key musically, it fails to do so energetically — Carol Dowty's justifiably CARA-nominated solo is going off, but the rest of the group stays pretty much in the pocket they've already established. It's this tendency that keeps a very good album from acheiving excellence.

The album sags somewhat in the back third with Somebody to Love. Queen needs a balls-to-the-wall performance, and APC Rhythm falls significantly short of the mark, going through the motions instead of over the top. The backs feel almost mechanical behind a pair of soloists who hit the notes with style but never connect to the pleading and begging of the lyrics. Somebody to Love is followed in turn by Home, which showcases as many different sonic ideas as Chicago, but backs off when it feels like it should be exploding. And while I enjoyed Breathe In and its fade into horns at the end, it fails to serve as an effective closer.

I worry that these criticisms may leave the incorrect impression that I didn't enjoy the album. The production here is well-executed, and there are some very nice moments of both arranging and performance. But while the men and women of APC Rhythm have turned out quite a good album, they still have work ahead of them to achieve greatness. I look forward to their next recording, to see if they can build even further on this already strong effort.

A cappella keeps getting better, and a cappella keeps getting bigger. Advances in studio technology have benefited the genre, as the ability to transform the voice into a rock band has never been easier. Sounds that were previously impossible to sing can now be achieved through some careful manipulation. I thought about the power of the studio frequently while I listened to APC Rhythm's solid release, All Things Go.

APC Rhythm favors an expansive sound. The grandiose intro of Beautiful Day, the lush ambient sounds of Destiny, the symphonic touches in Chicago ... there is a definite feeling that Phil Spector's Wall of Sound is alive and well in these recordings. But the size of the sound is a double-edged sword — one moment it's rich and full, the next it's busy and overblown. The background parts sound fantastic on this album; they have drive and energy, and the tuning's great overall. The mix is superb, with only a couple of glitches (usually surrounding the bass or the vocal percussion) noticeable to my ears.

The main production flaw on All Things Go relates to the soloists. There is a very clear attempt to keep the soloists unprocessed, which is always a great idea; no one wants to sound like Cher singing Believe when they're wailing out Aretha Franklin. However, the soloists often sound distant and removed from the mix, almost as if they're singing along to a karaoke backing track. A couple of songs (Turn Off The Light, Behind Blue Eyes, Somebody to Love) do a better job integrating the soloist into the mix, but they're the exception rather than the rule.

Enough about the production. The arrangements are strong, though there were a couple moments where I could only think " ... huh". The crisp "jahn jahn jah nah" background in Love Song is so glee club that it's almost comical. The syllables at the beginning of Behind Blue Eyes are distracting and weak. The sopranos are up in the stratosphere for too much of Destiny, though the mix does a good job of covering this. On the other side of things, there are some standout arrangements. Hollywood, originally by The Cranberries, builds nicely and features a haunting solo. Chicago melds processed and pure vocals with skill. And as for Home, well ... I'm not ashamed to say I actually started dancing as I listened to it the first time. This is an absolutely terrific track that will remain in my rotation for quite a while.

APC Rhythm is brimming with talent, and it's fantastic that the group has the confidence to really explore the possibilities of the studio. My advice for future releases would be to go even further — this group has an excellent vocal sound, and it has the potential to create some incredible things with the assistance of the studio. A good effort, and a very enjoyable listen.