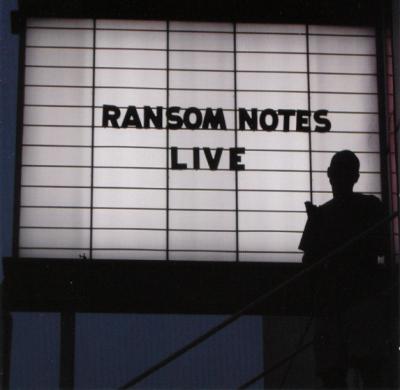 Live albums are tough to handle, folks. Despite some lovely soloists, energetic blocks, and surprisingly audible basses, The Ransom Notes' live release is crippled by the limitations of the format. Off-the-Beat-style rock arrangements beg for single-part mixing and correction. Not surprisingly, two of the most successful tracks, It Ain't Over and Mercy Street, are among the smoother numbers on the album.

Some of the tracks aren't even close to listenable. I Think I Love You sounds like somebody spilled coffee on the DAT. Pops, weaving volume, and feedback are par for the course. I was also disappointed to see so many guest arrangements when the group clearly has solid arrangers in-house. Soul to Squeeze is a good song, but if I want to hear Gabe Rutman's arrangement of this song, I'll choose the version with Gabe himself on solo that Off the Beat recorded back in 1994 (also heard on BOCA Volume 1). Ditto for Voices Carry, Hush, and The Bubs' version of Mercy Street.

As many college groups do, The Ransom Notes appear to be having trouble finding guys (A Thousand Years) who can solo with the authority of their women (Killing Me Softly). They also might want to consider cutting a chorus or five out of the tracks that clock in at four minutes plus.

Your enjoyment of this disc, or lack thereof, will be almost entirely determined by how much slack you want to cut. If you're a forgiving listener who loves live shows, you might get a kick out of The Ransom Notes' naked noise. If you're a perfectionist, wait till they hit the studio.

The Ransom Notes, a coed group out of UT-Austin, made a very bold move by putting out this CD, the aptly named Live. Collegiate groups rarely put ANY live tracks on their albums, and here we have a disc entirely comprised of live tracks, culled from two concerts from two different school years. This format certainly has its benefits, including the ability to capture the energy of a live performance and significant cost-reduction. Unfortunately, the drawbacks that keep most groups recording in the studio rear their ugly heads here. Tuning issues can't be fixed, group balance is harder to manage, and the sound is generally rather muddy, which is unfortunate when the group is singing complex arrangements.

It sounds like these guys put on a pretty good show. The arrangements are complex and interesting in that Off the Beat style (in fact, two of the tracks were arranged by Gabe Rutman, from his days with OTB), the energy is quite good, and soloists are emotionally committed.

Sadly, they don't put on a spotless show. Tuning problems pop up, much of the time chords don't fully lock, and every so often (She Don't Use Jelly and I Think I love You, especially) the tonal center is lost for too long. Tenors sometimes hang below pitches, trebles sometimes go sharp, and basses sometimes sacrifice accuracy in favor of volume. The soloists also too frequently struggle with notes, breath support, and tuning. Were these tracks produced in a studio, these problems could have been fixed either by the engineer or by recording another take.

The recording quality pulls this disc down. With wonderfully crafted and layered arrangements, from Gabe Rutman's Soul To Squeeze, to Graham Davis' haunting version of Sting's A Thousand Years, to James Bristow's quotation-laden Killing Me Softly, it's sad to hear all the parts blend into a muddy quagmire, when more microphones or a studio recording could have allowed them all their own space. The balance also changes from track to track, depending on who was closer to the microphone. This can be expected from your average live recording, which is why most groups don't attempt projects like this, except more casually.

I've heard few live collegiate tracks that I thought were every bit as good as the same group's studio work (check out Carnival on OTB's When Mama's Not Around). That being said, The Ransom Notes specifically wanted to capture their live sound on CD, and they fared better than I would have guessed.

I was expecting the worst when I first read the title of the latest release from the University of Texas Ransom Notes. Because I rarely enjoy or appreciate live albums, this recording had two strikes against it even before I heard a note. I began to wonder how I would go about reviewing a disc that, in my mind, seemed destined for failure.

In light of the above, I am pleased to report that I found a number of nice moments on this album. Sting's A Thousand Years shows The Ransom Notes' musicality at its best. Graham Davis' solo and arrangement beautifully capture the song's haunting, ethereal mood. Another winner — though, I'll admit, surprisingly — is The Notes' transcription of spiralmouth's Hush. I'm usually not a fan of pro a cappella covers, but a nice solo by Brandon Gaide and a full group sound give this one some punch. Howard Jones' No One Is to Blame is also characterized by a confident group sound.

Unfortunately, this album is lacking in a number of areas. To begin, The Ransom Notes have chosen to record a set of songs that are stylistically too similar to one another. With the exception of Stay and She Don't Use Jelly, the disc seems to drag on and on without enough energetic uptempo tunes to enliven the mix. There are no rockers and no true openers (or even big closers) in sight.

Second, the majority of tunes on this album are characterized by a rather weak blend between the women's and men's voices. More importantly, though, the music directors need to emphasize and work on more dynamics, energy and overall charisma. The album's biggest weakness is a general lack of expressiveness.

Lastly, there is some nice singing going on, but it is marred by poor live recording. Entire parts disappear, then reappear too loud; soloists are often too soft; basses are inaudible in many songs. These are all symptoms of a poor live recording method.

I implore The Ransom Notes to consider a studio album. There are a number of tracks on this album that would have made excellent studio tracks, but were marred by poor live miking and lethargic singing. On the bright side, there is a lot of room for this group to grow. I'm confident that this talented group can improve.