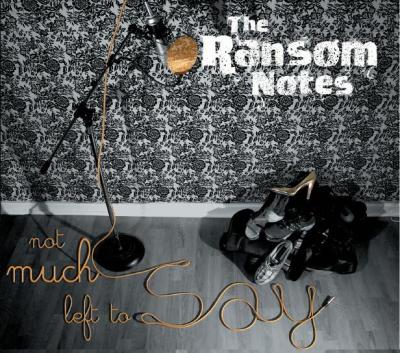 At its best, the new Ransom Notes record is full of energy and a vibrant stage presence that catapults Not Much Left to Say over its wall-of-sound production and sometimes shaky tuning. When that afterburner fails, however, the only reinforcements are a few good soloists and some fresh-voiced optimism. And good cheer just isn't enough to win this nine-song siege.

Slow Down Baby is a blazing album opener, followed by the equally loud but substantially less successful Beautiful Love. From there, the Ransom Notes settle into a seesaw circuit of nice voices and imperfect performance. Pamelagrace Okeke has wonderful soloist chops that turn Front Row into a fine listen. Two songs later, Shannon Silber's sweet tones aren't nearly powerful enough to save Beautiful Disaster from its disastrous tuning. After that, the album has an uneventful coast to the finish, with the nice voices and the imperfect tuning splitting the bill. Only the production seems to skip the see-saw — instead, the big shiny sound at the beginning tapers off into a nearly natural blend as the disc progresses. Artistically, it's not a bad setup. Without better tuning, the whole continuum has problems.

If this nice-but-imperfect sound is the Ransom Notes' hallmark, it'd be kind of fun if they ran with it. Why not throw the top 40 out the window and start arranging from the KGSR songbook? The Way Life is Supposed to Be shows that this group gets the Austin groove. Soloist Brooks Ballard does a great job channeling Bob Schneider's laid back, rock-and-roll swing. Pick another dozen local songs out of the free-spirited Austin scene, which has never let musical perfection interfere with its greatness. There are a lot of good tunes out there, and Not Much Left to Say shows that there's a lot of nice singing to go around.

This record cries out for technique this group doesn't have. Here's hoping on the next one they play to their strengths.

Not Much Left to Say is not a title that inspires one to tear away the shrink-wrap with any measure of enthusiasm. But this is what the Ransom Notes have chosen to name their uninspiring album. The latest offering from this University of Texas coed group plods along the spectrum from serviceable to unlistenable, all in the course of nine tracks. I didn't like it.

Generally speaking, the Ransom Notes' most prolific members are not also the group's best singers. Pamelagrace Okeke sings the teeth off Toby Lightman's Front Row, but makes no contributions in terms of arranging or musical leadership (not in any official capacity, anyway). If she were music director, she might have arranged three more solos for herself.

Instead, we are treated to a succession of monotonous "ahhs" and "dooms". This is not unheard of in the world of collegiate a cappella (to say the least), but the purpose of simple arranging is to allow the group's voices to lock into the melodic focus of the song. The backing vocals on this album border would border on mechanical, were they not also generally out of tune.

Take the cover of Beautiful Disaster, which lives up to half of its title. Kelly Clarkson does one thing well: bombastic choruses that spring out of nowhere and serve as a conduit for Ms. Idol's shouty upper register. Alas, The Ransom Notes sing the entire song at a lethargic mezzo forte. The end result is something like decaffeinated Mountain Dew.

This brings me to producer Mark Sarisky, who seems to have been asleep at the wheel here. This album is a malaise of middle, which is unfortunate because the basses and sopranos could use some help. This recording reminds me of the days when heavy production was used simply to replicate the visceral feel of live performances. Not Much Left to Say sounds like it was sung into a sponge.

Nine tracks do not constitute an overly ambitious project for two seasons of recording, which makes the end result all the more disappointing. The arrangers do a good job selecting from diverse styles and some relatively uncharted territory, but there are still some flops.

Let's Get it On does not lend itself to the group's click-tracky groove, and Ryan Harkrider strains against the simplicity of Marvin Gaye's delicately earnest proposal. It sounds like he's serenading a plate of zesty nachos. An effort to incorporate a refrain from With or Without You into the Until You cover falls flat, partly because the arrangement never builds to the level of complexity necessary for this sort of juxtaposition.

On a positive note, the weakest moments of the album were recorded by the older iteration of the group, with new members infusing a bit of life into the opening track (not least of which, soloist Cherie Rivero). While I cannot recommend the album on those grounds, there remains hope that the Ransom Notes will have much more to say on future albums.

The Ransom Notes' album, Not Much Left to Say, should be fairly enjoyable for most fans of the collegiate a cappella genre, but is certainly not a "must have" album by any stretch of the imagination.

First, the good: some of the soloists were really quite good. I thought two of the female leads in particular had really nice voices: Cherie Rivero on Slow Down Baby and Pamelagrace Okeke on Front Row. As for the men, Ryan Harkrider on Let's Get it On was also pretty good, and I enjoyed Ellie Carroll on Latter Days.

Now the not-so-good: the biggest single problem with the album may be the background vocals. They were out of tune on a number of tracks and were often too loud and in your face rather than letting the soloist shine through. There's a reason why they are called "background" vocals, right?

Some of the soloists also had pitch problems; two of the worst offending songs were Time and Beautiful Disaster. On Time, I'm not sure if the soloist was imitating the original performer, but she tended to irritatingly fade out on the long notes and get flat instead of sustaining the notes. I thought Beautiful Disaster was, pardon the pun, particularly disastrous. The soloist went flat in a lot of places and the song was often unpleasant to listen to. Also, I thought it was a little unprofessional to include a spoken comment by one of the female group members — "I like some of that" — at the end of the recording.

One more complaint I had: at the start of Let's Get it On one of the singers approximated the well-known instrumental introduction with a "wha wha wha wha". It may be a good idea, but it didn't translate well into practice. The bass line in that song was also particularly repetitive and boring.

The good and bad comments notwithstanding, the bulk of this album was, well, pretty average. On a lot of tracks the soloists were not great, not poor, but just okay; for example, Beautiful Love, The Way Life is Supposed to Be, and Until You. The arrangements all seemed standard for collegiate a cappella and not too imaginative. Most pieces were sung kind of mezzo-forte. The overall artistry seemed a bit lacking.

Bottom line: Although Not Much Left to Say had some enjoyable moments, none of the tracks made my MP3 player.