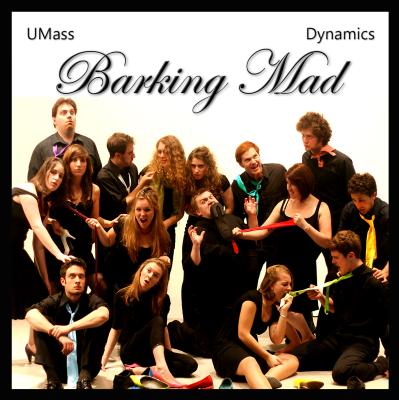 Barking Mad sounds an awful lot like The Dynamics' previous release, Love Games. Both of these albums recorded by the collegiate co-ed group offer ably sung pop covers that are decently arranged and adequately tuned. Both also feature far too much technical precision. Yes, there is such a thing.

As I stated in my review of Love Games, The Dynamics seem to struggle finding and extracting natural energy and enthusiasm. I have several theories as to why this is the case, and I hope that this time around, the group may consider my suggestions so it can improve. The most prominent issue to me is that the production choices make the tracks sound awfully mechanical — almost robotic.

Obviously, most every collegiate a cappella group samples, edits, slices and dices its recordings these days. But many find a way to preserve the natural emphases that the group provides (read: the "human factor"). I don't get this very often on Barking Mad, and when I do, it's a fleeting moment. Usually, the percussion, while perfectly timed, is muffled or distant. The bass is wet and muddy. The elements are churned out and Frankensteined together to create some sort of lifeless song-type item. The final product almost sounds like an a cappella MIDI of sorts.

But there are times on the album where I can't blame the lack of energy on the production. In certain cases, the singing itself just sounds so damn disinterested. The worst offender is probably Man In the Mirror. While it's fronted quite well by Susan Dillard, the backup vocals sound like one of those text-to-voice robots. There's not even a hint of energy to be found. It's almost like the singers are so concerned about hitting every note with such deadly precision that they're scared to death of taking any sort of risk by peppering in emotion. This is a big problem for me.

To be fair, this is not a group of bad musicians. There are some bright moments on the album. As I mentioned, everything is tuned nicely — it's not like anything is particularly displeasing to the ear. I Still Haven't Found What I'm Looking For is covered nicely, with a solid arrangement and an earnest performance by soloist Jessica Gordon. I was pleasantly surprised by the Kanye Medley — it was one of the rare instances where the group seemed to drop the sheet music and say, "Screw it, let's just have fun with this." Also, I must commend The Dynamics for tastefully and subtly censoring the dirty words here, just in case any children or grandmas or nuns are listening.

I feel like a bad person for marking down the group for being too precise, but there's a difference between "precise" and "perfect", especially when human enthusiasm suffers for it. This is collegiate a cappella, people. It should be lively! Entertaining! Even rowdy at times. I think The Dynamics, who are obviously talented singers, need to loosen up, drink some Red Bull, and aim to rock some socks off.

The University of Massachusetts' Dynamics call Barking Mad a "comeback release", but I see it as more of a rebirth. Their two previous efforts, 2007's Crescendo and 2008's Love Games, relied heavily on outsourced arrangements, but this time around it's all them.

While I commend The Dynamics for taking such a big step, they have done so at the expense of a quality product. Overall, the arrangements are serviceable and undeniably novice. I Wanna Dance With Somebody is a stellar opener, but it relies too much on repeated lyrics in the backing block. Change the World has long been a problem piece for a cappella, and Susan Dillard's version doesn't fare much better. Of the five arrangers featured, Michael Brignolo and Patrick Watson show the most promise; Brignolo's take on Man In the Mirror is on par with the Amalgamates' definitive BOCA version, and Watson's Kanye Medley is a fun and clever closer.

The song choice is all over the place: the majority is classic rock and '80s and '90s pop, with some Rilo Kiley and Ingrid Michaelson for indie cred and a pinch of Kanye for modern flavor. This would be less of a problem if The Dynamics executed them well, but most of the tracks fall flat due to an overall lack of energy and very thin sound. The one notable exception to this is the Kanye Medley, which takes full advantage of the studio to achieve the requisite hip-hop sound.

The soloists are hit-or-miss, but there are a few standouts. Rebecca Downey kills it on I Wanna Dance With Somebody, but she would be even better on a modern pop song. Corrine Byrne's take on Breakable perfectly captures the earnestness and sweetness of Ingrid Michaelson's original. Susan Dillard turns in a fine rendition of Man In the Mirror, albeit with an overly drawn out coda. Finally, honorable mention (and mad props) goes to the men on the Kanye Medley for their better-than-average rapping ability.

The main problem with Barking Mad is that it sounds like a debut album, even though this group should be capable of so much more. I hope The Dynamics will continue to hone their arranging skills, pump up the energy, and take better advantage of the studio for their next effort.

Barking Mad, the newest release from the UMass Dynamics, could use a shot of adrenaline. Almost every aspect of the album is safe and tasteful. There's nothing present to offend the ears, but there's also nothing to get excited about.

This is not to say I disliked Barking Mad. The Dynamics have put together a competent album that's also very easy to listen to. Well-tuned background vocals and appropriate soloists populate the album's eleven tracks, none of which stick out as being particularly weak. For the most part, the group maintains a wonderful blend that is in tune without sounding robotic (the bass and vocal percussion are consistent exceptions). Several soloists even manage to be standouts in an already solid field (Susan Dillard elevates Man In the Mirror with a committed performance, while Matt Magrath and Susan Campanile get bluesy on Give Me One Reason).

However, for all the album's competency and musicality, it never manages to lift itself up past the average level. A number of a cappella standbys (I Wanna Dance With Somebody, Change the World, Man In the Mirror) showcase unoriginal arrangements that fail to deliver any real energy or a new interpretation. Even arrangements that try to put a new spin on things, like Susan Dillard's I Still Haven't Found What I'm Looking For, seem halfhearted in their attempt to be innovative. Many of the songs on the album feel flat and lethargic, with the often unenergetic backgrounds not supporting the soloists. This permeating lack of energy hurts even the stronger arrangements on the album, Patrick Watson's White Room and Where to Now St. Peter being perhaps the best examples of this.

The album's saving grace, energy-wise, is the Kanye Medley that finishes the album. The track brings out all the production bells and whistles, yet it still captures the dynamism and high-octane vocal sound that attracted me to a cappella in the first place. If the whole album had the drive of the Kanye Medley, this review would be a very different one. The Dynamics are obviously talented, and hopefully future releases will be able to display this talent by featuring it in a more exciting album.

To order this album, visit the group's website or Digstation.com.