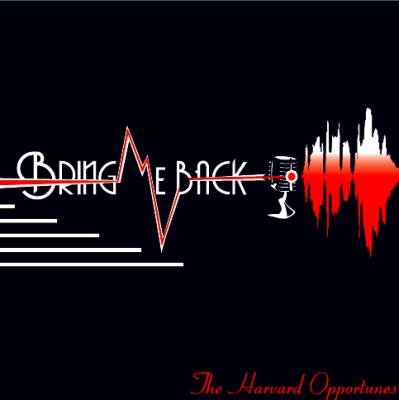 The Harvard Opportunes is a co-ed college group that tackles a breadth of songs and genres on its latest, Bring Me Back. There's really quite a lot to enjoy here, when the group is on its game.

The arrangement for Happy Ending expands in each section of the song, growing to a rich roar by the song's end. Not only is the arrangement great, but the song is recorded with such crispness and precision that it's a clear standout on the album. The group has an equally chilling build and growth on the watercolory Say (All I Need). Soloist Abigail Cushing takes a beautiful lead on Samson; I just wish that the rest of the group had been mixed a little lower to let her solo voice pop a little bit more.

What these three songs share is the slow build of a mid-tempo song: that's the Opportunes' strength on this album. And what the Opportunes don't have is diva power. The group certainly tries — and comes close on the fiery Last Name. But other such solo-driven songs either fall flat (Lady Marmalade) or sound monotonous and lack the nice dynamics that the group shows elsewhere (Right Here (Departed)). Add to that the weakness of a few other tracks (in particular, Gravity just sounds mushy in its phrasing), and Bring Me Back becomes an album that doesn't stand up quite as strongly to other similar groups and albums.

The group has continued its tradition of a top-40 medley called Let The Music Play (woven together with threads from Shannon's 1983 hit of that name). Unfortunately, the group has the same uneven success with this track that it did with the similar track on Off the Page: most of the transitions are super-choppy (one good exception: a deft mash-up of the title song with Sean Kingston's Fire Burning that transitions smoothly to Rhianna's Disturbia), some songs don't lend themselves to the medley treatment (the vocal effects on Kanye West's Heartless really stick out), some songs lack energy (the sing-song call-and-response of "with the fur!" from Flo Rida's Low just sounds off), and the group starts the medley with one of the weakest segments, Jason Mraz's I'm Yours. The medley is a clever idea: it's a way to showcase many soloists in one track, it lets a group sing the latest and hottest songs, and performing a similar concept on every album gives continuity with alumni. But medleys are often more difficult to execute than single songs: component songs need to be woven together coherently and compellingly, and they need to tell a story. The Opportunes never achieve that with Let The Music Play; instead, it just sounds like someone hit "scan" on the a cappella radio — with all the incoherence and jumpy transitions that brings. Maybe that's the effect the Opportunes were going for, but it's not easy on a listener.

There's certainly more to Bring Me Back than Let it Play, but the track shares the same strengths and weaknesses with the rest of the album: when the group really nails an arrangement, the result is magic. But the Opportunes haven't figured out how to achieve that same effect on an entire album.

Bring Me Back, the latest from the Harvard Opportunes, opens with a cover of Chris Brown's Forever, an R&B track with thumping basses and sampled, sequenced percussion making my car's subwoofer dance. This is a sound the Opportunes handle nicely, and while the production feels a bit heavy, it's appropriate for slick club-style tracks like the opener and Brandy's Right Here (Departed), or the shiny country-pop sensibility of Last Name. However, the same heavy, auto-tuned pop sound seeps into the production on intimate, emotional ballads like Samson, and completely belies the folksy sound the soloist is attempting to evoke on Fire and Rain. The only track that really escapes the pop filter is the group's traditional alumni song, Change In My Life. I'm used to a subtler approach from veteran producer John Clark, who's credited with recording, engineering, and producing (the last with two members of the group).

The irony is that I would have actually liked more consistency in the production on Let The Music Play. Every year, the group uses the Shannon hit as the skeleton for a pop-song medley. The trouble with the latest recorded version is that each of the multitude of songs stuffed in as interpolations (ranging from I'm Yours to Disturbia) is produced as though it were a track of its own. This leads to awkward transitions and points where the low bass or the Auto-Tune cuts in and out depending on the aesthetic of a particular segment. Kanye West's Heartless, in particular, stops the track dead, totally changing the tempo and mood only to revert after a twenty-second excerpt. Some of these renditions made me want to see what the Opportunes would have done with full versions of the songs, but the stylistic mishmash approach had me getting lost in the seven-minute musical picaresque.

The rest of the arrangements are largely straightforward but effective, and the soloists are all strong enough that it's difficult for me to pick a favorite. They are at times a bit overwhelmed by the heaviness of the production, but generally manage to hold their own. I've followed the Opportunes on and off for about ten years, and they keep getting better, a bit at a time. This is a perfectly respectable release, but if they can get a better handle on what "their" sound is, and line up the right combination of repertoire and production to match, the next album could pass respectable and go for greatness.

The power of an energetic recording in a cappella music, or any music for that matter, cannot be overstated. That the Harvard Opportunes understand this is extremely evident on their 8th studio album, Bring Me Back. The entire album has an undercurrent of intensity that is extremely compelling to listen to, and this energy is Bring Me Back's saving grace. What could have easily been a passable but ultimately uninteresting album ends up being a very a enjoyable listen.

The Harvard Opportunes are not the most innovative collegiate a cappella group, but they're good at what they do. Their chords are tight and lock with precision. Their group sound is unified without sounding over-processed, and individual voices are still present in the background parts. The production is good as well, achieving a clean and professional sound that really compliments the vocalists. The vocal percussion is very inoffensive, which sometimes is all you can ask for. Say (All I Need) showcases the best vocal percussion on the album: moody and intense. The lush backgrounds early on in Gravity are really beautiful, and they showcase the group's clearly apparent musicality. Happy Ending builds wonderfully, both musically and dynamically. There is a lot to like on this album.

The album falls short of a cappella greatness on a couple fronts. The arrangements are a bit of a mixed bag: overbearing background parts, poor syllable choices and general busyness plague several songs on the album, and the re-invention of James Taylor's Fire and Rain didn't work for me at all. Soloists on the whole are weaker, with two solid exceptions: Jordan Reddout's wonderful turn on Carrie Underwood's Last Name, combining country twang with Xtina style delivery, and Molly Swenson's sensitive and haunting delivery of Sara Bareilles' Gravity. I'm also very confused by the strange medley Let The Music Play ... other than Shannon's saucy number reappearing a few times, it seems like a group of unconnected pop hits. Most of the medley pieces are of high quality, but I feel like I'm missing out on the underlying concept. Let the Top-40s Hits Play? Let the Overdone A Cappella Covers Play? I have no idea. The radio jingle-esque ending is fun, though.

Bring Me Back isn't a perfect album, or even a great album, but it's certainly worth your time. The Opportunes really showcase themselves here as a hardworking, musically gifted, fun-loving group of college students. It'll be interesting to hear what else they'll record, because they've really produced a nice album.

Oh, and though it sounds nice, the group probably could have left off Change In My Life, or buried it somewhere else on the album. A thirteen year-old Rockapella cover doesn't really jibe with the rest of the album.

To order this album, visit CDBaby or the iTunes Store.