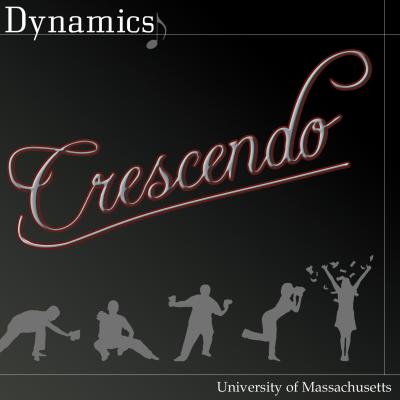 The Dynamics is a mixed group out of the University of Massachusetts and Crescendo is their first album. In a nutshell, this album defines average collegiate a cappella on every level. It won't win any awards, but fans of the group will happily own it.

I've had the CD in my car for a while now and the two tracks I skip to while country radio is on commercial are Cablecar (Over My Head) and Such Great Heights. Why? Because both of these songs feature Faisal Abid as a soloist (that duty shared with Emily Wilson on Such Great Heights.) There is something about his voice that I just adore — something about his slightly raspy tenor is so soothing. Emily Wilson also delivers on Such Great Heights, the best track on the album despite the out of place bridge when the song briefly turns into Let Go by Frou Frou.

Listening to the album, one would think that the Dynamics is a women's group with guest male soloists — of the 9 tracks, only 2.5 are sung by men, and 1.5 of those by Faisal. But with the exceptions of Emily and Corrine Byrne on She Will Be Loved, the female soloists sound like they are just phoning it in. The result is soporific.

Next time, I hope that they pump up the energy and I expect to hear more Faisal since he doesn't graduate until 2010.

Let it be said, Crescendo by The Dynamics from the University of Massachusetts will be the breakout album of the year from an unknown collegiate group. Think of them as the Ramifications of '07. As it stands, Crescendo is possibly the best mostly-unadorned collegiate album that I've heard in years. And to keep it even more along the Suffolk Ramifications tip, Crescendo is also a debut album. Man oh man.

Great singing is the cornerstone to this album. Everything is smoothly delivered. There is a clarity and precision to their group sound that simply jumps out from my speakers. I found myself singing along to songs that I'm sick of, and that's a rare feat. Each vocal line works as a unified voice, blending into this amazing wall of sound and phrases. These kids are excellent musicians, masters at nuance, tempo, stillness and yes, even dynamics. Kurt Jalbert, the dedicated percussionist, has a pretty good arsenal. Nothing too distracting, but ever present and solid.

Crescendo is enhanced by rich production values. As I said, the album is mostly unadorned, or it at least sounds that way to these ears. Occasional reverb here, some layering there, but not a lot of fire and brimstone. And that approach serves the group well. None of the soloists are particular standouts, but they are give commanding performances that are entirely enjoyable.

As I've mentioned before, what really keeps this from being a top notch album for me is the fact that all of the arrangements were bought from professional services. There's nothing wrong with that, per se, but it does make me think that there's no confidence (or talent) in the group to pull off a feat. That's a shame. On the other hand, kudos out there to those arranging services, because most of the arrangements are totally kick-ass. The ending of She Will Be Loved blew me away. The Blake Lewis-inspired Time of the Season found me completely enamored of a song I'd never heard before the American Idol performance. Don't Know Why doesn't work as a closing track. And the ending of Such Great Heights (an elongated ee-you) seemed a little ridiculous, but everything before that was mystifying, so I had to lay down the props.

Get this album and be dazzled.

Crescendo, the latest release from the Dynamics, was a tough album for me to wrap my head around. Having enlisted fellow RARBer Randi Stanley as producer and arranger of two tracks, and utilizing arrangements by Deke Sharon, Stacey Lear, Bradley Stephenson, and Nicole Scott, the Dynamics seemed to limit themselves to the singing, the album art, and some production from Andrew Rozynski.

It is this disconnect, though, that saves this album. You see, the Dynamics aren't outstanding singers. Soloists are merely average. Even Corrine Byrne, who shines on Love, Love, Love falls a little short on She Will Be Loved. Faisal Abid does the same; he gives an underwhelming performance on Cablecar (Over My Head) but a lively and well-executed one on Such Great Heights.

Crescendo benefits from the nicely crafted arrangements. Nicole Scott wrote a beautiful soprano part and added a nice touch to the opening of Love, Love, Love and Stanley's take on Such Great Heights does a nice job of emphasizing some beautiful parts lost in the original. And Sharon's Don't Know Why, mixed to emphasize the bass line, is a nice end to the album. The Dynamics give strong, lively performances to compliment these arrangements, the results being the album's three best tracks.

But between the strong start and finish Crescendo settles in, revealing itself as a lively, pleasant, but ordinary. The only hiccup is Crazy, on which the Dynamics just don't come close to replicating the energy and intensity of the original. I found myself listening to the album often, but the lack of a strong track to anchor the middle puts a noticeable damper on the listening experience.

Apart from the musicality, Crescendo could benefit from small touches here and there. The album art is amateurish and the liner notes look more like a yearbook ad than anything else. Though I appreciate that Dynamics took the time to enter the album information onto Gracenote, they misspelled track titles and the name of the album itself.

The Dynamics may be far from making the "jump to great" they speak of in their liner notes, Crescendo shows promise. The next logical steps are to transition to using their own arrangements and to hone their solo performances, touches which I hope the Dynamics incorporate into their next album.